For Jonathan Arogeti this Hanukkah is about a return to tradition — personal and collective.

As a child, he never missed a Hanukkah Bazaar at Congregation Or VeShalom, Atlanta’s historic Sephardic Congregation. The Bazar was and still is a highlight not only of the Arogeti family calendar but of the entire Jewish community -Ashkenazi and Sephardi alike. His favorite aspect as a kid were the arcade games.

But then Arogeti was off to college, working in Washington D.C. and then serving in the Peace Corps in Mali; making it home for the bazaar was just not in the cards. At 28, he has moved on from arcade games but recently returned to Atlanta intent not only to attend the Bazaar but also to make up for lost time.

Each Tuesday, the young Arogeti joins his mother Beth, his grandmother Jeanette, his aunts, great-aunts and dozens of other volunteers to spend the morning cooking the traditional foods that are the highlight of the Bazaar.

Jeanette Arogeti has been cooking traditional Sephardi dishes her entire life. Born and raised in Atlanta, both of Jeanette’s parents came from Turkey as young people. Even as these immigrants embraced America in its fullest, they taught their daughter to be proud of her Sephardi heritage and the smells of spinach cooked with garbanzo beans, eggplant, rice cooked with tomato sauce and burekas regularly filled the home.

Cooking was part of the life of the community even then. “If there was a bar mitzvah or a wedding, the ladies would gather and prepare the delicacies together. They would make all the food themselves for the feasts and celebrations.”

Now 86, the senior Arogeti no longer cooks on her own. So the weekly Tuesday cooking sessions are an important way to connect with the tastes of Sephardic culture and with community. This tradition started 42 years ago when Or VeShalom hosted its first Hanukkah Bazaar. “Many of the traditional dishes are tedious and time consuming to make. The preparation for the bazaar gave young mothers and older women a chance to keep up traditions we might not have been able to do on our own,” explains Arogeti.

In contrast to Jeanette and Jonathan, Beth Arogeti did not grow up eating Sephardi foods. The fifth generation Atlantan was born into a German Jewish family and attended The Temple, the city’s oldest and largest Reform congregation. But when she married her husband Joel they agreed to raise their family at Or VeShalom as Sephardic Jews. She explains that though Sephardi culture and cuisine were “as foreign as Chinese. I was welcomed in with open arms.”

It was in the kitchen community that Beth felt “most spiritually connected.” “I learned life lessons like you have to work hard and take pride in the product.”

Standards are high among the ladies-and some men-who gather to produce the traditional Sephardi delicacies. Take the making of the classic Biscochos (twice-baked sugar cookies). “The dough needs to be rolled out pencil thin before it is twisted and made into the signature circle shape,” Jonathan explains, “the older generation always checks and makes sure that each strand of dough is not too thick.” 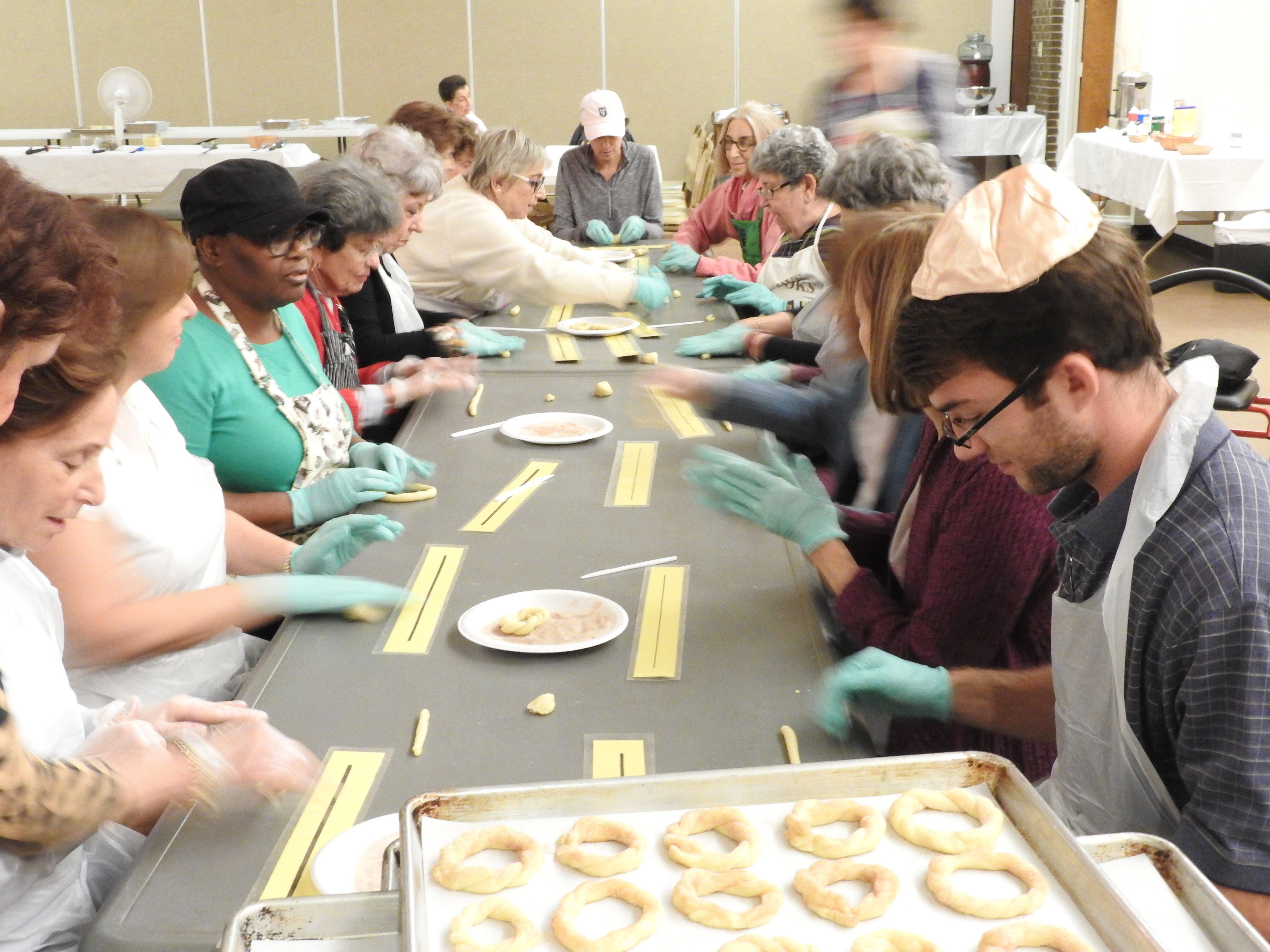 Preparation for the Hanukkah Baazar takes months of communal cooking. But it also affords the members of Or VeShalom a unique chance to be together. In fact, it was the opportunity to spend time with her mother-in-law that originally drew Beth to the Tuesday gatherings. Today she also values the opportunity it affords her to spend time with her son. The combination of family, community and tradition is similarly what draws both the older and younger generations. Jeanette, like her sisters, cousins and friends, enjoys the weekly time to be together. Jonathan, like several other young members, made taking a new job in Atlanta contingent on being able to participate on Tuesday mornings.

It is not just the ability to be with family and community but the quality of the time they share that brought this young Arogeti back to Or VeShalom’s Hanukkah Bazaar committee. Having lived in many places, he is aware that every culture has a version of the filled pastries that take the form of the burekas that are a highlight of the yearly festival, but even though his family left Turkey three generations ago, cooking with the folks at Or VeShalom makes him feel rooted to that far away place and to a long historical tradition.

If you can’t make it to Or VeShalom’s Hanukkah Baazar you can try and make their Biscochos at home -just remember to roll the dough into pencil-thin strips.

Take walnut-sized pieces and roll down on the table with palms of hands into a rope 5 inches long and only ½ inch thick.

Join two ropes side by side and twist them together.

Take the twisted strand and join ends into a bracelet shape.

Dip one side into sugar and cinnamon topping.

Bake for 12 minutes until lightly brown.

Remove from pans while still warm.

Reduce heat in oven to 200 degrees.

Cool and store in sealed containers.

There’s a not-so-funny joke that goes, “A man walks into a Chinese restaurant and says to the waiter, ‘Excuse me ...