I was raised in a Jewish home by Jewish parents, but the two sides of my family have vastly different origins. On my dad’s side, we’re all a similar flavor of Russian craftspeople who settled in places like Brooklyn. On my mom’s side, we are the Scotch-Irish who made the foothills of Alabama, Tennessee, North Carolina and Georgia our sloping home. One side is immigrants with traces of Yiddish speckling their New York accents, and the other has a lilt and twang cutting through their sentences like a river through a valley. Half built a living among the iron and brick of a great city while the other farmed atop veins of metals and clay. Their food and their stories all taste different, but they all taste like home.

When I was growing up in Georgia, my mom used car rides as a time for family history lessons, singing old bluegrass ditties and telling folk legends. Many of them included vaguely magical elements — mentions of ghosts and haints, a great-grandmother with the Sight, or mountain medicine that, by all modern accounts, shouldn’t be effective at all. These legends are as much a part of my heritage as that of the Burning Bush or Jonah and the Whale.

It has never been a question of whether or not the stories are true. They’re still powerful.

Similarly, the lessons from the Torah don’t have to be factually sound in order to be powerful. We give the stories their power in their retelling, keeping them alive and helping them be reborn in each new generation.

Although my extended families come from different faiths, my heritages are two sides of the same coin. I can hold as tightly to moonshiner ballads and pioneer superstitions as I can Hava Nagila and the Golem of Prague, and I firmly believe that the best way to end Passover is with a buttermilk biscuit. When we are invited to explore the richness of our own internal diversity and are encouraged not to reject either side but to embrace them both, the whole becomes greater than sum of its parts.

Recently, I have sensed this capacity for narrative evolution in my students who come from interfaith families. Some community members worry that the child will get confused if they are exposed to too many conflicting perspectives, or perhaps that one faith or the other is struggling to become the dominant context in the child’s life. Rather than worry, let’s listen to the story they have to tell: pieces of congruent cultures, faiths, and nations that weave together and imbue us all with the potential for communal growth.

Like many Americans, my family’s legacy starts with immigration, but this is not a story about assimilation; it is a celebration of mixed heritage. Likewise, it is not about belief or disbelief in differing histories, but about trust in the wisdom and power of oral tradition, whether independent of or resulting from faith. I will spend my life telling this story, one that is as classically Jewish as it is endearingly Appalachian. 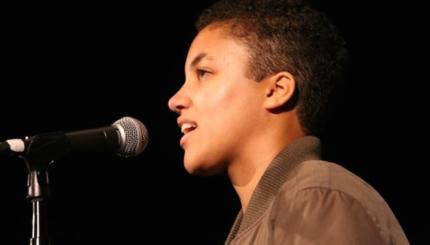