This evening begins Yom Hashoah, Holocaust Remembrance Day. It is a day set aside to remember the experience of the Jews in Europe during World War II at the hands of the Nazis, and the systematic destruction of Jewish lives and communities.

The hallmark of observance for years has been the testimony of survivors. Those who witnessed the horrors would share their stories of tragedy and survival, of lives broken and lives rebuilt. Whenever I listen to the story of one who survived I would always be amazed at the combination of opportunity and luck, strength and perseverance, fear and courage contained within these narratives.

READ: How Many Holocaust Survivors Remain Today, And What Challenges Do They Face?

And as I would listen to the testimonies, I would invariably wonder about my own potential for survival. Not to detract from those who did live through the Holocaust, but to personalize the experience, and to better understand the destruction we are capable of unleashing on one another as humans, and marvel at the ability for people to persevere under extraordinary circumstances. So just like at the recent Passover seder when we read in the Haggadah that “each person must see him or herself as if he or she personally left Egypt” so as to understand the experience of liberation, I would imagine as if I came out of the Holocaust, so as to understand the experience of terror and survival.

The observance of Yom Hashoah becomes more difficult with each passing year as the number of survivors dwindles. With each passing year, we draw closer to the challenge of how to commemorate the Holocaust when it no longer is the history of those who can tell their own stories but rather the history of those who can only share the stories of others. We, the surviving remnant, will be left with how to continue this narrative. What will it mean for generations of Jews to remember the Holocaust as the actual history becomes more distant?

One interesting question, I believe, about the future commemoration of the Holocaust is the most appropriate date on which to observe it.

Currently we commemorate the Holocaust on the 27th of Nissan in the Jewish calendar, on the date established by the government of Israel, which corresponds to the Warsaw Ghetto uprising. Or might we want to join with the other nations of the world and commemorate the Holocaust on January 27, on the date established by the United Nations General Assembly to coincide with the anniversary of the liberation of Auschwitz-Birkenau?

The two dates tell different stories. The first is an exclusively Jewish narrative, one that uses the Jewish calendar (thus the date changes from year to year in relation to the Gregorian calendar) and tells a particular narrative vis-a-vis the relationship of the Holocaust to the establishment of the state of Israel. The second tells a more global story, one that uses the Gregorian calendar and tells a narrative that is focused both on the Jewish victims and involves the nations of the world.

If the recently completed festival of Passover offers us any clues, it is how we can remember and transform history. Although millennia separate the events of the Holocaust and the events of the Exodus (and we can posit that the “history” of the Exodus is not actual history, but mythic history — a telling of events that, without knowing if they “actually” happened as described, is meant to convey a message), a similar approach may emerge. With Passover we at once remember and retell the story, and allow the story to be a paradigm for the future. “You were strangers in the Land of Egypt,” says the Torah, “therefore do not oppress the stranger.” Our story of liberation becomes a call to action to support the liberation story of others.

With each passing year, as we remember the Holocaust, let us remember that it is not just our story, but a universal story. We remember our stories of destruction, victimhood and survival. And at the same time, we can allow this story to be transformative, to be a means to link to other stories of destruction, and to be a call to action to fight against systematic oppression whenever and wherever it is made manifest.

We commit to never forget so we can say never again — for anyone.

A Painting of Pain & The Responsibility of Remembrance

As we prepare to commemorate Yom Hashoah, Holocaust Memorial Day, I’ve been thinking about my father- in- law, Leon Schipper, ... 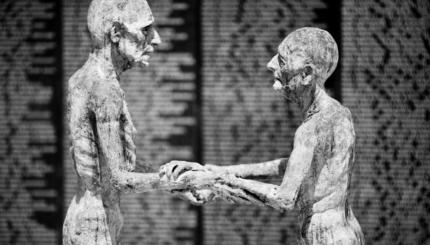