From Our Table to Yours: Rainbows & Matzah

Eat the Cheesecake the Obamas Eat

Next week marks the holiday of Shavuot. This holiday, which is celebrated seven weeks after Passover, marks the giving of the Torah. For a wide variety of reasons, Shavuot is celebrated by eating dairy. One reason I’ve heard is because having the Torah is as sweet as milk and honey. I’ve also heard that upon receiving the Torah the dietary laws of kosher became immediately clear –and the only dishes around were dairy dishes.

Regardless of the rationale behind it, eating a whole lot of dairy has become the common practice for celebrating Shavuot. To celebrate the occasion I gathered a group of friends to try baking a rainbow cheesecake. Too often the LGBT experience isn’t accounted for in the Jewish community so what better way to introduce the idea of inclusion than by bringing some literal rainbows to the table?

To start things off we found a recipe for tie-dye cheesecake from the Disney Chef. Here’s what you’ll need to get started:

Start by preparing the red velvet cake. You’ll find the directions on the package of cake mix.

After it’s mixed, pour 1/3 of the red velvet cake batter into a 9 inch springform pan. Then, go ahead and bake it according to the directions on the box. You can also make cupcakes with the rest of the batter, so nothing goes to waste.

Next comes more mixing. Set your electronic mixer to low and beat the cream cheese until light and fluffy.

Add sugar, a little at a time, and beat until creamy.  Add eggs, one at a time, beating well.

Next divide the batter evenly into 6 bowls. Use food coloring to create your colors of the rainbow.

Next, spoon the colored batter over the red velvet cake (which should still be in the springform.) You can either try to layer the colors, or create a mosaic of colors when you spoon the batter onto the cake. Leave 3/4 inch of space (at least) between the top of the batter and the top of the pan.

If you’ve gone with the mosaic pattern (like we did) and you want to create a tie-dye effect (like we wanted to), use a toothpick to slightly swirl the batter.

Place in the middle of the top rack of the oven and bake for 1 hour and 15 minutes.

An important thing to know about the baking process — it will take a while. After the initial baking time of an hour and 15 minutes has passed, prop open the oven door and leave the cake in the warmed oven for an additional hour. After that hour has passed, remove from the oven and allow it to cool to room temperature. After that, you’re still not ready to eat it.  Refrigerate the creation for at least 12, but ideally 24, hours. Then…. enjoy!

A few weeks ago a recipe started making rounds on the Internet. Not just any recipe, but a recipe for ... 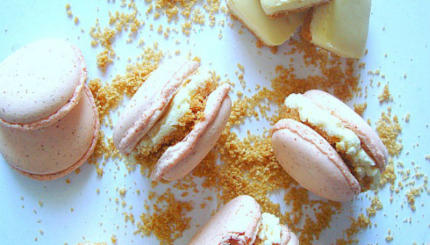 The humor in this dessert is that macarons are considered a very light and low fat dessert. Cheesecake on the ...