“An enduring monument to the Enterprise and Liberality of Our Israelitish Citizens”: A Beautiful Kentucky Synagogue

Today’s post features more Jewish history from Kentucky, the most recent state completed in our Encyclopedia of Southern Jewish Communities.

Keneseth Israel was created in 1926 from the merger of Louisville’s two oldest Orthodox congregations, both of which had been established by Jewish immigrants from Eastern Europe in the late 19th century. By the mid-20th century, a new generation of members had begun to chafe under the requirements of strict Orthodoxy.  After World War II, the younger members of the congregation, especially its women, began to push for mixed-gender seating.  In 1950, a group of female members, who normally sat in the synagogue balcony, held “sit-down strikes” in the downstairs men’s section during services.  During one of these demonstrations, the police were called to restore order, and some members threatened a court injunction to stop the protests. Keneseth Israel’s Rabbi Benjamin Brilliant supported the traditionalists and refused to continue services while women were sitting in the men’s section.

Finally, the board sought to strike a compromise by allowing women to sit on the main floor of the sanctuary separated from the men by a mechitza, though this solution did not satisfy the protestors.  Finally, after Rabbi Brilliant left Keneseth Israel in 1952, the congregation voted to institute mixed seating in the middle section of the sanctuary, with separate sections for men and women at the sides. Over the years, the congregation would continue to struggle with how to balance traditional Judaism with the demands of the modern world. Later, Keneseth Israel affiliated with the Conservative Movement and become fully egalitarian.

It’s quite remarkable that thirteen years before Betty Friedan published of The Feminine Mystique, which helped spark the second wave of American feminism, the women of Keneseth Israel decided to challenge the gender inequality of their congregation in such a direct way. Their effort is a perfect example of how most social change comes from pressure from below, even if it actually comes from the balcony!

Looking at the award-winning photograph “Chayla in Shul” I wonder:What is Chayla thinking? Here she is. Alone in this cavernous ... 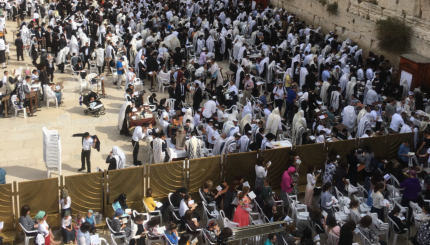 Mechitzah: Separate Seating in the Synagogue

A curtain or other divider separates men and women while they pray in some synagogues.

Last month, I had the pleasure of visiting Ashland, Kentucky, to conduct a series of oral history interviews.  The trip ...