The mechitzah is the physical barrier separating the men’s section and women’s section of an Orthodox synagogue.

In Orthodox congregations, men and women are not permitted to sit together during prayer services. The height of the mechitzah varies, and it can be a curtain, screen or even shelving or plants. In some synagogues, instead of being divided by a mechitzah, the women’s section is in the balcony and the men’s section is on the main floor of the sanctuary.

Origins of the Mechitzah

It is unclear exactly when mechitzahs came into use, and the halachic (Jewish law) issues are equally ambiguous. The wording of the Talmudic texts is unclear, and the codes nowhere explicitly require a mechitzah. There is neither a direct prohibition nor a direct requirement. Maimonides refers to the women’s section in his compilation of laws dealing with the ancient Temple and not in the section dealing with prayer and synagogue. Other medieval texts specifically mention using a parti­tion for public occasions such as the rabbi’s lecture.

The Mordekhai, a 13th-century German rabbinic authority, states specifically (Shab. 311) that a screen could be set up for such a purpose even on Shabbat. (One might question whether this permission to erect something on the Sab­bath, an ordinarily forbidden act, might not indicate the absence of a per­manent mechitzah in the synagogue.) It was not until the modern period, when the Reform Movement first removed the mechitzah and later insti­tuted family pews, that Orthodox responsa explicitly requiring a mechitzah for prayer services were written. Orthodox decisors today all agree that one can only pray in a synagogue with separate seating and a mechitzah.

The halachic process surrounding this one issue involves many levels of interpretation, differential weighting of sources, a variety of reasons, and a serious difference of opinion concerning women’s “disturbing” presence during prayer. In the last 150 years, the issue of a separation has taken on political overtones that impinge on the legal ones.

The legal questions raised are fascinating and begin with the ambigu­ous sources relied upon. The primary text is the Talmudic discussion of Mishnah Sukkah 5 :2, which states that on Simhat Beit ha-Sho’evah (the water-drawing festival, during Sukkot) they went into the women’s section and made a great improvement (repair) or a major enactment (u-matkinim sham tikkun gadol).There are other Mishnaic ref­erences such as Middot 2:5, and Sanhedrin :5, that add to the picture, but the Talmudic discussion in Sukkah 51a,b-52a is the most elaborate.

What exactly was the “new enactment”? The legal decision to sepa­rate the men and women is clear in the Talmudic discussion in Sukkah 51a-52a, but the questions as to how, why, and when remain. Was this reform, according to the Talmud, only for that one holiday, when levity reached a level that moral laxity was feared? Or does the Talmudic use of the text of Zechariah 12: 12-14, which relates that men and women were separated for mourning, indicate a known policy on the separation of men and women? What is the legal relationship of that text to other bibli­cal texts in which men and women mingle at public celebrations?

Fur­thermore, if men and women were separated for mourning, how is it that women still performed officially as wailers? Is that text, then, extend-able to all moments of holiness such as prayer? How did the Sages institute something new for. the Temple? Even with the agreement of a special court of 71, how could any changes be made when 1 Chronicles contains the injunction ha-kol be-khtav (all this in writing),which prohibits any change to the Temple structure? Given even that a physical structure is necessary, will only a balcony suffice?

Consideration of all the above questions, plus other factors such as the equation of synagogue with Temple and the authority of biblical law ver­sus rabbinic law, play a major role in the decision-making process of tod­ay’s rabbinic authorities. Primary attention is given here to the responsa—teshuvot—of Rabbi Moses Feinstein, in an attempt to elucidate the halakhic process surrounding this one issue. As one of the major Or­thodox rabbinic authorities of the 20th century, his views and deci­sions on this issue are significant.

For Feinstein, separation of the sexes is mandatory and is mi­de-oraita–having biblical authority. He deals directly with mechitzah in 14 separate teshuvot. Many responsa in the collection Igrot Moshe (IM)–the seven volumes of questions and answers authored by Feinstein–deal with the ways and means of separating men and women. For Fein­stein, gender separation is essential in order to preserve biblically man­dated morality. He strives to maintain this pattern in many different as­pects of daily Jewish life, not just in the synagogue. For example, a large number of his decisions require separate schools for boys and girls, even at the primary level. Having taken such a consistently strong position on male-female separation, it is understandable that he will legislate a strict position on mechitzah.

The halachic issue aside, the debate became one of denominational polemic that reached its peak in the 1950s in America. At that time, there were Orthodox congregations that had mixed seating. The Ortho­dox Movement’s Yeshiva University even allowed rabbinical students to accept posts in mixed seating congregations, with the hope that they would influence their congregants to change. Both those practices are no longer permitted.

Legal battles were fought in the 1950s in America, as Jews used the civil courts to force one or the other practice. One of the most famous cases was the Mt. Clemens case, in which one man, Baruch Litvin, sued his congregation for depriving him of his rights by changing the seating to mixed pews. The court ruled in his favor and the mechitzah remained. This case was an important element in the hardening of the Orthodox posi­tion. Litvin collected various rabbinic sources, statements, and responsa in the book, The Sanctity of the Synagogue. Though Ortho­dox responsa forbidding mixed pews had been written before, after the publication of Litvin’s volume, all Orthodoxy became defined by this one practice.

Excerpted with permission from Daughters of the King: Women and the Synagogue, edited by Susan Grossman and Rivka Haut (Jewish Publication Society).

Pronounced: muh-KHEETZ-uh, Origin: Hebrew, a partition or divider separating men and women during prayer services and other programs in an Orthodox synagogue. 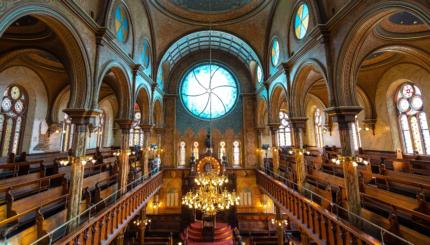 With rising numbers and increasingly stringent observance, Orthodoxy thrives even as it faces challenges.