In the spirit of Thanksgiving, let me be sure to say that I am thankful for everything and everyone that I have – with the obvious exception of my debt. The natural and man made crises of Hurricane Sandy and the Gaza/Israel stand-off are all the reminder I need that my problems have the unique fingerprints of truly fortunate.

A Debt Ceiling to Call My Own.
What is clear to me is that nobody thinks that I’m “too big to fail”. Be that as it may, but as of late it feels like I’m going over Niagara Falls without even the protection of a barrel. Worse, it feels like the soon to be met (again) National Debt Ceiling (12 Trillion) and the expiring Bush Era Income Tax cuts are of such monumental concern, that the citizens who make up the nation, and yes, our debt, can easily be forgotten. So, I’m going over the cliff alright, and like Wile E. Coyote fifty feet beyond the edge of the abyss, I’ve finally looked, and there is no where else to go but down. This wasn’t the American Dream I signed up for.

“However, there will be no poor among you, since the LORD will surely bless you in the land which the LORD your God is giving you as an inheritance to possess” -Deut. 15:4

Between my wife and I, we’ve got graduate school loans in the six digits. I remember the loan officer at my school saying, “don’t worry about it, your congregation will eventually take it over.” They did not. After the economy tanked, they could not. I bought a house in 2005 which is worth just over half the amount of the loan I took out on it. The mortgage broker said things like, “Let’s just see if we can get you into that home, and then we can refi later.” The value of the home was suppose to go up enough to pay off the student loans. Instead we were forced to work with the bank to modify the mortgage – but it’s still more than 50% of my take home pay from a good job that I love. The extra work that I used to have, that helped us get by, has dried up and gone the way of everything extra. Then there are the medical bills. Even with relatively “great” insurance, I’m in payment plans with a small handful of M.D. Sometimes patients have to teach their doctors patience. On top of all that, I’ve got to figure out how to pay for college for my four kids, so they can keep this cycle going – I guess.

“For the poor will never cease to be in the land; therefore I command you, saying, ‘You shall freely open your hand to your brother, to your needy and poor in your land.’ – Deut.15:11

Talk about a “debt ceiling”, I’m the epitome of a twenty-first century millionaire, I owe a million dollars, the ceiling of debt that by working hard every day every dollar I make can go to servicing that debt. Every month is dedicated to paying bills, not paying off bills, just keeping them current. Will John Boehner and Paul Ryan work something out with Nancy Pelosi, the Senate, and President Obama? I believe so. Will it help me? I know it won’t. Maybe if I was “too big to fail,” but I’m afraid that I’m too small to notice. Although I’m not innocent in this whole picture, I don’t believe the my situation is all my fault. There is something seriously wrong with a system that can allow well intentioned, well educated, hard working people, fall so deeply and so completely. On every front, student loans, housing failures, medical bills – I know I’m not alone, but it sure feels like it some times.

While the government tries to keep the country from going over the fiscal cliff, will they notice the tiny plumes of dust rising from the valley floor. Some of us have already gone over. 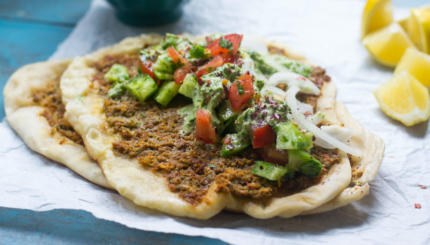 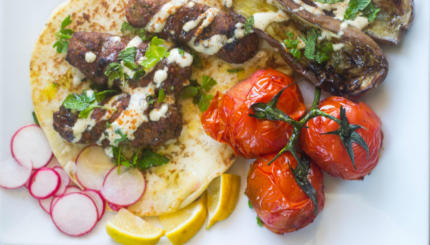 Turkish-style lamb and beef meatballs paired are paired with flavorful veggies for a grill-happy meal.