Iran: My Enemy My Brother

When Did Preemptive War Become a Jewish Value?

“Even if the messiah tarries, nonetheless, I believe and wait for him, but peace with Iran? Impossible.” When I asked a group of twenty well educated religious Jewish adults the question, “Can you imagine Iran and Israel making peace,” their unanimous answer was, “No.” Can you imagine peace in the Middle East in your lifetime? Call me crazy, but I can. What can I say, I’m a rabbi, I’m all about faith. I asked the group about Iran because they are largely seen as the most power negative actor in the region (by no means the only one, just the most troublesome). What to do about Iran? Like our congress, I have no idea, still, I believe we will eventually find peace.

Recently, the US Congress considered an increased oil embargo of Iranian oil, to teach them a lesson, to isolate them even further. Even as the Senate voted 100 to 0 to freeze the assets of Iranian Central Bank, they decided against an oil embargo against them. Why? Because even if the intension was to hurt Tehran, the result could very well be a rise in oil prices which actually helps Iranians instead. How to navigate around such a dangerous, crazy, and powerful foe? Again, I have no idea.

So why be hopeful? Again, I am a rabbi, I have a strong proclivity toward faith in a better future. But beyond that, there is a little known secret that keeps me going – pistachios. Israel and Iran have a long history together. I live in Los Angeles, with a large and proud Farsi community. The Tehrangelinos that I know, both Jewish and non-Jewish, religiously observant and not, all take great pride in the the Purim story. The story of Esther and Mordechai draws parallels, if not direct connection to, King Cyrus allowing the Jews back to Israel, and to rebuild the Temple. There is a connection. In fact, there is a tradition that there is a tunnel from Hamedan, Iran, the site of the Persian claimed

tomb of Esther and Mordechai, all the way to Israel (some claim their burial site to be in a forrest near Safed, Israel). Before the Revolution, and into the early 1980’s most of Iran’s weapons were American sold via the Israelis. See, we can play nice together (see Iran-Contra). Have the Israelis broken ties with Iran? They’d have to be nuts, and they are, for pistachios (In fact, there is really fun rumor that the payment for some of the arms were transfered via cheap pistachios).  According to an LA Times article, Israel has the largest per-capita pistachio consumption rate in the world. And their greatest supplier? Via third parties, Iran.

Do I really think that Middle Eastern Peace can be settled over nuts? Not really. But here is what I take from the lesson: Be it oil, or pistachios, or major arms deals, or even the even more potent concept so desperately sought by Iran’s majority of young people, freedom – no amount of Government intervention can shut down the back doors to what what people really want. It can take time, it can be difficult, but if it’s not impossible, well, that makes it possible. My concern is that we suffer from a lack of hope. Hope in a human future which is greater than today is perhaps the greatest by-product of a religious outlook on life.

The inability for religiously minded people to believe that there can be peace in the Middle East is to fly in the face of the great Prophets of Israel, and even for the non-religious, it is a stance so defeatist that it is no wonder there is such apathy around the cause of peace. Religious or not, faithful or pragmatic, there can be no progress without the idea of hope. That idea does not reside only with the Iranians, or the Israelis, or the Senate, or any single person. Hope is of the mind and of the soul. I am not so foolish as to imagine that just believing will make peace come (I’ve clicked the heels of my ruby slippers and nothing, so, It’s not like that route hasn’t been tried). I understand it takes work. My contention is with a mindset that says “we have to accept things the way they are.” A lack of hope is a poison.

To my mind, it helps accounts for the epidemic of depression and loneliness that we have become accustomed to in the fast paced age of the 21st century. Regardless of one’s religion, regardless or one’s religious observance of his or her religion, regardless if one even has a religion or not, I believe that hope, a move from darkness to light, is always possible. Ultimately speaking, faith and hope are the enduring purposes of Hanukkah, without a little bit of light, on future that we can only just imagine, we will sink into darkness. 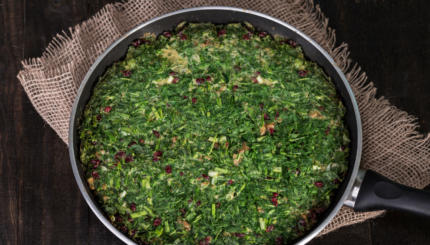 The 8 Jewish Persian Dishes You Need to Try

From herbaceous kuku sabzi to comforting gondi, you'll love every one!

A synagogue in today's Jerusalem bears the name Hajji Yehezkel.