While chickpeas–with their tiny stature and unassuming flavor–maintain a humble persona, their significance throughout history commands serious respect. One of the earliest plants to be domesticated for human use, chickpeas were first planted along with wheat, barley, lentils, and other ancient grains and legumes in the Fertile Crescent some 10-12,000 years ago.

Fittingly, chickpeas have long been a staple of Middle Eastern cuisine, found in everything from stews and savory pies to fritters to spreads. Hummus, which literally means “chickpeas” in Arabic, is arguably the most popular recipe in the chickpea canon. The exact origins of this spread of smashed chickpeas softened with tahini and olive oil are unknown, but likely stretch back for centuries.

Hummus continues to be a favorite throughout the Middle East, including Israel where, as Janna Gur writes in The New Book of Israeli Food, “Israelis hold hummus in such high regard that it is rarely made at home.” Instead, she writes, residents flock like pilgrims to their favorite hummusia (hummus joint) for plates of warm hummus topped with fava beans or a hardboiled egg and accompanied by plates of pickles and fluffy stacks of pita.

Vegetarians and health food enthusiasts like Mollie Katzen first helped to introduce the protein-packed spread to the American palate in the 1960s and 1970s. Today it is nearly ubiquitous: Sabra is becoming a household-recognized brand, hummus and pita platters show up next to mozzarella sticks and nachos on diner menus, and the dip has become a familiar-enough cultural reference to carry scenes in major motion pictures (i.e. the infamous “hummus scene” in Don’t Mess with the Zohan).

The New York Times published an article discussing hummus’ growing popularity in the United States, especially flavored versions that add savory mix-ins like sun-dried tomatoes, roasted red peppers, and avocado. MyJewishLearning.com’s blog Mixed Multitudes mentioned a New Hampshire-based company that launched a line of dessert hummus that includes flavors like caramel apple, chocolate mousse, and pumpkin pie. The three recipes below do not take hummus innovation to such extremes, but do offer some unexpected twists on the classic.

Smooth, fleshy, and slightly sweet, lima beans make a surprisingly delicious base for this hummus-style spread. If you decide to use them, the toasted peanuts add great crunch and flavor.

In a small pan over medium-low heat, toast the peanuts until lightly browned and fragrant, 6-7 minutes. Remove from heat and set aside.

Put all other ingredients into a blender or food processor and blend/process until smooth, stopping to scrape down the sides as needed. Served topped with toasted peanuts. Store excess hummus in an airtight container in the fridge. 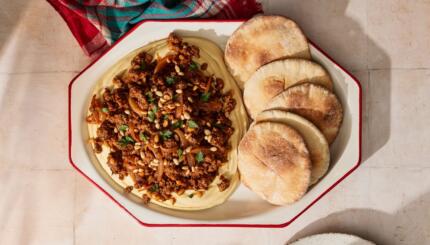 This hearty, meat-topped hummus will be your new go-to dinner.

Bold, fresh ingredients make for a delicious start (or middle, or end) to any day.

The Quest for the World’s Largest Batch of Hummus

Above: The Arab-Israeli town of Abu Gosh’s 2010 vat of hummus, and a record-breaking Lebanese dish of hummus that holds ...