Last spring, I received quite the shock upon opening my freezer for its annual pre-Passover cleaning. Inside, bag upon bag of forgotten scraps and ends of challahs-past sat shivering and waiting for redemption. I hadn’t meant to let my leftover challah situation grow so ugly, but there it was, staring me in the face. With only a few days before I needed to be hametz-free, I decided to feed some of the challah to my compost worms, and dump the rest of it (guiltily) into the garbage. But I promised myself that next Passover I would

Of course, there is little I can do about the weekly surplus of challah that builds up after Shabbat. The real conundrum is what to do with all those odds and ends that accumulate into a freezer full of old challah. Conventional Jewish wisdom seems to suggest one acceptable option: French toast.According to Arthur Schwartz’s Jewish Home Cooking: Yiddish Recipes Revisited, challah French toast first showed up on menus in the 1940s, but was made famous in the 1950s and ’60s by two Brooklyn restaurants, Wolfie’s and Cookie’s. “At Cookie’s and Wolfie’s,” he writes, “they served big, crisp-edged wedges of deep-fried, egg-saturated challah with a paper soufflé cup of cherry preserves.”

These days, challah French toast is so ubiquitous that recipes for it regularly turn up in mainstream Jewish cookbooks, and even some non-Jewish ones. Decades from now, culinary anthropologists may point to challah French toast as an example of American Jews’ distinct and fascinating contribution to traditional Jewish cuisine.

cinnamon & vanilla extract to your liking

The Night Before: Melt butter in a pan. Crumble brown sugar into butter and stir until combined. Spread mixture to cover the bottom of a glass baking dish. Double layer the challah into the dish.

Whisk eggs and milk together in a bowl. Add cinnamon and vanilla and stir to combine. Pour mixture over the bread, soaking it all the way through. (The wet mixture should almost cover the bread…if there’s not enough mixture, make a little bit more.) Cover baking dish and let set over night in fridge.

In the Morning: Uncover dish and bake in 350 degree oven for 40 minutes-1 hour. Serve warm with maple syrup. 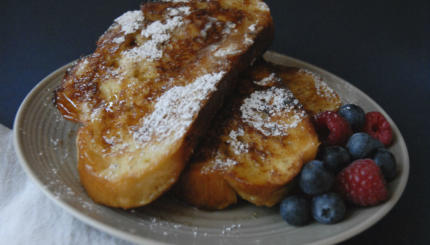 Classic challah French toast with just a hint of spice. 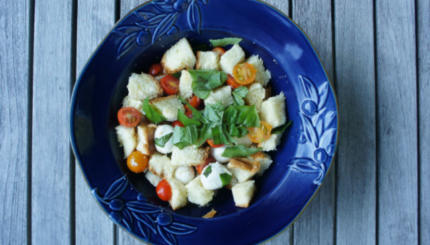 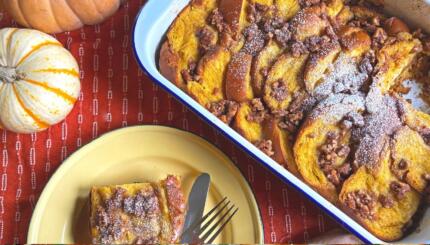 This make-ahead breakfast is perfect for feeding a crowd.