Elijah Gordon, aka Sølä, The Jewmaican, is a bright, up and coming musician and playwright who just released his first EP called “OnTrack.” On the EP, the 18-year-old explores his Jewish-Jamaican identity and culture through rap, spoken word, and singing.

Team Be’chol Lashon recently spoke with Gordon, who is a freshman studying drama at The New School and son of Lewis and Jane Gordon, professors at the University of Connecticut and longtime friends of Be’chol Lashon. Below are edited excerpts from the conversation.

You have a unique stage name. What inspired it?

I’m a writer. When I first started making music, I wanted to have a different stage name than my pen name, kind of like Donald Glover who uses his real name as his pen name and Childish Gambino as his stage name. The name Sølä stood out to me because my middle name is Solomon. Growing up my brother called me Sola for short. The name never really stuck, but I wanted to pay homage to my brother who inspired my love of hip hop.

Sølä isn’t quite as unique of a name as I thought. Apparently there are hella European musical artists who use Sølä as a stage name. So I decided to add on Jewmaican. My dad has a running joke in our family about us being Jamaican Jews; he would always call us Jewmaicans. As I got older it became less of a joke and more of a term that I thought perfectly blended my identities. Thus, Sølä, The Jewmaican. It just clicked for me. It was the perfect name to describe my truth, honor my brother and my dad who nurtured my love of music, and be unapologetic about my Jamaican and Jewish heritage.

Tell us what it’s like growing up in a Jewmaican family.

Both my parents were born and raised Jewish. My Dad, Lewis Gordon, is Jamaican and Jewish, and my Mom, Jane Gordon, is a white Jew from South Africa. Judaism has always been a big part of our lives. We would bake challah together, celebrate Shabbat and holidays. My favorite dish is my Dad’s kingfish latkes he makes at Hanukkah. I always knew I was Jewish, but my family did Jewish differently than other families. My parents wanted my siblings and me to be deeply connected to both our Jewishness and our blackness.

Before we moved to Connecticut, we lived in Providence, Rhode Island. Providence doesn’t have a big Jewish community, It’s mostly Catholic. I went to Hebrew school, so I knew a lot of the Jewish kids in our community, but my siblings and I were the only Jewish kids of color. My parents made sure that we knew that we weren’t the only Jewmaicans out there. They spent a lot of time making sure I understood and valued Jewish diversity from a young age.

I’m happy I’m a black Jew. I’m happy that I grew up with my family, who instilled in me a holistic love of Jewmaican culture. My family taught me to embrace who I am and live my truth. For me, when I think about embracing diversity, I think of it as speaking truth to power. When you embrace diversity you take the power away from othering.

I remember the first time we went to a Be’chol Lashon Think Tank and I saw Jews of every race and background from all over the world. It made me really appreciate and embrace the depths and layers of Jewish diversity. It was the first time I was able to have an open discussion about my identity and life experiences with Jews of color my age. It was really cathartic.

It sounds like your family plays a big role in your musical journey. Tell us more about how they influenced your EP.

You are absolutely right about that. My family definitely ingrained in me a love of music. My dad was a jazz musician in the Bronx before he became a professor. Growing up, our house was always filled with the sounds of Miles Davis and Duke Ellington. When I was younger my brother moonlighted as a production engineer. I’d watch him mix beats and I fell in love with hip hop. My dad and my brother were both mad supportive of my desire to begin making music.

When I was in eighth grade I met my best friend, Ryan Bottass, and we started making beats together. At first we were just playing around, making up crazy freestyles. Then I started writing lyrics. By senior year of high school I’d begun using my lyrics as a way to explore my identity and examine how I felt about something or what was on my mind. Ryan and I worked on this EP all of our senior summer and through winter break when we got back in town from university. It was amazing to work on something so meaningful with one of my best friends.

All of the songs on your EP are really different stylistically from each other. Why is that?

My songs are all different because “OnTrack” is a self exploration project. I wanted to focus on what it’s like to be figuring out who you are on the stage to adulthood. As a Jewish person I’ve been thinking about what it means to be an adult since I was 13. I’ve been so many things between now and then. I’ve gone through many changes and adjustments in such a short amount of time: going to college, living away from home, becoming a young black man on a predominantly white campus—different stages that I’m going through, but also embracing those changes, and embracing myself, my truth, and who I am becoming.

Going to college while black is a huge deal. There are so many barriers out there: financial, environmental, systematic. I’m so lucky and grateful to be in the position I’m in. My dad was the first in his family to go to college, and I’m proud to be continuing his legacy.

What’s next for you?

I’m collaborating with Ryan Bottass again on a project we plan to release in September. It’s tentatively titled Mood Projector.

“OnTrack” is available to stream on Spotify and buy on iTunes. 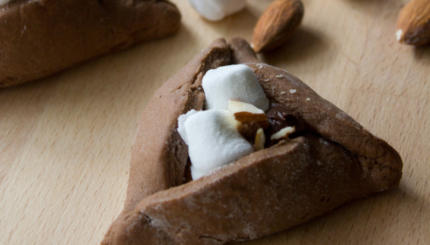 If I had to choose only 5 foods to have for the rest of my life, ice cream would be ...