First, a recap from the The Daily Show:

Last night, the Park Slope Food Coop had a special election, deciding whether to boycott all Israeli-made products. Because we are the Coop and are totally masturbatory overprocessing Brooklynites, it wasn’t actually a vote — it was a vote about whether or not we should have a vote.

Anyway. This international BDS movement (I keep wanting to say “BSDM movement,” and really meant to slip up accidentally-on-purpose on stage last night, but forgot to) has been trying to infiltrate the Co-op for the past few years. It always comes up, but last night was the real boiling point. Two thousand people packed into an auditorium. Supposedly it cost over $10,000. The election would’ve cost another $20,000. The entire assembly was people speaking for one or two minutes. It was a LOT of people.

I’m a walker, and I’ve gotten into some of the best fights of my life at the Coop. We’re all different. We have nothing in common except for the fact that we like really good food. And that’s the way it should be. I’m a vegetarian. I totally think the Coop shouldn’t sell meat. I also really hate lima beans, and I’d encourage everyone not to buy them. But I don’t think it’s right to ban other people from buying them. Keep listening to each other, people, and please, keep the arguments alive. Don’t just ban them.

* Got home. Our boarders were like, “You’re Internet-famous.” Went through the tweets, and there were a ton of references to “the hyper Hasid” and “this surfer with payos.” Hey, I even got my own Twitter hashtag, which is super awesome and flattering, if ephemeral. Amy Sohn said “a star is born” about me! My friend Liz wrote, “Highlight 4 me was @matthue on his hatred of lima beans.” P.S.
my mom is so gonna kill me.
* There were a lot of BDS people at the vote last night. A lot of them weren’t actually coop members; they were just there to protest. I asked them, and they were really forthcoming about it. Totally fine for them to be there. On the other hand, they were the only ones not waiting to be admitted, which meant that the reporters got to speak to a lot more of them than anyone else–say, for instance, actual coop members. I’d call it “infiltration,” but then again, I watched every episode of the X-Files (not an exaggeration) and love conspiracy theories.
* I was one of the last people to speak. Itta said the people around us (big BDS shippers) didn’t understand what I was saying — granted, I’m not entirely coherent; I talk really fast and get bubbly, and the mic was really loud. On the other hand, I got stopped by a ton of people on the way out complimenting me. Granted, they were mostly old Crown Heights Hasidic ladies, but they were still awesome.
* I still want someone to ask if I’m in favor of the BDSM movement so I can just say, heck yeah! 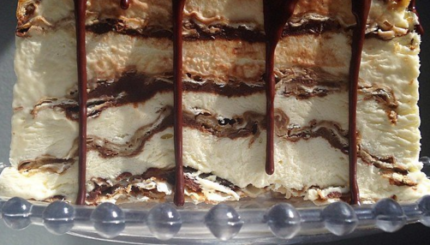 Tiramatzu: A Delicious New Way to Eat Matzah on Passover

The Jews as a nation in the land of Israel

Recipes for the Jewish New Year.