Ze’ev (Vladimir) Jabotinsky — Zionist leader, writer, orator, journalist and soldier— and the Zionist Revisionist movement he founded have been steeped in controversy, but have left their own distinct mark on the course of Zionist history, despite years of anti-establishment status.

Ze’ev Jabotinsky was born in Odessa in 1880. Odessa was at its height as a center of Jewish and Zionist activity; still Jabotinsky grew up steeped in Russian, more than Jewish, culture. At age 18 he left Odessa for Switzerland and later went to Italy to study law.

Ze’ev Jabotinsky’s promise as both a leader and a critic had already surfaced at the age of 14 — in a critique of the grading system, which he published in a local paper. In Bern, he began a lifelong writing career, serving as foreign correspondent for two Odessa newspapers (writing under the pen name “Altalena”). He joined a Russian student group and became interested in both socialist and Zionist ideas.

Jabotinsky’s articles were so popular that in 1901, his paper recalled him to Odessa to join the editorial staff. Under the impact of the 1903 pogrom in Kishinev, he soon became immersed in Jewish self-defense as well as Zionist activities. Elected as a delegate to the Sixth Zionist Congress, Jabotinsky was deeply impressed by Herzl. Envious of the fluent Hebrew he heard spoken at the Congress, Jabotinsky — who already spoke Russian, French, English, German and various Slavic languages — set about gaining mastery of Hebrew, becoming an accomplished orator and translator. His writings include both original works —poems, plays and novels as well as polemic and philosophical tracts— and translations of classics, including an unparalleled rendition of Edgar Allen Poe’s poem “The Raven” into Hebrew, and the works of Hebrew national poet Chaim Nachman Bialik into Russian.

Jabotinsky rose to prominence as a professional journalist and provocative publicist–but first and foremost as a gifted and passionate orator. As a speaker his tone and message introduced a sense of urgency, not always shared by mainstream Jewish leaders, to Zionist deliberations and aspirations.

He traveled widely all over Russia and Europe — lobbying for the Zionist cause in Constantinople following the Young Turk revolution — advocating unrelenting international political activity along with ongoing Jewish settlement in Palestine.

Jabotinsky stressed the importance of learning Hebrew, which he perceived as a central element in nation-building — even serving for a brief stint as elocution teacher for the founding actors of the Habimah Theater, the first Hebrew-language theater troupe, destined to become Israel’s national theater.

While socialist Zionists encouraged Jews to fight for their civil rights as Jews within the countries of their origin, Jabotinsky was skeptical of this avenue of emancipation, proclaiming that salvation for Jews–both on a personal level and as a national entity— lay only in the Land of Israel.

Jewish self-defense was at the epicenter of Jabotinsky’s socio-political philosophy, both as a physical imperative and as a wellspring of pride and self-confidence, capable of “ennobling” the Jewish spirit.

With the outbreak of the World War I in 1914, Jabotinsky found himself in disagreement over strategy with prevailing opinion within the Zionist camp. Unconvinced that the Turks or the Arabs would accommodate the aims of Zionism, he advocated bolder tactics. As he was convinced of an ultimate Allied victory, Jabotinsky, together with Joseph Trumpeldor, called for the establishment of a Jewish fighting force to join the Allies in liberating Palestine from Ottoman rule. Thus they could earn a place at the peace table, with the right to demand establishment of an independent Jewish state in Palestine.

While both the Allied powers and mainstream Zionists were at first reluctant, the Zion Mule Corps was formed in 1915. The corps fought in Gallipoli, but was later disbanded. Despite objections by the official Zionist leadership, which favored neutrality in order not to jeopardize the Jews of Palestine, Jabotinsky convinced the British government to permit the formation of three Jewish battalions. A man of action as well as words, Jabotinsky became an officer in the 38th Royal Fusiliers, which fought with General Allenby in 1917, and was decorated for heading the first company to cross the River Jordan into Palestine. After the war, Jabotinsky wanted to maintain a Jewish unit as defense against growing Arab hostility to Zionism, but the unit was disbanded by the British.

Settling with his wife and two children in Palestine, Jabotinsky became editor of the Hebrew newspaper, Hadoar. During the Arab riots in Jerusalem in 1920, he organized Jewish defense. Subsequently, Jabotinsky was arrested and sentenced by a British military court to 15 years in jail, for illegal possession of arms. He was released several months later.

In the same year, he again became active within the Zionist establishment. However, since WWI, during which he had championed alignment with England, he had became disenchanted when Great Britain severed almost 80% of Mandate Palestine originally designated for a Jewish Homeland to create Transjordan (1922). Disillusioned with Britain and angry at Zionist acquiescence to British reversals, Jabotinsky resigned in 1923 from the Zionist Organization.

He set about establishing a separate Zionist federation based on “revision” of the relationship between the Zionist movement and Great Britain. This federation would actively challenge British policy and openly demand self-determination–Jewish statehood. The goals of the Revisionist movement he founded included restoration of a Jewish Brigade to protect the Jewish community and mass immigration to Palestine–of up to 40,000 Jews a year.

In 1925, the establishment of the World Union of Zionist Revisionists was announced, with Paris as headquarters for the movement. Jabotinsky spent the next years actively lecturing and collaborating on dozens of publications to further the cause worldwide. He lived in Jerusalem between 1927 and 1929. In 1930, while on a speaking engagement abroad, the British administration barred his return to Palestine by canceling his return visa. Unable to return home, from that point until his death a decade later, Jabotinsky fought for the Zionist cause around the world. In 1931 Jabotinsky demanded that the Seventeenth Zionist Congress make a clear announcement of Zionist aims–a Jewish state–but the delegates refused to do so.

Seriously alarmed by Hitler’s rise to power in Germany, Jabotinsky pressed in 1933 for a worldwide Jewish boycott of Germany, hoping to crush Germany economically, but Jewish and Zionist leaders declined to cooperate. In 1934, an agreement was signed between Jabotinsky and David Ben-Gurion, then Labor Zionist leader, general secretary of the powerful Federation of Labor and undisputed spokesman for mainstream Zionism in Palestine. The agreement was aimed at easing the growing conflicts between the groups; cooperation, however, was stymied when the Federation of Labor failed to ratify the agreement. Revisionists and Laborites were to remain bitter political adversaries for decades to come.

In 1935, the Revisionists withdrew from the Zionist Organization in protest over the organization’s refusal to state clearly and unequivocally its final goal of statehood. Revisionists also claimed that the Zionist establishment was too passive, failing to challenge British restrictions on the pace of development of the Jewish National Home and thwarting attempts by Jews to flee Europe to the safety of Palestine. Jabotinsky focused his efforts on assisting Jews to reach Palestine by all means — legal or illegal. Sensing that Jews of Eastern Europe were in great danger, he called, in 1936, for an “evacuation” of Eastern European Jews to Palestine to solve the Jewish problem.

Outspoken and candid, Jabotinsky appeared before the Palestine Royal Commission in 1937 declaring that the “demand for a Jewish majority is not our maximum — it is our minimum. Stressing there would soon be 3-4 million European Jews seeking a safe haven in Palestine, he compared “Arab claims to Jewish demands” as akin to “the claims of appetite versus the claims of starvation.” He and his followers argued that all territory in the original 1920 British Mandate over Palestine— encompassing all of the Land of Israel on both banks of the Jordan River–should be part of the Jewish homeland.

When the Peel Commission recommended the partition of the remainder of Mandated Palestine into two states, Jabotinsky opposed the plan. While Zionist leadership reluctantly accepted it, feeling that a truncated state was better than no state, the Arabs rejected it.

As conditions in Europe worsened, Jabotinsky began to support underground armed resistance against the British in Palestine, and, in 1937, officially became the supreme commander of the Etzel— the Revisionist underground military organization. He continued to focus on the rescue of Jews from Europe by all means available— including some of the first attempts to circumvent immigration restrictions by the clandestine landing of immigrants who arrived by sea. His plans for the future included a Jewish army to be formed after World War II.

Jabotinsky died suddenly of a heart attack on 4 August 1940, while visiting a summer camp operated in New York by the Revisionist youth movement — Betar.

Throughout his life, Ze’ev Jabotinsky was convinced that Jewish statehood was an historic necessity that must and would come to pass. In his writings he recalled how, at the age of six, he had asked his mother whether the Jews would ever have a state of their own.” His mother had retorted: “Of course, foolish boy.” Jabotinsky, who devoted a lifetime to the realization of a Jewish state, never questioned the validity of her reply. In 1935, five years prior to his death, Jabotinsky composed his will, stating that should he die, he could be buried anywhere, but requested that his remains be transferred to Israel “only at the instructions of a Jewish government ki takum–“that shall be established.” No “ifs.”

In 1965, Ze’ev Jabotinsky’s remains were brought to rest on Mount Herzl in Jerusalem.

Reprinted with permission from the Israel Ministry of Foreign Affairs. 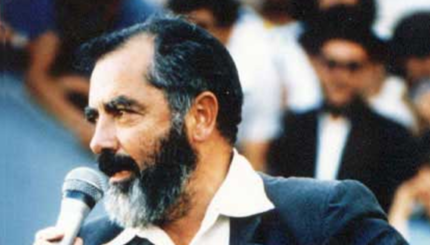