Over the last few days, the Gemara has addressed various cases in which a man is prohibited from marrying a woman if he had been instrumental in helping free her from her previous marriage. This situation might occur if the man delivers her get (bill of divorce), refuses to free her from a vow she has made distancing herself from her husband, or serves as a witness to her husband’s death. In these cases, the marriage is disallowed due to a fear that rumors will circulate suggesting that the man in question may have orchestrated the woman’s freedom so he could step in.

On today’s daf, we see cases where the marriage is permitted to go forward.

And for all of these (who were involved in permitting the wife to remarry — i.e., the judge, the agent who brought a bill of divorce, and the one who testified for a woman that her husband died), if they had wives and their wives died thereafter, then they are permitted to be married to them.

And all of these (women who were prohibited from marrying a certain man due to some suspicion), if they were married to others and then were divorced or widowed, they are permitted to be married to them (i.e., to the judge, messenger, or witness who permitted her to remarry).

The first ruling of the mishnah says that if one of the men involved in effecting the nullification of a marriage is already married to someone else and then his wife dies, he’s allowed to marry the divorced woman. The second rule states that if a woman barred from marrying someone on account of a suspicion subsequently marries someone else and then becomes widowed or divorced, she is allowed to marry the man to whom she was previously forbidden.

The Gemara here seems to presume that if a man is already married, that somehow insulates him from the suspicion that he is working to free the woman because he wants to marry her. But why is that assumed? After all, the entire tractate of Yevamot is predicated on the fact that a man might have more than one wife, an assumption that underpins pages of discussion about whether yibbum or halitzah is required — not only for a wife, but for a co-wife too. Something else must be going on.

I think there are actually two explanations. The first is rabbinic squeamishness about the idea of multiple wives. Although the Torah shares many examples of polygamy, none of these relationships were harmonious (the Hebrew word for co-wife is tzara,from the same root as the word for “trouble”) and most talmudic rabbis frowned on the practice. Later in Yevamot (65a), we’ll see one rabbi rule that a woman can force her husband to divorce her if he takes a second wife.

According to the Jewish Encyclopedia, of all the rabbis named in the Talmud, none is described as having more than one wife. This fact alone could explain why a man wouldn’t fall under suspicion of having motivation to marry another woman while his wife is still alive. It typically wasn’t done.

The second is related to the potential conflict of interest brought about by the interplay between professional responsibility to act according to the halakhah and the personal desire to have a relationship with a woman being freed from a marriage. In the previous two mishnahs, the Gemara is concerned with an appearance of impropriety — people might talk. In our case, approval to marry is withheld if the man divorces his wife since the possibility exists that he did so in order to marry the other woman. Permission is granted only if he is married at the time he helps her, making it as certain as possible that his motives are pure. No reason for gossip; there’s nothing untoward to see here.

It has long been common for judges to recuse themselves from legal proceedings in which they may be seen to have a personal interest, both to protect the litigants from partiality and the court from the taint of bias. The rulings in today’s mishnah serve to protect the integrity of all parties — the woman, the man who freed her, and the system itself. That’s why a man is allowed to marry a woman he has helped free only if he is already married at the time the marriage is dissolved and he was widowed before marrying her.

Read all of Yevamot 26 on Sefaria.

This piece originally appeared in a My Jewish Learning Daf Yomi email newsletter sent on April 2nd, 2022. If you are interested in receiving the newsletter, sign up here. 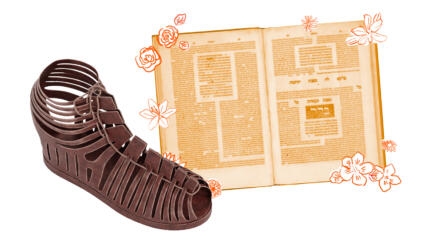 This talmudic text dives deep into the laws of levirate marriage.