Hanukkah almost always falls in the same month as Christmas, sparking a “December Dilemma” for some interfaith families and leading other Jews to worry that the Santa hype is overshadowing their celebration. But this year Hanukkah actually starts at the exact same time as the popular Christian holiday: The first night of Hanukkah, on Dec. 24, coincides with Christmas Eve. And the eight-day holiday then continues through New Year’s. Why is it so late?

The short answer: Because this past year was a leap year, not just in the secular calendar, but in the Jewish calendar as well.

Just as the secular leap year corrects a problem in the Gregorian calendar — that the earth’s revolution around the sun takes 365 1/4 days, not 365 days — the Jewish leap year corrects a problem in Judaism’s mostly lunar calendar. Because the 12-month lunar year is a few days shorter than a solar year, strict adherence to a lunar calendar would mean that the timing of the Jewish holidays would eventually shift and take place in different seasons. This would mean that every now and then we would celebrate Hanukkah, the mid-winter festival of lights, in the middle of summer and Sukkot, the autumn harvest festival, in the early spring.

The Jewish leap year is more complicated than having an extra day in February every four years. Instead, to coordinate the traditional lunar year with the solar year Judaism worked out a system of 19-year cycles, during which there are seven leap years. And instead of adding a day, the Jewish calendar adds a full month — a second Adar — to the year.

In this manner the Jewish holidays fluctuate by about a month or so in relationship to the Gregorian calendar, but always fall during the same general season. In contrast, Islam, which also follows a lunar calendar, made no such corrections. Thus, over the course of time, holidays such as Ramadan, occur at different seasons.

This year, Hanukkah starts at sundown on Dec. 24 and lasts through Jan. 1. To learn more about this holiday, including How to Play Dreidel and How to Light the Menorah, click here.

Why Is Yom Kippur So Late This Year?

In 2016, Yom Kippur doesn't start until mid-October. Here's why.

Why Is Rosh Hashanah So Late This Year?

In 2016, Rosh Hashanah doesn't start until October. Here's why. 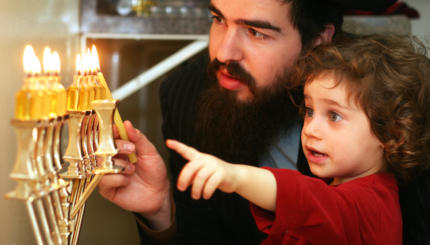 This year, the Festival of Lights concludes a full two weeks before Christmas begins.