The Role Of Ritual

Alright, God, I’ll grant that you may have had something to do with taking my people out of Egypt, but what have you done for me lately? In an age where employees are rarely allowed to have a “bad year” without being terminated, one might wonder why we haven’t “fired” God.

We know that our collective story, the story we’re obliged to teach our children, begins with our liberation from Egypt. We also know that the Holy One’s overt presence has gradually diminished throughout the ages. We also know that that the purpose of many of the commandments we are told to observe is to “remember the Exodus from Egypt.” To name a few: Passover, Sukkot, Kiddush on Friday night, mezuzah, tefillin and the redemption of the first-born male, which is performed a month after the birth of a naturally birthed first-born son.

Nahmanides, the Ramban, comments on why is it important to transmit this memory to our children, as it says at the end of the portion, when your son asks “What’s this?” [Why is this ceremony of the first born happening?] You tell them that with a strong hand, YHWH took us out from the house of bondage” (Exodus 13:14). He also wonders why so many commandments are committed to preserving this memory.

God Will Not Be Present

To paraphrase, he says that the redemption foreshadows that God will not be present later on. God embarks on the scene in this sensational fashion to create a memory of the overt miraculous, so that we may appreciate the covert miracles that happen in everyone’s lives. For if the sea would have split and no people had been there to cross it, it would not have been a miracle, but rather it would have been a fluke of nature. A miracle happens when you need it. Good timing is the stuff of the miraculous.

The proof of God’s overt presence in the past and the observance of commandments that recall the Holy One’s presence, remind us to seek out God’s presence in the ordinary domain of our reality. Nahmanides would argue, unlike his colleague Maimonides, that the fact the sun rises everyday is no less miraculous than the splitting of the Red Sea. The fact that we are here to recall the Exodus is as miraculous as the Exodus itself.

Beyond the pyrotechnics of the Exodus is what the Exodus represented, which was the establishment of a unique relationship between the Holy One and His people. That is the true ongoing miracle. In ancient times we were given a memory to carry with us always. As long as we testify to this memory, we also testify to the fact of a living God in all our lives. A God who is not removed, but who is involved in history.

May we all be blessed with enough insight to witness and acknowledge the miraculous sense of wonder that accompanies our people’s ongoing relationship to the Holy One.

The power of the final plagues. 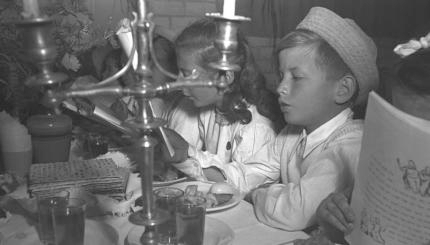 By teaching our children about the Exodus, we gain a greater appreciation and more profound understanding of it ourselves.