The Hebrew word Hanukkah literally means “dedication.” (In modern Hebrew, a hanukkat habayit refers to a ceremony or gathering held to mark the dedication of a new home — or, a housewarming party.)

This definition points to the holiday’s origin as a celebration of the rededication of the ancient temple in Jerusalem. The Maccabees, having waged a three-year battle against the Syrian Greeks, managed to oust them from Jerusalem and reclaim the temple, which the Syrians had defiled. With the temple cleansed, the Maccabees rekindled the temple menorah and again offered sacrifices to God. This rededication became enshrined as the festival of Hanukkah.

Other meanings have been ascribed to the word as well. The first three Hebrew letters spell out the word chanu, which means they rested. The final two letters have the numerical equivalent of 25. This can be understood as referring to the Maccabbees resting from their fight against the Syrian Greeks on the 25th of Kislev, the Hebrew date on which Hanukkah begins.

Hanukkah also shares the same root as the word for education — chinuch in Hebrew. One Hasidic text suggests that the light of Hanukkah is a foretaste of the light of the messiah and is meant to educate us for our eventual redemption. 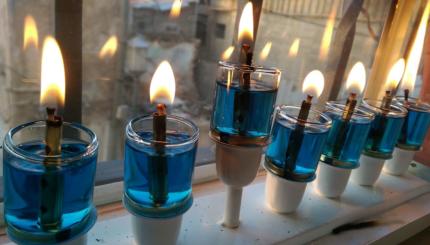 Often spelled Hanukkah, Chanukah is a spelling variant for the 8-day Jewish festival of lights.