Sigd is an Ethiopian Jewish holiday celebrated on the 29th of Cheshvan, exactly 50 days after Yom Kippur.

The name “Sigd” means “prostration” in Ge’ez, an ancient Ethiopian liturgical language, but it is related to the word sged (same meaning) in Aramaic, one of the languages of the Talmud.

Sigd is about accepting the Torah and yearning for Israel and the Temple. It is thought to be the date on which God first revealed himself to Moses.

Traditionally, members of the Beta Israel community fast on Sigd, read from their scriptures (which are called the Octateuch, the five books of Moses plus Joshua, Judges and Ruth), recite psalms, and pray for the rebuilding of the Temple. It is also a time for renewing the Israelite covenant with God. The fast ends mid-day with a feast and dancing. For this reason, though it is connected to Yom Kippur, it shares many resonances with Shavuot.

Since 2008, Sigd has been recognized as a state holiday in Israel. In Israel today, it is celebrated for an entire month leading up to the 29th of Cheshvan, and it is an opportunity to raise Ethiopian Jewish visibility and educate Israeli Jews about Beta Israel customs. 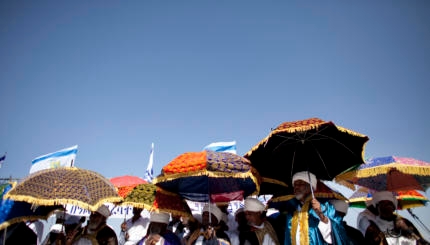