What are sacrifices? “Sacrifice” means giving up something for someone else. In general, there are three kinds of sacrifice:

1. “Sacrifice for yourself.” Think about sports training – you work hard in order to improve your strength and skill. In the Bible, Joseph suggests that the Egyptian Pharaoh make this kind of sacrifice: The king should store food during years of plenty so that there will be enough to eat during years of famine. He gives up enjoying the harvest now so that he and his people will have enough food later. (Genesis, Chapter 41)

2. “Sacrifice for others.” Think about doing chores – you give up your free time in order to help out your family. In the Bible, Yocheved makes this kind of sacrifice: She sends away her baby, Moses, and agrees to have him be raised in the Pharaoh’s palace in order to protect him. She gives up being close to her son in order to keep him safe (Exodus, Chapter 2).

3. “Sacrifice to come close to God.” Think about donating money – you give up buying something for yourself so that other people can have a better life. You may not know the people you’re helping, but you still feel happy anyway; this is because donating money is tzedakah (which means “righteousness”), and it is a holy act. In the Bible, we find this kind of sacrifice in the laws about the priests and their service in the mishkan or Tabernacle. People give up their animals, grain, and money as a way of being holy.

Usually, it’s the third kind of sacrifice that surprises and confuses us the most. So let’s take a closer look.

Korbanot – Sacrifices in the Desert

Throughout the Torah — especially in Exodus, Leviticus, and Numbers — we read many, many passages about sacrifices. Here’s a quick summary:

• A group of people called the kohanim (“priests”) were the only ones who were allowed to make sacrifices to bring people close to God. The first kohen was Aaron, and his sons became kohanim after him.

• The kohanim would make sacrifices for themselves, for other individual Jews, or for the entire Jewish people.

• These sacrifices were called korbanot. The word korban means “something which draws close.” Their purpose was to bring people closer to God.

• There were three basic kinds of korbanot: Animals, grain, and money. Animals would be killed, grain would be burned, and money would be donated. Sometimes, when a person didn’t have any animals to sacrifice, they would offer grain or money instead (see for example Leviticus 5:11, 5:18, and 14:21).

The kohanim were called “those who come close to the Eternal” (Exodus 19:22), showing that their job of offering korbanot involves closing the distance between human beings and God. Indeed, God tells Moses to build the sanctuary where the korbanot are offered so that God can “dwell among” the people of Israel (Exodus 25:8). So, offering korbanot was one way of bringing God and the Israelites closer together.

We often have questions about why animals were chosen to be killed so that human beings could get closer to God. Isn’t that cruel? Maybe yes and maybe no. We can look at it both ways.

On the one hand, killing animals is wrong. The story of Creation teaches us that human beings are meant to protect life on earth, not destroy it (Genesis 2:15). So even though the ancient sacrifices had a holy purpose, they were unnecessarily violent. Today, we know that there are many other ways we can draw close to God that don’t involve killing animals. In particular, Judaism teaches that prayer is a replacement for animal sacrifices.

On the other hand, killing animals is not wrong, especially when human beings then eat the animals. The story of Noah’s Ark teaches us that God understands people’s desire to eat meat (Genesis 9:3). Humans have eaten animals for thousands of years and still do today. This is related to korbanot because every animal that was sacrificed was later eaten. In fact, the only time the Israelites ate meat in the desert was after a sacrifice (see Deuteronomy 12:20 and Rashi’s comment). So, sacrificing animals in the ancient world was similar to killing animals today for food.

To summarize, the priests killed animals for some korbanot. Today, we can understand this practice as both “wrong” and “not wrong.”

What Does It All Mean?

Korbanot were used to draw people closer to God. Israelites brought offerings of animals, grain, or money to the kohanim, and the kohanim in turn offered them as sacrifices to God. This was the main process used to connect ancient Jews with God. People gave up their prized possessions as a symbol of their dedication to God, and this became the most important part of Jewish worship.

After the destruction of the Temple in the year 70 CE, Jews stopped offering korbanot. Instead, they began to offer prayers. The rabbis taught us that we can become closer to God with the words of our mouths rather than with physical sacrifices. Nevertheless, they still based the Jewish evening, morning, and afternoon prayer services on the ancient rituals for offering korbanot.

Today, when we come together as a community to pray, we use the model of the korbanot to guide our prayer. The korbanot teach us that we have to give something of ourselves in order to draw nearer to God. They teach us that it can be easier to come close to God with the help of other people rather than all by ourselves. And they teach us that prayer can be deeper when we use ancient rituals. In all these ways, the korbanot still lead us to holiness today.

1. What kinds of sacrifices are present in this Torah portion? (Sacrifice for yourself, for others, or to come closer to God?)

3. Sacrifices in the Torah required very specific rituals. What are some rituals that are important to me that help me to feel Jewish or holy?

4. What are some ways I can draw close to God?

5. What might I want to teach my friends and family about sacrifice from a Jewish perspective? 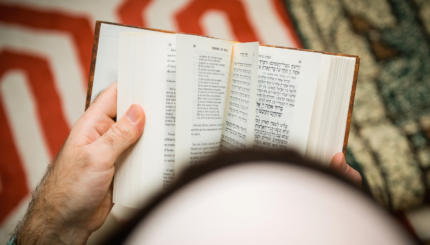 Why You Should Stop Skipping Korbanot

This often ignored section of the morning prayers aims to remind us that there is holy work to be done -- and we are the only ones who can do it.