Despite Rabbi Jacobs’ arguments in the last paragraph, a number of prominent rabbinic figures of the recent past have been vegetarians, including Rabbi Avraham Yitzhak Hacohen Kook (“Rav Kook,” 1865-1935), the first Ashkenazi chief rabbi of Eretz Yisrael.

Vegetarians often quote two biblical passages in support of their view that it is morally wrong for human beings to kill animals for food. In the creation narrative (Genesis 2:29-30) both man and animals were given the herbs of the field for their food and they were not permitted to prey on one another. In Isaiah’s vision (Isaiah 11:7), “the lion shall eat straw like an ox.”

The first passage, however, only expresses the ideal that obtained at the beginning of creation and the second an ideal for ‘the end of days,’ later understood as referring to the Messianic age. It is nowhere stated in the Bible that in the here and now vegetarianism is an ideal. On the contrary, when Noah and his sons emerge from the ark, the animals are given to them as food. In any event, in Judaism attitudes are not formed simply on the basis of biblical verses culled from here and there but on the way the teachers of Judaism have interpreted the religion throughout the ages.

To be sure, Judaism is firmly opposed to cruelty to animals, but it does allow man to use animals for his needs—to work for him and provide him with wool, skins, and milk, for instance—and even permits him to kill them for food, though insisting that the pain caused to animals in the process be reduced to a minimum. The Talmud (Pesahim 109a) states that meat and wine are the means by which man ‘rejoices’ and it is on this basis that it has long been customary for Jews to eat meat and drink wine on the festivals. In the Kabbalah, the further idea is introduced that when man eats the meat of animals and then worships his Maker with renewed strength he ‘elevates’ the animal by using the strength it has given him in the service of God. This is the Kabbalistic explanation of why the Talmud (Pesahim 49b) states that an am ha-aretz, the man who does not study Torah, may not eat meat.

There is, of course, no actual obligation for a man to eat meat and there are even a number of Jewish vegetarian societies. But it can be argued that for a Jew to adopt vegetarianism on the grounds that it is wrong to kill animals for food is to introduce a moral and theological idea that implies that Judaism has, in fact, been wrong all the time in not advocating vegetarianism.

For this reason many traditional Jews look askance at the advocacy of vegetarianism as a way of life superior to the traditional Jewish way. Some pious Jews in the past did not eat meat, but this was either as a penance or in order to control the appetites, not as an idealistic stance in which the killing of animals for food is in itself morally wrong. A further point worthy of mention is that the suggestion made by some vegetarians that it is wrong to use animals because they have equal rights to humans is risky, in that it tends to obliterate the distinctions between animals and human beings created in the image of God.

Rav Kook Was Not a Vegetarian!

Among the many false claims about Rabbi Avraham Yitzkak HaCohen Kook is the assertion that he practiced vegetarianism. 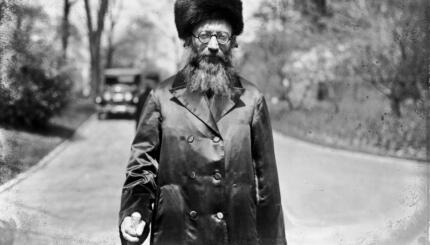 This major 20th-century Jewish thinker saw vegetarianism as the biblical ideal to which humankind should work to return.