The Torah prescribes death as punishment for a number of serious sins — among them murder, idol worship and desecrating the Sabbath — as well as several seemingly less serious ones, like serially disobeying one’s parents. In practice, however, death sentences were rarely carried out by Jewish courts.

A famous Mishnah passage states that a religious court that executed someone once in 70 years was considered destructive. That gap between principle and practice is often cited as evidence that Judaism is deeply uncomfortable with capital punishment, so much so that the rabbis of the Talmud erected significant legal bulwarks to make it exceedingly rare. Others argue that the Torah’s explicit judgment that certain crimes merit a sentence of death is irrefutable proof that capital punishment is consistent with Jewish tradition.

The Death Penalty in the Torah

The Torah imposes a penalty of death for a range of misdeeds. These include ritual infractions, such as violating the Sabbath, worshiping idols and cursing God; sexual sins, including incest, adultery, anal sex between men and bestiality; and various criminal acts, including murder, kidnapping and giving false testimony in a capital case. In one particularly challenging biblical passage (Deuteronomy 18-21), the Torah imposes a penalty of death by stoning in the case of a “wayward son” who does not heed his parents’ discipline. (The Talmud states that there never actually was a wayward son nor will there ever be one and that the Torah mentions it merely so it should be studied.)   Stoning is the most common method of execution described in the Torah, prescribed not only in the case of the rebellious child, but also for murder, blasphemy, breaking the Sabbath and idolatry. The Torah specifies that a person may be put to death only on the testimony of two witnesses — never by one alone — and that the witnesses who testified must be the first to lay their hands on the accused to kill him. Death by fire is mandated for a number of sexual sins, mainly various forms of incest.

The Death Penalty in the Talmud

The rabbis of the Talmud discussed the legal requirements of capital punishment at great length, establishing significant barriers that made such a sentence extremely difficult to carry out. According to the Mishnah, capital cases had to be decided by a Sanhedrin of 23 judges. If the conviction in a capital case was unanimous but rendered too quickly the accused was acquitted on the assumption that the judges had not adequately considered the possibility of the defendant’s innocence. Perhaps most onerous of all, the offense had to be witnessed by two people who warned the perpetrator immediately prior to committing the act that it was a capital offense.   Such stringencies are often understood to account for the famous Mishnah passage that states that if a Sanhedrin executed one person in seven years, it was considered destructive. Rabbi Elazar Ben Azariah objects that the standard is actually once in 70 years, and Rabbis Tarfon and Akiva say that had they served on the court, no one would have ever been executed.

However, some scholars, such as Rabbi Louis Jacobs in The Jewish Religion: A Companion, have noted that the power of Jewish courts to impose a death sentence was ended by the Romans sometime in the first century of the Common Era, and as a result the Talmudic discussions of the matter, including their imposition of stringent rules of evidence in capital cases, should be understood as purely theoretical — not as practical guidance for how such cases should actually be adjudicated. Jacobs also pointed to passages in the Talmud and elsewhere that permit extrajudicial execution in certain circumstances as evidence that Jewish law is not as uncomfortable with the death penalty as is sometimes said to be the case.

Maimonides writes in the Mishneh Torah that in a case where someone commits murder but cannot be convicted on account of some technicality, the killer is to be fed bread and water until he aches and then fed barley until his stomach ruptures. A similar punishment is prescribed by the Talmud for repeat offenders. Elsewhere, Maimonides writes that a king may execute a killer even without clear proof or a warning for the sake of public order, and may even leave their bodies hanging for days to instill fear in the hearts of the wicked. The Talmud endorses a similar position, saying that in certain extreme circumstances courts may impose a death penalty even if the standard legal requirements are not met. The Shulchan Aruch later codified that ruling, saying that punishments of death could be imposed without clear testimony at times of rampant sinfulness.

Furthering this line of thought is the fact that the Talmud discusses in detail the various types of executions, which some take as evidence that the mechanics of carrying out a death sentence were of more than theoretical concern. Four methods of execution are discussed in the Talmud: stoning, burning, beheading and strangulation.

The Death Penalty in Israel

The death penalty has been carried out only twice in Israel’s history. The most famous instance was the case of Adolf Eichmann, the senior SS officer and leading architect of the Holocaust who was executed by hanging in 1962 after a trial that captivated the world. The other case was shortly after Israel’s establishment in 1948, when an army officer, Meir Tobianski, was executed for treason after a court martial in which he had no legal representation. Tobianski was posthumously exonerated and reburied in a military ceremony with full honors. Several other death sentences have been handed down over the years but none carried out.

Current Israeli law allows for the death penalty only in limited circumstances. These include crimes related to the Holocaust and treason committed by a soldier during wartime. The Israeli Knesset voted in 1954 to abolish the death penalty for murder.  Technically, Palestinian terrorism is liable for capital punishment under Israeli law, but Israel has never executed a Palestinian terrorist convicted at trial. (Israel’s military, like the U.S. military and others, has carried out targeted assassinations of terrorist suspects, a policy validated by Israel’s Supreme Court in 2006.) In recent years, right-wing lawmakers have been pushing for this to change. In 2015, the Knesset overwhelmingly voted down a bill introduced by the right-wing Israel Beiteinu party that would have made it easier for judges to impose a death sentence on terrorists. In 2017, Prime Minister Benjamin Netanyahu called for the death penalty in “severe cases,” a call he issued after visiting the family of three Israelis stabbed to death by a Palestinian in their home in the West Bank settlement of Halamish.

Democrats are also less likely than Republicans to support the death penalty according to Gallup, and the 2016 Democratic party platform called for its abolition while the Republican platform called the constitutionality of capital punishment “firmly settled.” American Jews favor the Democratic party by large margins.   According to pollsters, overall American support for the death penalty for convicted murderers has been steadily declining for decades, with the Pew Research Center reporting in 2016 that support for capital punishment had fallen to a 40-year low at 49 percent.

Among both the secular and religious leadership of American Jewry, there is widespread opposition to capital punishment. The Reform and Conservative movements have long been in favor of abolishing capital punishment, while the Orthodox Union, in 2004, expressed support for a moratorium “pending the implementation of appropriate reforms”  — among them, steps to address issues of fairness in the judicial system, in particular allegations of racial bias in administering the death penalty. The American Jewish Committee and the Jewish Council for Public Affairs have been longstanding opponents of the death penalty. 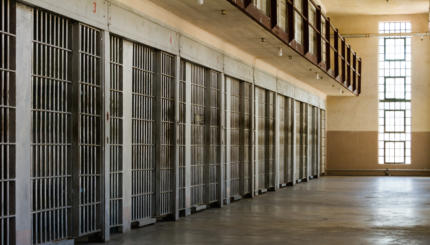 The Jewish case for capital punishment.

The Jewish case against capital punishment.