What Do the Letters On the Dreidel Stand For?

YouTube holds a vast library of music, and Hanukkah songs are no exception. The Hanukkah terrain consists of the classics, creative recreations of popular songs and lots and lots of acapella. Here’s a wide mix of all different types of Hanukkah songs to get you in the mood for a bright and joyful holiday! Listen to the full playlist here.

Literally “for the miracles”, Al HaNisim is a classic Hanukkah song that relates briefly the story of Hanukkah and Purim. It is a song of thanksgiving to God for redeeming the Jews from oppression. This old school classical Israeli rendition of the Al HaNisim by Izhar Cohen (1974) has a pep in its step.

Literally meaning, “these candles”, Haneirot Halalu is traditionally sung right after lighting the Hanukkah candles. The song is about the holiness of the candles and how their purpose is to commemorate the events of Hanukkah. This version is a stunning ensemble sung by Margie Rosenthal and Ilene Safyan, two prolific Jewish singers. Their voices weave together beautifully and bring about feelings of Jewish pride and wistfulness.

Literally meaning “the Rock of Ages,” Maoz Tzur is sung typically right after Haneirot Hallalu and it is all about how the historical challenges Jews faced were overcome with God’s help. For this one, there are lots of wonderful versions, including: a cantorial version by Cindy Paley, a folk version by Melita and Isaac, and a child-friendly version by Shira Kline.

This rendition is by Theodore Bikel. Hanukkah Oh Hanukkah is another classic song that celebrates the Festival of  Lights and can be found in a variety of languages, like Yiddish and English! It is a song that encapsulates all that Hanukkah is about — fun treats, family and admiring the luminance of the candles. Check out the full lyrics here.

Another classic, Mi Yimalel literally translates as “Who can retell?” It’s a song about how Jews have overcome obstacles throughout history and how Jews were redeemed in the story of Hanukkah. This version is by the Weavers, an American folk quartet that sang folk songs from around the world. Check out the full lyrics here.

“Candlelight” By the Maccabeats

Here comes Jewish a capella! This parody of Taio Cruz’s song “Dynamite” went viral in 2010 with over 15 million views. This all-time favorite hit is sung by the Maccabeats, an Orthodox Jewish a capella group that specializes in creating Jewish hits out of contemporary songs. Our latest recommendation? Their dub of Billie Eilish’s “bad guy”, called “Pan Fry.” These puns are everything!

I Have A Little Dreidel

Playing with spinning tops called dreidels is a significant part of the Hanukkah fanfare. This classic sweet song is all about a dreidel made of clay and a favorite for many Jewish children. Want to learn how to play the dreidel game? Rule refresher here.

I Have A Little Dreidel – Evolution of Music Version

This mashup version of “I Have a Little Dreidel” by the Maccabeats is a true masterpiece. The song is a journey through different musical genres from the bluegrass, to the 80’s, to reggaeton, and more. Not to mention the amazing music video complete with costumes and upbeat dancing. This one’s a winner!

Love Taylor Swift? This one’s for you. Thought we were done with a cappella? Not so fast. Jews do it too damn well. Six13 is an all-male Jewish a capella group and this cover of Taylor Swift’s “Shake It Off” has a guaranteed feel-good effect and it’s lyrics are educational too. What more could you ask for?

In 1994, Adam Sandler sang this funny song on Saturday Night Live. He recalled feeling lonely as the only Jew in his class during Christmas season and wrote this ditty about famous people you might not have known were Jewish meant to touch other kids who felt similarly. Filled with funny Jewish jokes, this one is sure to bring you a laugh.

Deep in the Youtube abyss, one can find some very strange and interesting things. Here’s a Hanukkah version of Outkast’s Hey Ya. Its a little random, a little sassy, and a whole lot of fun.

This is an acoustic version of  Matisyahu’s classic Hanukkah song, “Happy Hanukkah.” Matisyahu  is a famous American Jewish reggae singer, rapper, beatboxer and alternative rock musician. The music video is set in the mountains and the unfiltered quality to it is quite soul-filling.  Here’s the original.

Light One Candle, by the folk group Peter, Paul and Mary, addresses the difficult fight won by the Maccabees and also challenges facing Jews throughout history. Decades after it was first introduced in 1982 it’s still a holiday favorite.

Jews have long beautified their traditions through song and listening to these pieces really invokes the excitement and pride that comes with the celebration of Hanukkah. Listen to all these songs on our Youtube playlist here. 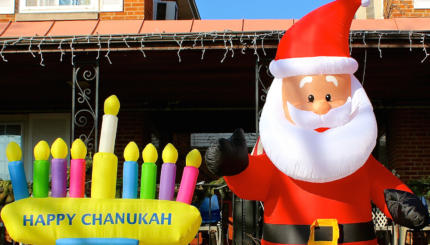 From 'White Christmas' to 'Winter Wonderland,' some of the most famous songs of the season are by members of the Tribe.

The Best of Woody Allen