A prayer that relates briefly to the story of Hanukkah and Purim, [Al Hanisim is] inserted into the 18th benediction of the Amidah (“Modim“) and into the second benediction of Birkat Hamazon [the grace after meals](“Nodeh L’kha“).

The introductory sentence reads as follows: Al Hanisim —“We thank Thee for the miracles, the redemption, and the triumphant victories, and liberation which Thou hast wrought for our fathers in days of old at this season.” Following that is a description of the basic events of Hanukkah (“Bimay Mattityahu–in the days of Mattathias] and Purim (“Bimay Mordehcai–in the days of Mordecai”].

Al Hanisim in Hebrew and Translation (via Sefaria)

We thank thee also for the miracles, for the redemption, for the mighty deeds and saving acts, wrought by thee, as well as for the wars which thou didst wage for our fathers in days of old, at this season.

The Connection to Giving Thanks

Since Al Hanisim serves as an expression of thanksgiving, it is most fitting that it is placed into the benediction called Hoda’ah (“Thanksgiving”). A short version of Al Hanisim is found in Soferim 20:8, and the current text is taken from the siddur [prayer book] of Rav Amram Gaon (Seder Hanukkah) and Siddur R. Sa’adyah Gaon (256). Reciting Al Hanisimis also mentioned in She’iltot (Va- yishlah) of Gaon Aha. Variation in text exists between the Ashkenazi and Sephardic rites.

Some authorities add the conjunction vav before the word Al, thus Ve’al (“And for. . .”). Owing to the fact that the festivals of Hanukkah and Purimare post-biblical and were established by rabbinic ordinances, Al Hanisim does not have to be repeated if one inadvertently omitted it in the Amidah or in Birkat Hamazon.

Customarily, Al Hanisim is not announced at Teffilat Arvit [the evening prayer service], because prior to Teffilat Arvitthe candles are lit in the synagogue and the worshipers are apprised of the additional recital. The [religious authority known as] Abudraham, however, suggests that Al Hanisim be announced by the SHaTZ [prayer leader] on Purim.

Excerpted with permission from The Encyclopedia of Jewish Prayer (Jason Aronson).

The Modim prayer, part of the Amidah, in Hebrew, English and transliteration. 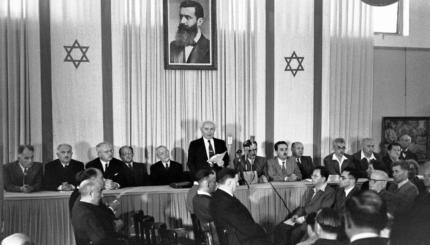 Praying For the Miracle of Israel

Multiple version of the Al Hanisim prayer have been composed to thank God for Israel, each emphasizing different aspects of the Jewish state's creation.