The Tanach is the quarry from which the siddur [prayerbook] was constructed. Long passages and individual phrases were lifted to create the verbal prayer that became the hallmark of the synagogue. Best known are the three paragraphs of the Shema taken from the books of Deuteronomy and Numbers and the many psalms from the Psalter. This week’s Torah portion contributed only a single word to this edifice, but one of unique centrality and resonance.

Abraham in the Amidah

After Abraham’s crushing victory over the four foreign kings, who had taken his nephew Lot as captive, God assures him of continued divine favor: “Fear not, Abram, I am a shield to you; your reward shall be great” (Genesis 15:1). The Rabbis recast that word “shield” into the phrase “Shield of Abraham,” referring to God, in order to make it the conclusion of the first blessing of every Amidah [the central prayer said standing during every service]: “Praised are you Lord, Shield of Abraham” (Magen Avraham). By extension, God’s promise of protection for Abraham holds good for his progeny. What greater shield might we have than God’s steadfast concern?

But it is a promise often trampled by the course of events. How do we bridge the recurring divergence between our history and our theology? Reality seems to mock our pious constructs. The same blessing of the Amidah has another biblical phrase on which the Talmud offers one of the most remarkable rabbinic homilies on the subject of theodicy that I know. In relating to God prior to our petitions, we praise God in the words of Moses as “the great, the mighty and the awesome God” (Deuteronomy 10:17). The adjectives magnify the image of the shield. Its bearer is nothing less than invincible and omnipotent, making our squaring of the circle still more difficult.

Calamity is Nothing New

The 20th century is not the first in which calamity has devastated Jewish life. The Rabbis imagined the prophet Jeremiah, who foretold and endured the destruction of the First Temple, as emending the text of the Amidah: “Gentiles are dancing in the Holy of Holies, where is God’s awesomeness? Thus Jeremiah refused to pronounce the word ‘awesome.'”

Similarly, the prophet Daniel later witnessed the subjugation of Israel in exile and exclaimed, “Where is God’s might? and refused to pronounce the word ‘mighty.'”

However, the emended blessing did not long remain in its truncated form. The Men of the Great Assembly “restored the crown to its original luster.” In contrast to Daniel, they argued that God’s might is manifest by extraordinary patience with the wicked. Instead of punishing them, God subdues God’s own anger and acts with constraint. Likewise, God’s awesomeness is evident in the survival of the Jewish people in exile. Fear of God is what stays the hand of the nations of the world from annihilating us. In short, with a bit of exertion, the attributes of God can be reconciled with the historical experience of ancient Israel.

What gives this discourse its special punch is the unexpected turn it takes at this point: The Talmud goes back to Jeremiah and Daniel. What promoted them to set aside the words of Moses? This was no small step in a culture that regarded the Torah as immutable. The answer offered is “that they knew that God valued truth and hence would not flatter God falsely” (Babylonian Talmud, Yoma 69b).

The ending upends the previous resolution. The sympathy of the Talmud (i.e., the editor of this passage) lies with Jeremiah and Daniel. The priority of truth spares them the need to deny what they lived through. Their integrity is respected. We are not asked to paper over the brutal reality of our historical experience with theological platitudes. As the Talmud claims elsewhere, “The seal of God is truth” (Babylonian Talmud, Shabbat 55a).

How then can we be left with two conflicting responses to the same conundrum? In fact, they are less in conflict than appears on the surface. The Men of the Great Assembly also were ready to accept a self-limiting God who does not intervene in every crisis to rescue God’s chosen people. Isn’t that the point of God’s being slow to anger with those who afflict Israel?

Only long-term do we begin to detect God’s hidden hand in our survival. Up close, the horror of the moment obscures God’s presence. But from a distance, Jewish durability against all odds defies the accumulation of proximate historical causes. The tools of the historian are better suited to account for the nature and direction of confined events. Confronted by the vast expanse of Jewish history, we sense a mystery that makes God’s presence manifest. Though unstated, that is surely also the long-term belief of Jeremiah and Daniel.

In the final analysis, the difference between the two positions, that of Jeremiah and Daniel on the one hand and that of the Men of the Great Assembly on the other, comes down to the difference between the literalist and the non-literalist. The prophets, with a constricted view of language, removed the words that ran counter to what they witnessed. The Men of the Great Assembly, being non-literalists, retained the words but reinterpreted them.

I would dare say that neither violated what they perceived to be true. The advantage of the non-literalist approach is that the text of our prayers need not be revised in every generation. The inherent pliability of language allows for continuity in form. What changes is the content or meaning we ascribe to the words. In either case, the operative principle is to pray with integrity. Or as we remind ourselves each morning before we start praying, “We should always revere God in private as in public, acknowledging the truth and speaking the truth in our hearts.”

Jeremiah's deep faith despite the impending exile predicted in Parashat B'hukotai can teach us to turn to God in the most troubling of times. 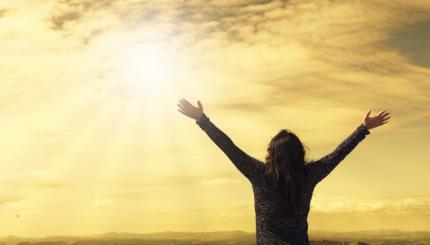 Prayer: Service Of The Heart

Abraham's servant teaches us the power of spontaneous prayer, a concept that challenges our contemporary focus on consistency and conformity.

By viewing the troubles and joys of our lives as part of a continuum we can uncover blessings even in the most challenging curses.