This article is excerpted from The JPS Bible Commentary: Haftarot.  It is reprinted with permission from the Jewish Publication Society.

The selection of Jeremiah 31:2-20 as the haftarah for the second day of Rosh Hashanah is already mentioned in the Babylonian Talmud (B. Megillah 3Ia), and in his commentary Rashi provided a thematic explanation for this tradition-suggesting that the prophetic unit from Jeremiah was chosen "because of [the phrase in v. 20] ‘My thoughts would dwell on him’ [zakhor ‘ezkerenu], [and also] ‘I will receive him back in love [rakhem ‘arakhamenu]?" It would appear that by stressing the theme of remembrance (zikaron) and mercy (rakhamim) in the haftarah, Rashi wishes to allude to the designation of Rosh Hashanah as a day zikhron teruah (commemorated with loud blasts [Leviticus 23:24]), when God would judge all creatures (M. Rosh Hashanah 1:2).

Medieval sources preserve a custom of reciting three triads of citations (from the Torah, Writings, and Prophets-in this sequence) for each of the three groups; namely, the Malkhuyot, the Zikhronot, and the Shofarot. A climactic tenth verse for each group is taken from the Torah and incorporated into a final petition. While the verses and their order vary, it is notable that Jeremiah 31:20 is commonly adduced in these lists-and in the traditional Ashkenazi machzor (holiday prayer book), it occurs as the ninth biblical citation in the Zikhronot cycle. This position is rooted in an old tradition and can be traced back to the siddur of Rabbi Saadiah Gaon (ninth century) and even to a Rosh Hashanah piyyut composed by Yose ben Yose (fifth-sixth century, Israel). As the context of Yose’s prayer makes clear, Jeremiah 31:20 was the last of nine biblical citations invoked to plead with God to remember His saints and people for good during the period of divine judgment on Rosh Hashanah. 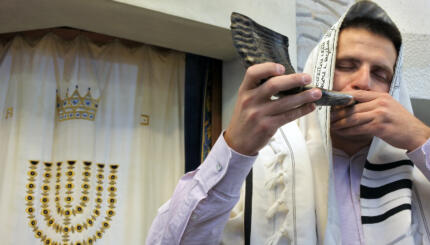 Rosh Hashanah and Yom Kippur services feature many additions that can make the services difficult to follow. Here’s a guide.