Believing in the Story’s End

The Haggadah instructs that each of us (“In every generation . . .”) is actually supposed to feel as though we had been slaves and made the transition to a new status. How can we do this–take ancient history and make it into my story and your story?

We who live in an open, democratic society tend to think of ourselves as free. But are we really, just because we are not physically bound to an overlord? What do being enslaved and unencumbered by oppression really mean? And are they mutually exclusive?

In Hebrew, Egypt is called Mitzrayim. According to the text on Jewish mysticism, the Zohar, the name is derived from m’tzarim, meaning “narrow straits” (mi, “from,” tzar, “narrow” or “tight”). When God took us out of Mitzrayim, He extricated us from the place of constricted opportunities, tight control, and narrow-mindedness, where movement was severely limited.

Each of us lives in his or her own mitzrayim, the external or physical narrow straits of financial or health constraints or, perhaps, personal tragedy; universally, the psychological burdens to which we subject ourselves. Like the duality in virtually all of Passover’s symbols, they work in two ways: they turn us into both slaves and oppressors, of ourselves and others. Passover leads us to question the values and attitudes we hold and which hold us to those roles.

Do we pursue, even worship, things like money and status for their own sake, rather than for how they can make our lives and the lives of those around us better? Do our own insecurities or overconfidence inhibit us from fully participating in life rather than getting the most out of relationships? Do our stereotyping, prejudice, or exploitation oppress other people by robbing them of their dignity rather than affording them the same opportunities we want for ourselves?

As we get rid of leaven and replace it with matzah, we are supposed to confront whatever it is that we normally allow to persist in our lives but which should perhaps, like the leaven, be eliminated, and that which we suppress which should, like the back-to-basics unleavened bread, be admitted. (Do you work to live or live to work? Do you play for enjoyment or to avoid having to think? Are you unhappy in a situation but so entrenched in it that you have come to accept it as the norm–as acceptable? Does an addiction to food, alcohol, drugs, a pattern of behavior, or another person interfere with leading the life you really want for yourself? Do you allow others to take advantage of your time and resources?

Pharaoh is seen as the evil enslaver of others. But he was bound by his own ego, which led him to ruin everything he valued, including himself. Even his officials recognized the catastrophe his attitude brought. “Let the men go,” they advised. “Don’t you realize that Egypt is being destroyed?” (Exodus 10:7). His arrogance simply got in the way.

In order to take the necessary action, we need to believe that things must change for our own good. When we do, we, like Pharaoh, make vows to change. But often, once an immediate need has passed, we, like Pharaoh, who gave and then retracted his permission for the Israelites to leave, revert to old habits. It may be easy, but in the long run, we only hurt ourselves. (Remember the ancient Israelites who, not a week out of Egypt, were ready to forego liberty and return to their miserable lives, yearning for the comfort of the familiar evil over fear of the unknown.)

Slavery does offer a certain freedom that can be attractive: the freedom from responsibility for yourself and others, the freedom from having to establish goals, figure out how to reach them, or think beyond the moment. It takes strength and guts to walk out of a known situation, which for all its pain, is predictable. It is human nature to want to stay put within the stability of the status quo. The danger is that often in those situations you don’t even know that you are mired in a negative situation, one you don’t realize until too late.

You tell yourself you will look for a better job, sign up for community service, be much nicer to your kids, get out of an abusive relationship, go back to school, pay off your contributions… tomorrow. Jacob did not intend to stay in Egypt more than a short time–and look what his sojourning cost. At Passover, we should at least recognize inertia for what it is and not kid ourselves into complacency about our own situation or that of others.

Passover, with its message of hope, tells us that like the Egyptian slaves, we can escape from our straits. Once they had tasted freedom with the paschal lamb, the Israelites gave up the comfort of the familiar, without concern for provisions or how they would get to or exist at their destination. They left Egypt because they believed a better life awaited them elsewhere. As Rabbi Nachman of Breslov (an 18th-century Hasidic leader) counseled, when you are about to leave “mitzrayim” you should not worry about how you will manage in a new “place.” Anyone who does or who stops to get everything in order for the journey will never pick himself or herself up. 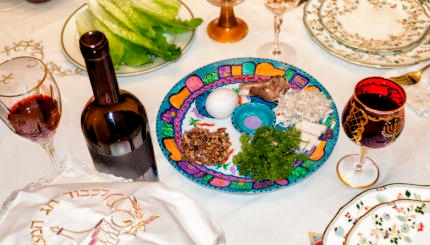