In 1946, President Harry S. Truman learned from investigators that conditions for Jewish displaced persons in the American Occupied Zone were appalling. One historian observed that the camps “differed from the Nazi camps only in that the inmates were not deliberately exterminated.”

Truman pressed the British to accept 100,000 Jewish DP’s into Palestine. The British responded by proposing to create a Joint Committee of Inquiry to visit the Displaced Persons (DP) camps in Germany and then travel to North Africa and Palestine to assess the feasibility of resettling the DP’s there.

READ: One Ruth Gruber Says Goodbye to Another

Having finished her own resettlement work with Jewish refugees at Fort Ontario, New York, Ruth Gruber packed up her camera, notebooks, and a typewriter and followed the Joint Committee as a correspondent for the New York Post. When the Committee arrived in the DP camps, Gruber reported in her dispatches that the survivors greeted its members with signs saying, “We want to go. We must go. We will go to Palestine.” When asked why he wanted to go to Palestine, a 16-year old orphan who had survived Bergen-Belsen replied, “Why? Everybody has a home. The British. The Americans. The French. The Russians. Only we Jews have no home. Don’t ask us. Ask the world.”

The Committee members spent four months in Europe, Palestine, a few Arab countries, and another month in Switzerland digesting their experiences. At the end of deliberations, its twelve members–six Britons and six Americans–unanimously agreed that Britain should allow 100,000 Jewish immigrants to settle in Palestine. However, the celebrations that followed in the camps were quickly stilled when British Foreign Minister Ernest Bevin rejected this finding.

Eventually, the United Nations took up the issue. The UN appointed a Special Committee on Palestine (UNSCOP). Like its predecessor, UNSCOP visited the camps in Germany and then traveled to the Arab states and Palestine. Gruber accompanied UNSCOP as a correspondent for the New York Herald. While in Jerusalem, she learned that a former American pleasure boat, renamed the Exodus 1947, had attempted to deliver 4,500 Jewish refugees–including 600 children, mostly orphans–but was attacked by five British destroyers and a cruiser. Gruber left immediately for Haifa and witnessed the Exodus entering the harbor, looking, as Gruber wrote, “like a matchbox splintered by a nutcracker.”

During the “battle,” the British rammed the Exodus and stormed it with guns, tear gas, and truncheons. Gruber noted that the crew, mostly Jews from America and Palestine, fought back with potatoes, sticks, and cans of kosher meat. The Exodus‘s second officer, Bill Bernstein of San Francisco, was clubbed to death trying to prevent a British soldier from entering the wheelhouse. Two orphans were killed, one shot in the face point blank after he tossed an orange at a soldier.

When she learned that the prisoners from the Exodus were being transferred to Cyprus, she flew there overnight. While she waited for the Exodus detainees, she photographed earlier Jewish prisoners living behind barbed wire in steaming hot tents with almost no water or sanitary facilities. “You had to smell Cyprus to believe it,” she cabled the Herald.

The British changed plans and sent the Exodus prisoners to Port de Bouc in southern France, where they had first embarked. Gruber rushed there from Cyprus. When the prison ships arrived, the prisoners refused to disembark. After 18 days in which the refugees endured the blistering heat, the British decided to ship the Jews back to Germany. World press reaction reflected outrage. While hundreds of journalists descended on Port de Bouc, only Gruber was allowed by the British to accompany the DP’s back to Germany.

Aboard the prison ship Runnymeade Park, Gruber photographed the refugees defiantly raising a Union Jack on which they had painted a swastika. Her photo became Life Magazine’s “Picture of the Week.” Crushed together on the sweltering ship, making their way back to Germany, the refugees sang Hatikvah, the Hebrew song of hope. Gruber’s book about the DP’s endurance would later provide Leon Uris with material for his book and screenplay, Exodus, which helped turn American public opinion in favor of Israel.

In 1951, Gruber married, gave birth to two children and suspended her journalistic travels. She wrote for Hadassah Magazine and raised funds for UJA. In the 1970s, she traveled to Israel, where she wrote a biography, Raquela, which won a National Jewish Book Award. In 1985, at age seventy-four, Gruber traveled to Ethiopia, where she observed the aliyah of the nation’s Jews to Israel.

Gruber’s travels to Ethiopia completed a cycle that started with her trip to Italy in 1944 to bring 1,000 Jewish refugees to Fort Ontario.

For more about Ruth Gruber’s life, read her memoir Witness: One of the Great Correspondents of the 20th Century Tells Her Story. Other books include Exodus 1947: The Ship that Launched a Nation and Haven: The Dramatic Story of 1,000 World War II Refugees and How They Came to America. 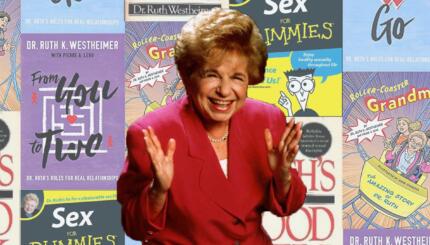 How a Jewish grandmother forever changed America's ideas of sexual education and literacy.