The haftarah for the first day of Rosh Hashanah tells the story of Hannah, a childless woman who turns to God in desperate and intense personal prayer. Since Hannah’s story highlights the power of prayer, it is an appropriate selection for a day when Jews traditionally spend a good portion of their time in prayer at synagogue.

The Torah reading for this day of Rosh Hashanah opens with the words, “And the Lord took note of Sarah” (Genesis 21:10), and describes the birth of Isaac–signifying the end of Sarah’s long period of barrenness. Similarly, in the haftarah, God brings an end to Hannah’s barrenness. According to the Talmud (Rosh Hashanah 11a), Rosh Hashanah is the day of remembrance, and the most classic example of God “remembering” humanity occurs when a woman’s infertility ends.

The Rosh Hashanah liturgy declares: Hayom harat olam–today is the day of the world’s creation. Each time a child is born, the miracle of creation is repeated.

This English translation is reprinted with permission from Tanakh: The Holy Scriptures published by the Jewish Publication Society. In the Reform tradition, this haftarah is read through verse 1:28.

1:1.             There was a man from Ramathaim of the Zuphites, in the hill country of Ephraim, whose name was Elkanah son of Jeroham son of Elihu son of Tohu son of Zuph, an Ephraimite.

1:3.             This man used to go up from his town every year to worship and to offer sacrifice to the LORD of Hosts at Shiloh. Hophni and Phinehas, the two sons of Eli, were priests of the LORD there.

1:4.             One such day, Elkanah offered a sacrifice. He used to give portions to his wife Peninnah and to all her sons and daughters;

1:16.         Do not take your maidservant for a worthless woman; 1 have only been speaking all this time out of my great anguish and distress."

Hannah conceived, and at the turn of the year bore a son. She named him Samuel, meaning, "I asked the LORD for him."

1:21           And when the man Elkanah and all his household were going up to offer to the LORD the annual sacrifice and his votive sacrifice,

1:23           Her husband Elkanah said to her, “Do as you think best. Stay home until you have weaned him. May the LORD fulfill His word.” So the woman stayed home and nursed her son until she weaned him.

1:24           When she had weaned him, she took him up with her, along with three bulls, one ephah of flour, and a jar of wine. And though the boy was still very young, she brought him to the House of the LORD at Shiloh.

My heart exults in the LORD;

Ihave triumphed through the LORD.

I gloat over my enemies;

I rejoice in Your deliverance.

Truly, there is none beside You;

Let no arrogance cross your lips!

For the LORD is an all-knowing God;

By Him actions are measured.

And the faltering are girded with strength.

Men once hungry hunger no more.

While the barren woman bears seven,

The mother of many is forlorn.

Casts down into Sheol and raises up.

He casts down, He also lifts high.

Lifts up the needy from the dunghill,

Setting them with nobles,

Granting them seats of honor.

For the pillars of the earth are the LORD’S;

He has set the world upon them.

But the wicked perish in darkness-

For not by strength shall man prevail.

He will thunder against them in the heavens.

The LORD will judge the ends of the earth.

He will give power to His king,

And triumph to His anointed one. 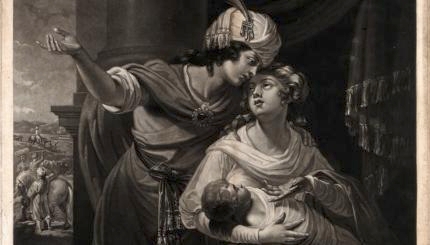 How she waited and prayed patiently for a child and was rewarded.

A story of reconciliation.