On the opening page of our tractate, we learned in a mishnah that the new year for counting years is the first of Tishrei, the day we know today as Rosh Hashanah. The mishnah also names the first of Tishrei as the day for counting sabbatical years — the one-in-seven year known as shmita — as well as jubilee years, the 50th year marked after seven cycles of shmita years. Unlike the shmita year, in which land is left fallow and debts are released, the jubilee year has even more significant practices, including the return of all property to its original owners and the freeing of all enslaved peoples.

On today’s daf, the Gemara wants to know how this is possible. After all, the Torah seems pretty clear that jubilee years begin not on the first day of Tishrei, but on the tenth, the day we mark today as Yom Kippur.

Leviticus 25:9-10 states: “Then shall you cause the shofar to sound on the tenth day of the seventh month, on Yom Kippur shall you sound the shofar throughout all your land. And you shall hallow the fiftieth year, and proclaim liberty throughout all the land to all its inhabitants; it shall be a jubilee for you.”

The Gemara attempts an answer:

From Rosh Hashanah until Yom Kippur of the jubilee year, Hebrew slaves were not released to their homes because the shofar had not yet been sounded. And they were also not enslaved to their masters, as the jubilee year had already begun. Rather, they would eat, drink, and rejoice, and they would wear their crowns on their heads like free people. Once Yom Kippur arrived, the court would sound the shofar, slaves would be released to their houses, and fields that were sold would be returned to their original owners.

Today, the ten days between Rosh Hashanah and Yom Kippur are a time of repentance. But during a jubilee year, this was a period of rejoicing for enslaved people who were emancipated on Rosh Hashanah but were not yet free to return to their homes until Yom Kippur. Rashi notes that crowns were worn as a sign of their newly won freedom. One can only imagine that what the Talmud describes as a celebration might well have been viewed by the formerly enslaved as ten days of limbo.

Many centuries later, the verse from Leviticus — “Proclaim Liberty throughout the land unto all the inhabitants thereof” — was engraved into the Liberty Bell that now sits in Independence Hall in Philadelphia. In America too, there was a lag between the proclaiming of liberty throughout the land and actual freedom. It would be another 100 years after the biblical verse was engraved on the bell before Black Americans were freed from slavery. And even after Abraham Lincoln proclaimed the end of slavery on Jan. 1, 1863, it would take another two and a half years until enslaved people in Texas learned they had been freed, an event now marked as Juneteenth.

The sentiment behind the description of the jubilee year in the Torah and the Talmud reminds us that undoing slavery is not instantaneous. And in our day, sadly, it is still not complete. That work surely now rests with us.

Read all of Rosh Hashanah 8 on Sefaria.

This piece originally appeared in a My Jewish Learning Daf Yomi email newsletter sent on October 17th, 2021. If you are interested in receiving the newsletter, sign up here. 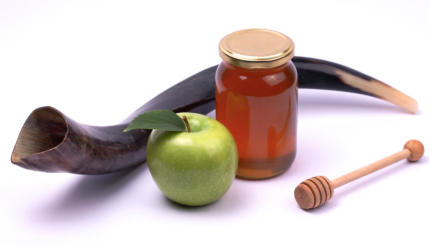 Visual symbols of the Jewish New Year include the shofar and apples and honey.