For most individuals, transitions from one life stage to another present both opportunities and challenges. Imagine what they are like when applied to the life stages of a people. This week’s Torah portion, Ki Tavo, continues the people’s preparation for changing from the state of wandering to that of being settled on the land. Ritual is created to cement this transition and to remind us of our current and former conditions.

Ki Tavo contains three major segments that continue the review of the law that Moses began in Ki Teitzei. First, he tells the Jewish people that when they enter and settle the land, they are to bring the first fruits as sacrifices and details the ceremony for doing so. Then, he reviews the system of tithing for the poor. Finally, he details the procedures for crossing the Jordan and for establishing their and G-d’s presence by building an altar and by writing the law on stones. The entire remainder of Ki Tavo is spent on the consequences of following or ignoring the laws–the blessings and the curses that would result. We read:

Why were the Israelites commanded to give to G-d their first fruits? Imagine that you have wandered in the desert for forty years, battled for your survival, and established a new home. Finally, when the crops are ready, you are told to put off a bit longer from partaking of them so as to give up the very best as an offering. In his Guide for the Perplexed, Maimonides states that this is because “the first of everything is to be devoted to the Lord; and by doing so we accustom ourselves … to limit our appetites for eating and our desire for property.”

As Nechama Leibowitz, the late Israeli Bible commentator, points out, the Akedat Yitzhak (15th century work by the Spanish philosopher and commentator Isaac Arama) suggests that the first fruits were offered to act as a constant reminder that “the earth is the Lord’s….everything is a gift bestowed by God and God is responsible for all prosperity –t herefore, with the bringing of the first fruits, we acknowledge the Divine overlordship.”

After their long journey to Jerusalem and joyous reception in Jerusalem, those bringing an offering would proclaim, “I have come to the Land which the Lord swore to our fathers to give to them,” and then present their baskets to the priests, saying: ” …..A wandering Aramean was my father, and he went down to Egypt and sojourned there, few in number; and he became there a nation, great, mighty and populous…” (Deuteronomy 26: 3-5)

This verse should sound familiar, for it’s found in the Passover Haggadah and is a critical part of the narrative of the Exodus. Why are the same words used for offering first fruits and celebrating the leaving of Egypt? I suggest that there’s no better time to remember where you came from, your family history and your roots, than when celebrating the harvest in the Land. In the intensity of the moment, it’s so easy to lose sight of the historical perspective. This ritual, which is made possible because of our connection to the Land, becomes the more powerful when we remember our past wanderings.

Nechama Leibowitz points out that, just as in the Passover Haggadah, we learn that in “every generation every Jew is obliged to see him/herself as if s/he had gone out of Egypt,” so at the time of the offering of the first fruits, “every generation is to also regard itself brought to the Land of Israel by G-d.”

The ceremony concludes, “And now, behold, I have brought the first of the fruit of the land which You our Lord have given me” (Deuteronomy 26:10). Here again, the connection with the Land is being reestablished. The Land that G-d has given the people is bearing the fruit that is being delivered as an offering; their relationship with the land and G-d’s role in their sustenance is being reinforced.

Concerning tithing–giving of the crops to the Levite, the stranger, the fatherless and to the widow — the Israelites are told to declare at the conclusion of this ritual: “[I have done] just as You commanded me: I have neither transgressed nor forgotten any of Your commandments” (Deuteronomy 26:13).

The 19th and early 20th century Torah interpreter and teacher known as the Sfas Emes (Rabbi Yehudah Aryeh Leib of Ger) asks: Shouldn’t it be clear that anyone who has obeyed the law hasn’t forgotten it? Why is the text redundant? He explains that this reminds us that we shouldn’t do things in a routine way, but rather that we should act with intent. Most of us can think of instances in our lives when we’ve engaged in an activity or conversation while our minds really were somewhere else. The Sfas Emes admonishes us to work against this.

The last specific item related to the settling of the land refers to the setting up of an altar of stones on Mount Ebal, the offering of sacrifices and the writing of the law on the stones. In his Torah commentary, Rabbi Samson Raphael Hirsch, the 19th century German scholar whom many consider the founder of modern Orthodoxy, points out that it is significant that this is the very first act of the Jewish people upon entering the Land.

He adds that this ritual, which symbolizes the establishment of a place of worship and of religious instruction for children, has served as a model for the way that a Jewish community should be initiated. It is significant that the Law was to be written and displayed publicly, indicating that it belonged to everyone and that it was each person’s responsibility to become familiar with it.

Chapter 28 of Deuteronomy, which is referred to as the Tochechah (warning), outlines the consequences of following or ignoring the laws. It includes a jarring view of the horrific calamities that will befall the Jewish people if the laws are not followed. Why is it necessary to describe these detailed, disturbing consequences? Is the intention to motivate through fear? If so, what’s the impact of this type of motivation?

We all know that there are times when encouragement and reward alone don’t ensure that certain patterns of behavior will be maintained. However, one pays a psychological price for relying upon negative incentives — and the portion leaves me wondering at the effectiveness of this method. Some balance is provided by the six blessings that proceed the warnings, but a glance at the text devoted to each –1 4 verses of blessings, 53 of warnings — leaves no doubt about where the emphasis is placed. This imbalance provides “food for thought when” one considers that many have suggested that we’re a people that responds more to crises than well-being. Unfortunately, fear sometimes is a necessary incentive.

Through every component of the ritual described in the portion’s first two chapters, then, connections are made among the Jewish People’s history, its relationship with G-d, and its connection to the Land of Israel. The last section (the blessings and warnings) focuses on solidifying the desire to observe all of the laws and therefore reinforces these connections.

We are near the culmination of the 40-year journey. May our own journeys bring us as vivid a connection to our people’s history, to the Land, and with the Almighty.

It’s The Joy, Not The Oy

Our religious and spiritual experiences of serving God should be joyful and uplifting. 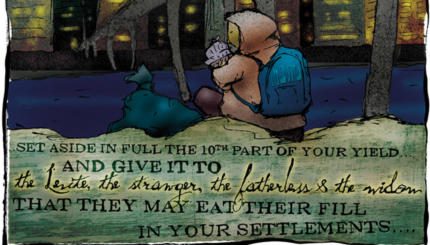 The Torah's commandment regarding the first fruits offers a kernel of wisdom about the importance of knowing where we came from.