Did Esau Have ADD/ADHD?

With a quick Google search you can pull up a a list of The 25 Worst Things that Siblings Have Ever Done to Each Other, but if I am being honest, the anecdotes you’ll find there — peeing on a sister in the bath, hanging a brother by his underwear — feel pretty mild compared with the first 25 chapters of the Book of Genesis. The Bible brings us stories of fratricide, banishment, and—in this week’s Torah portion –birthright theft. Makes a little bathtub pee seem pretty tame, no?

I imagine I am not alone in admitting that, shortly before the birth of my second child, there were some meltdowns and moments of panic. Sure—I had the garden variety: how on earth are we going to afford two (especially given how much it cost to have each of them)? And how will I ever love another kid like I love my first? But, I also had one that is, if not unique, less common. As two only children, I began to worry—significantly—about how my partner and I would raise siblings. As anyone who has been in therapy will tell you, your family of origin is a primary shaper of the relationships in your life—and, well, neither of ours have siblings in the mix.

This week’s Torah portion, which happens to be the one into which my second child was born, seems like a good primer of what NOT to do if you’re looking to raise those siblings without rivalry. As Rebecca and Isaac bring up their twins, Jacob and Esau, we read that:

When the boys grew up, Esau became a skillful hunter, a man of the outdoors; but Jacob was a mild man who stayed in camp.

Isaac favored Esau because he had a taste for game; but Rebecca favored Jacob.

Now, I do not know much about raising children, but I seem to recall somewhere along the way that one of the keys is not to show favoritism — besides the obvious choice of whichever kid slept the most the night before. Even before becoming a parent, I was challenged by this text — and I continue to be. But, I also think there is a profound statement about human nature here. We are drawn to people who are most like us — who value the things we value, and whose interests match ours. It is natural, and it is necessary— but it is also not enough. Because in our families, biological and chosen, we are going to be in relationship with people who are different from us, and we must love and celebrate them as well.

But, I think this portion also raises questions about the inevitability of our lives–are we destined to be forever who we are, or do we have the capacity for change? There is a Midrash (a rabbinic teaching) that elaborates on the passage in this Torah portion when we learn that Rebecca’s pregnancy is a difficult one, and she calls out in distress:

But the children struggled in her womb, and she said, “If so, why do I exist?”She went to inquire of Adonai, and God answered her, “Two nations are in your womb, Two separate peoples shall issue from your body; One people shall be mightier than the other, And the older shall serve the younger.”

The Midrash then goes on to try to explain the nature of her discomfort, saying:

When Rebecca would pass a synagogue, or house of study—Jacob would kick, trying to get out. But, when she would pass a place of idolatry, Esau would kick. (Genesis Rabbah 63:6)

I am less interested in the polemics behind this understanding, though there are certainly many (and others have written on them) as to the dynamic it sets up. Because, of course, these personalities and characteristics, play themselves out in the lives these boys lead. Jacob is the quiet, gentle scholar; Esau is the wild man, physical, violent. Behind the political motivations that influenced our ancient rabbis’ reading of the story (particularly a desire to vindicate our patriarch Jacob), we might ask what does it mean—as parents or as humans—when we make assumptions on who someone is going to be before we’ve met them? As parents or as humans, as friends and as teachers, how do we honor and nurture innate talents and interests, and also give space to allow children—and adults—to explore different possibilities and different futures for themselves?

Over the summer, I read Laurie Frankel’s remarkable novel, This Is How It Always Is, about parenting a gender-queer child. I found myself highlighting its profound and beautiful insights, not just on parenting—but on being in relationship in the world. In two of these highlights, she writes:

“You can’t tell people what to be, I’m afraid,” said Rosie. “You can only love and support who they already are.”

These kids, her multitudes, they could grow up. They could move Away. They could—they would—become new, become changed, become actual adult people in progress, people she wouldn’t recognize, people she could not imagine. People remade. They would undergo miracles. They would transform.

At first blush, side by side, these quotes seem contradictory — the first suggests a fixed nature, the idea that, as with Jacob and Esau, who we are in the womb determines who we will be in the world. And the second speaks of potential, of our abilities to grow and change, to be different tomorrow than we are today.

Parashat Toldot unfolds along the lines drawn in Rebecca’s womb. Esau, the man of the fields, sells his birthright to satisfy his basic physical needs and human desires. Jacob, the homebody, uses his mind and intellect to trick his father into giving him the blessing reserved for his brother. The Torah— and later Jewish tradition— maintains this dichotomy: Esau is forever painted as the wild man, the violent one, while Jacob becomes the dynastic patriarch of the Jewish people, wise and gentle.

But what might their futures — ours — have looked like if someone had helped Esau nurture other facets of his personality, had helped him balance his physicality with social and emotional growth? What might Jacob had learned if he’d been encouraged to trust and challenge his body?

Later in his life, with the tables somewhat turned, Jacob has the opportunity to bless all of his children (in Parashat Vayechi, just wait a few weeks). And his blessings are profound — they are both realistic, addressing each child for who they are in the world, and aspirational, giving a hope for who and what they can be. Perhaps (after the own unfortunate results of him favoring one child, Joseph, over his others), he learned from what his parents could not give him— and perhaps we can too.

Parents or not, our job — living in the world of relationship — is to help the people that we love to bridge the two: the current and the aspirational. It is to help people—our children and our students, our friends and our family — to become most fully who they are now — and then guide them and nurture them on the path to becoming who they want to be.

And along the way, perhaps we too, will become new, become changed, transform. 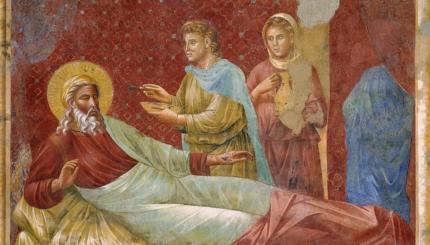