The story of Joseph is found in the Book of Genesis, from Genesis 37 though Genesis 50. Joseph’s saga is both expansive and integral to the overall narrative of the Israelites’ descent into Egypt. His progression from dream-interpreting shepherd to minister of Egypt is one of the more layered and elaborate stories in the Torah.

It is also one of the best known, alluded to frequently in Western literature and adapted by Andrew Lloyd Weber and Tim Rice into the operetta Joseph and the Amazing Technicolor Dreamcoat. The dramatic tale spans four weekly Torah portions (Vayeshev, Miketz, Vayigash and Vayehi), an impressive amount of ink considering that many other major biblical stories are told in less than one Torah portion.

Joseph and His Brothers

Joseph’s life is a series of highs and lows — literally and figuratively. In his father’s house, Joseph is the favored son: “Israel (another name for Jacob) loved Joseph more than all his sons since he was a child of his old age” (Genesis 37:3). Joseph likely also has this status because he is the eldest child of Jacob’s favorite (deceased) wife, Rachel. To demonstrate this preference, Jacob gifts Joseph with the famous kitonet passim, translated as both a garment with long sleeves, or a fine woolen tunic. (Commentators extrapolate that it had stripes of different colors.) This preferential treatment from their father elicits much jealousy from Joseph’s 10 older brothers.

As a teenager, Joseph does little to ingratiate himself to his brothers. To find more favor with his father, he would report back unkindly about his older brothers’ activities while tending to the flocks (Genesis 37:2). Joseph also tells his family about two dreams he had, the first in which 11 sheaves of wheat bow down to his, and a second where the sun, moon, and 11 stars all bow to him as well. In each case, Joseph interprets the dream as meaning that one day he will rule over his family (Genesis 37:5-11).

Eventually the brothers act on their emotions. Seeing the “dreamer” approach on a shepherding trip, they ambush Joseph and throw him into a pit — the first of the great depths to which Joseph will sink. The brothers soon sell him to Midianites who in turn sell him to an Ishmaelite caravan headed down to Egypt, continuing Joseph’s descent. The brothers then tear up Joseph’s special coat, dip it in goat’s blood, and present it to Jacob as proof of his son’s death. 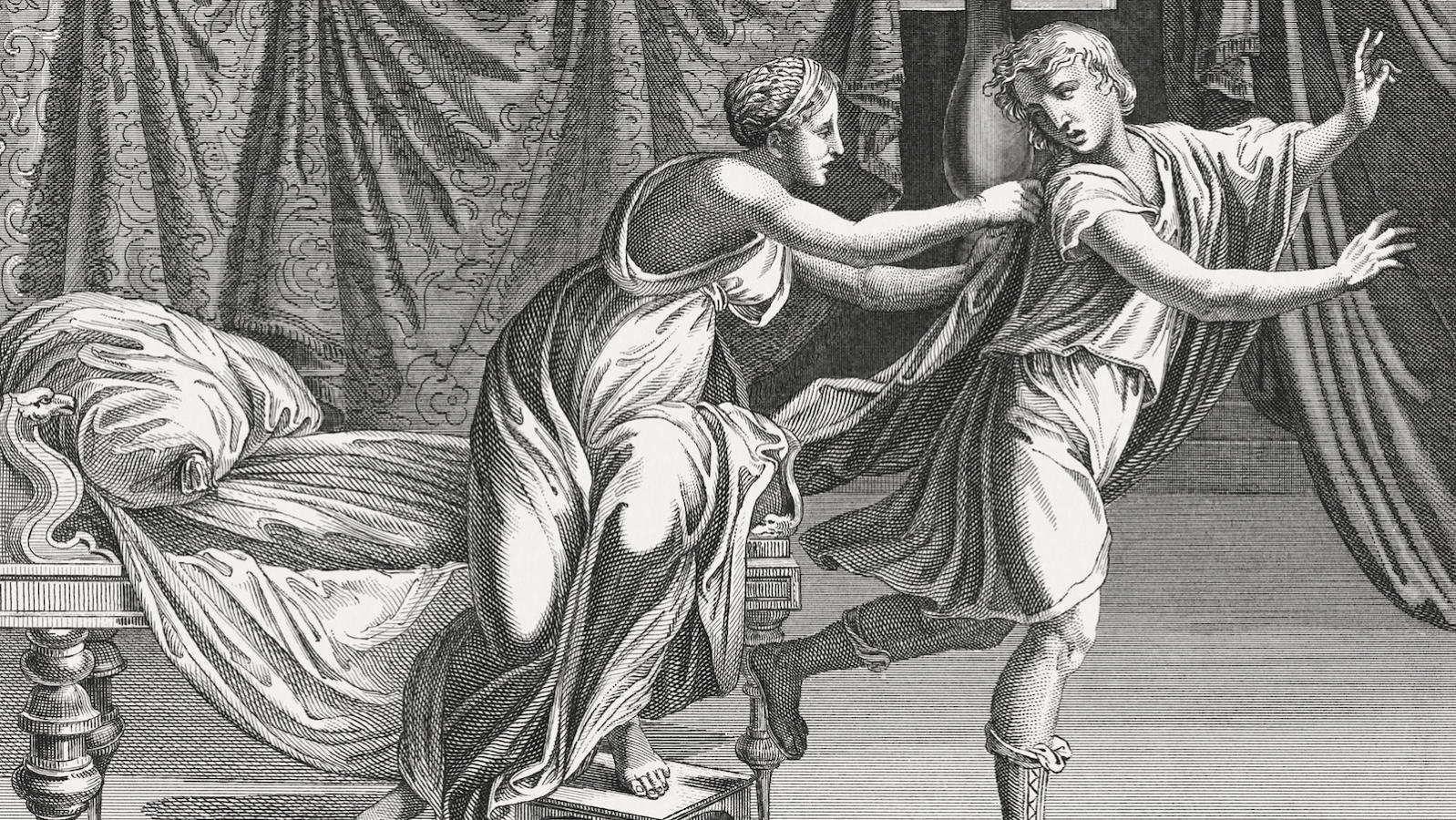 Joseph’s time in Egypt is even more tumultuous than his life in Canaan. The Ishmaelite traders sell him as a slave to Potiphar, a wealthy Egyptian merchant. Joseph finds great fortune with Potiphar, but his promotion through Potiphar’s household attracts the attention of Potiphar’s wife, who repeatedly tries to seduce him. When her attempts fail, she accuses Joseph of rape, which lands him in prison.

Though now in the deepest of his life’s trenches, God is still with Joseph (Genesis 39:21). His fellow inmates, Pharaoh’s former butler and his former baker, both dream symbolic dreams, and Joseph’s skills as a dream-interpreter are put to use. He predicts that the butler will be exonerated in three days and restored to Pharaoh’s service, and that the baker will be put to death. Joseph’s interpretations come true.

Joseph asks the butler to remember him once he’s back in Pharaoh’s service, but the butler doesn’t fulfill his promise until Pharaoh himself has a series of disturbing dreams two full years later. These dreams prove to be Joseph’s ultimate turn of good luck. He is brought to the court to interpret two famous dreams of Pharaoh: one in which seven sickly cows consume seven healthy cows, and a parallel dream in which seven sickly ears of grain consume seven lush ears of grain.

Joseph tells Pharaoh: “Seven years are coming, a great abundance through the land. Then seven years of famine will arise” (Genesis 41:25-30). With this knowledge in hand, Pharaoh prepares Egypt for famine. Joseph, at the age of 30, is appointed second-in-command to Pharaoh.

The famine that Joseph predicted ultimately brings the sons of Jacob to Egypt. With no other options, and hearing of excess grain in the neighboring country, Jacob’s sons make a series of trips down to Egypt. Upon discovering his brothers some 20 years after selling him into slavery, Joseph conceals his identity and tests his family, locking up his brother Simeon until the rest of the brothers return with Benjamin (Genesis 42:33-34).

Jacob is reluctant to send Benjamin — his last child of Rachel — but he ultimately relents. Only upon seeing Benjamin does Joseph reveal himself to his brothers, grant them forgiveness, and bring the entire family down to Egypt.

Joseph dies in Egypt at the age of 110. Before dying, Joseph makes his children promise that when the Israelites eventually leave Egypt, they will take his remains with them. In the story of the Exodus (13:19), Moses does just that, carrying Joseph’s bones on the way to Israel.

Jewish commentaries, both traditional and modern, generally view Joseph as a complex character who was ultimately a righteous person. Though some commentators such as Sforno acknowledge the immaturity of his actions when dealing with his brothers in his youth, still Joseph is largely regarded as an admirable figure for maintaining his Israelite identity in spite of his 20-year separation from his family. Tradition notably refers to Joseph as a tzadik (righteous person), and several commentators point to Joseph’s naming of his sons in Hebrew as a premiere example of his dedication.

Even with Joseph’s more questionable actions, like not contacting his family once he became viceroy of Egypt, or testing his brothers by accusing them of being spies, the commentators refer us back to Joseph’s adherence to the messages of his dreams. Both Rashi and Nahmanides validate Joseph’s actions by positing that he knew the importance of fulfilling those prophecies. For these commentators, the ends of fulfilling God’s will justified the means of Joseph’s actions.