Parashat Toldot introduces our Patriarch Jacob as well as his brother Esau, and, from the outset, tips us off to the coming conflict between them. The Torah tells of their “struggle” within their mother’s womb, and, as young adults, describes them very differently.

Esau is “a hunter, a man of the field,” while Jacob is “ish tam,” (a simple/whole man) who sits in tents. These textual descriptions, Rashi and Ibn Ezra point out, indicate that Esau is a “trickster,” a man not to be trusted, while Jacob is a “simple” or “naive” shepherd, who spends his days studying Torah.

Who is the Victim?

Yet, the comments of these rishonim (medieval sages), which echo those of Chazal (rabbinic sages) seem to be at odds with the simple understanding of the narrative.

Consider, as events of the portion unfold, who is the trickster and who is the victim. Even as they were being born, Jacob grasped Esau’s ankle, trying to force his way out of the womb first.

Later, as young adults, Esau returns from a day of hunting famished and exhausted, begging his brother for food. Jacob demands Esau’s birthright in exchange for some soup. Then, when Rebecca proposes that Jacob disguise himself as Esau in order to “steal” his berachah (blessing) from Isaac, Jacob protests–not because of the deception involved, but because he fears getting caught and consequently cursed by his father.

Nevertheless, despite these indications of Jacob’s trickery and Esau’s victimhood, Chazal find indications of Esau’s evil. They point to his readiness to sell the bechorah (birthright) as well as to the wives he took, who aggravated his mother, Rebecca. Thus it seems all the more amazing in light of Chazal’s insights that Isaac seemed oblivious to Esau’s evil and Jacob’s good such that he sought to confer his blessing upon Esau.

How are we to understand Jacob’s early actions, Isaac’s plan to bless Esau, Jacob’s theft of the berachah, and the subsequent confrontations that he faced–all in a manner that gives us insight into this Patriarch and leaves us, his children, with a message?

As noted by the Netziv (Rabbi Naftali Tzvi Yehudah Berlin, 19th century commentator), Isaac proposed to bless Esau with birkas haaretz (the blessing of the land)–physical plenitude and mastery over the physical world. Reserved for Jacob, and conferred upon him by Isaac before he fled to Laban’s house, was birkas Avraham (the blessing of Abraham)–the blessing that Abraham received ensuring that his descendants would be God’s chosen nation.

Isaac had no reason to think that one of his sons would be rejected; he believed they would both lead this chosen nation as partners, with Esau as General, mastering the physical world and Jacob as High Priest, carrying on the spiritual legacy.

However, Rebecca, the mother of these two brothers and, importantly, reared as the sister of Laban, (as emphasized in the second verse of the Torah portion), knew that such a partnership was impossible. She understood that Jacob needed both blessings–to combine spiritual strength with mastery over the physical world–in order to be the father of the Jewish nation.

Accordingly, she orchestrated the “theft” of the physical blessing in a context wherein Jacob would be introduced to his destiny–to be a person with kol Yaakov (the voice of Jacob) but also with yedei Eisav (the hands of Esau).

She thus wanted Jacob to undergo an apprenticeship with her brother, Laban, the master trickster, so that he would know how to combine these traits. He achieved mastery over the physical world, the Keli Yakar (17th century commentator), points out (Genesis: 31:1) when he surpasses Laban’s ability to beguile his adversaries.

After this “education,” the fully developed Jacob is commanded by God to return to Canaan, whereupon he wrestles with Esau’s angel and is given a new name: Yisrael. This new name demonstrates his completed evolution, a name by which we, his descendants, are called: Benei Yisrael (the Children of Israel). 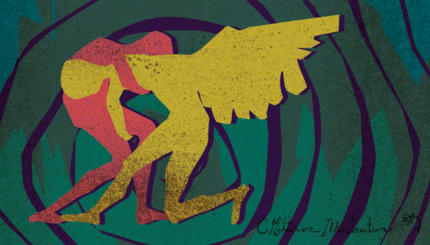