Although the destruction of the Temple (70 C.E.) eliminated the conditions that required priests to preserve certain laws of purity, the influence of such laws nevertheless continues. According to Parshat Emor, a priest (kohen) has to guard against possible defilement at all times. A movie produced by several religiously observant students at the Ma’ale School of Television, Film, and the Arts in Jerusalem illustrates some consequences of these laws for their contemporary circles.

Entitled “Cohen’s Wife,” this film concerns Rivki Cohen, a young ultra-Orthodox woman who opens the door slightly for a strange man who has come asking for tzedakah (charity). The stranger then forces his way in and rapes her. This crime renders Rivki ritually impure to her husband. The film deals with how the husband approaches the rabbinical court as to whether he — a kohen — must divorce his wife because she is now defiled.

This deeply moving film depicts a loving couple that desperately wants to remain married while at the same time wanting to observe Jewish law. The wife turns out to have the key to saving the marriage — by not saying the words “I was raped,” and certainly not to her husband. Thus, since there was no witness, the husband could seek a sympathetic set of rabbis who simply would pretend that the rape had not taken place, thus allowing the couple to remain intact.

The problem, of course, is the guilt and confusion that both the wife and husband feel after the rabbinic decision; have they themselves resolved the problem or not? Will they be able to live their lives in peace with their guilty secret? This movie, like most made at Ma’ale, exposes viewers to the human conflicts, tragedies, and even comic situations that arise when people wish to live both according to Jewish law and to their honest feelings.

While we can expect the laws of Leviticus to have a strong impact primarily in certain religious circles, other ideas in Parashat Emor continue to have subtle ramifications for general society. One example is the stress found in Parashat Emor on the ideal of physical “perfection.” Leviticus 21:17-20 disqualifies a descendant of Aaron from carrying out the rituals of the priesthood if he is subject to certain physical deficiencies or disfigurations. Physical imperfection, it seems, impairs holiness. While the priest’s bodily perfection may no longer be a Jewish necessity, the idea and expectation of bodily perfection have become a cultural goal of the wider American Jewish population, with terrible consequences — particularly for women, regardless of age.

By now most people are aware that many American Jewish girls starve themselves or over-exercise to become thin, or they have surgery on their noses and elsewhere to be more beautiful. So too, older Jewish women undergo a wide range of plastic surgery to remain attractive. To learn more about this drive among young girls be pretty at all costs — and to be intolerant of those in who are not — see The JGirl’s Guide: The Young Jewish Woman’s Handbook for Coming of Age (co-authored by me, Penina Adeiman, and Ali Feldman, 2005).

Mothers pass the goal of beauty on to their daughters, and men reinforce it. By manipulating women’s self-confidence about their appearance, the beauty industry has become a highly lucrative business. The point is that each girl or woman considers herself to be defective or imperfect, no matter what she does. This idea derives from the notion that there is such a thing as bodily perfection, a concept presented in Emor.

The motivation to be beautiful by any means should not be dismissed out of hand as misguided, however. After all, the Bible and much of Western culture frequently equate beauty with goodness.

Several admired matriarchs — Sarah and Rebecca, for example — are described as beautiful, even “very beautiful.” In fact, one term for beauty in the Bible actually uses forms of the word tov (good), further promoting such associations. Thus, kindly Rebecca is tovat mar’eh (“exceedingly beautiful,” Genesis 24:16). And Esther is touted for her beauty, which enables her to carry out later virtuous deeds. Based on these cases and many others, I suggest that the Torah’s preference for beauty is a clear theme that appears in many places, including the Emor section on the necessity for physical perfection among priests.

By and large it is not only the preference for beauty that has spilled into Western culture, but also the equation between beauty and goodness. Children’s fairy tales typically feature the beautiful princess who is good, the handsome prince who is also good, and the ugly witch who is evil. Psychologists have found that people who are attractive are trusted more than those who are not; handsome people are likely to rise in the ranks of their organizations and be elected to office. Physically attractive individuals, research shows, are perceived as more intelligent, sociable, talented, and moral. There is even a term for this prejudice: beautyism — the idea that what is beautiful is good, and what is not beautiful is bad.

Beautyism is a danger to the self-esteem of those who are not physically attractive and can lead to arrogance among those who are. While efforts to urge children to look beyond physical appearance may address race and disability, they almost never deal with beauty. This silent prejudice is thus able to persist and be reinforced throughout popular culture, religious instruction, and the education system.

Some passages in the Bible, however, do not equate beauty with goodness, possibly in an attempt to counteract the heavy emphasis on the subtle equation elsewhere. Ruth, for example, is a model of goodness but is never called beautiful. More notable is the description of the “woman of valor” (eshet chayil) in Proverbs 31, which explicitly repudiates beauty as a criterion for virtue: “Grace is deceptive, and beauty is illusory; it is for her fear of God that a woman is to be praised” (Proverbs 31:30). Yet the negation can be also read as an admission that the cultural norm is otherwise.

Emor’s implication that a priest must not remain married to his wife if she is raped is a case of punishing the victim. So, too, Emor’s exclusion of a blind descendant of Aaron from priestly activities punishes the handicapped. Contemporary society tries not to punish rape victims or disabled individuals. While it is true that we have tried to distance ourselves from these two ancient ideas, we have made hardly any progress with regard to the obverse, that is, unfairly rewarding those who are physically beautiful and punishing those who are not.

Reprinted with permission from The Torah: A Women’s Commentary, edited by Tamara Cohn Eskenazi and Andrea L. Weiss. 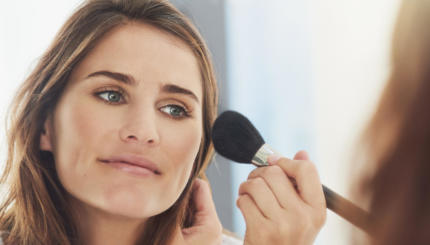 Is beauty an inherent Jewish value?

Moses's wife was a Midianite.