The following verses describe the ritual of Sotah, the Temple ritual that would ascertain whether a wife had committed an act of infidelity. The usual norms for determining guilt do not apply presumably because the need to alleviate jealousy between husband and wife require extraordinary measures. The verses describe a stark ritual that Maimonides sees as a means for deterring a jealous husband from bringing charges and also as a deterrent for infidelity in general. (Guide of the Perplexed Section III:49).

The Mishnah, written nearly a thousand years before Maimonides says that Rabbi Yohanan Ben Zakkai stopped employing this ritual because adultery had become commonplace in Israel, and the ritual no longer worked either as a deterrent, or as a means for getting at the truth. (Mishnah Sotah 9:9).

In other words, according to the Mishnah, the Sotah ritual was abolished while the Temple was still standing. Look at the following verses, and use these questions to guide you:

1. List the stages of the ritual.
2. Why do you think the verses must be erased in water?
3. Is it significant that God’s Name is erased in the document? Why?
4. The symbols of water and dirt and words make this ritual unique. Why are these things appropriate?
5. What is the man’s iniquity?
6. Once the ritual has been abolished, can any moral instruction be gleaned from its description?

(12) Speak to the Children of Israel and say to them: Any man, any man whose wife goes astray, breaking faith, yes, faith with him, (13) in that a man lay with her, (with) an emission of seed, and it was hidden from the eyes of her husband, she concealed herself, since she had made herself tamei (impure) and since there was no witness against her, she was not apprehended?

(27) When he has had her drink the water, it shall be: if she made herself tamei and broke faith, yes, faith with her husband, the Water Bringing the Bane shall enter her, for ‘bitterness,’ her belly shall flood and her thigh shall fall, and the woman shall become an object of curse among her kinsfolk.

(28) But if the woman did not make herself tamei and she is pure, she is to be cleared and she may bear seed, yes, seed.

29 This is the Instruction for cases of jealousy, when a woman strays under her husband(‘s authority) and makes herself tamei, (30) or when there comes over a man a rush of jealousy, so that he is jealous toward his wife: he is to have the woman stand before the presence of YHWH, and the priest is to perform regarding her (according to) all this Instruction. (31) The man shall be clear of iniquity, but that woman shall bear her iniquity.

The following midrash, which recounts an event that occurred years after the Sotah ritual had been abandoned, describes an event where a wife returns home later than expected from Rabbi Meir’s Torah lesson. Her husband is enraged…

R. Zechariah, the son-in-law of R. Levi, related the following incident: R. Meir used to hold regular classes in the synagogue every Sabbath eve. A certain woman was present who regularly came to listen to him.

On one occasion he went later than expected. When she arrived home, she found the lights out. Her husband asked her: “Where have you been?” She told him: “I have been listening to a class.” He replied: “You may not enter this house until you go and spit in the face of the teacher.”

Through the Holy Spirit Rabbi Meir witnessed this. He then pretended to be suffering from pain in the eyes, and announced: “If there is any woman skilled in whispering charms for the eyes, let her come and whisper.” Her neighbors related this to her and said: “This is a chance for you to return home. Pretend you are a charmer and spit into his eyes [which was part of the charm].” When she came to him he said to her: “Are you skilled in whispering charms for the eyes?”

Daunted by his presence she answered in the negative. He said to her: “Nevermind, spit into this one seven times and it will get better.” After she had spat he said to her: “Go and tell your husband: ‘You bade me do it only once; see, I have spat seven times!’”

His disciples said to him: “Master! are the words of the Torah to be treated with such contempt as this? Had you told us, would we not have sent and fetched the man and given him a flogging on the bench and forced him to become reconciled with his wife?”

Said he to them: “The dignity of Meir ought not to be greater than that of his Divine Master.” If in the case of [the Sotah ritual where] the Holy Name which is so sacred, the Torah orders that it is to be blotted out in water, in order to bring about peace between a man and his wife, what does the dignity of Meir matter?

1. According to Rebbe Meir, what is the purpose of the Sotah ritual?
2. Does Rebbe Meir feel responsible for creating the problem between the man and his wife, or is he just making peace?
3 .Would you have rather seen the students’ solution implemented?
4. How does Rebbe Meir view the fact that the Name YHWH is blotted out in water?

The story of Rebbe Meir and his intervention raises many issues. It, in many ways, is a troubling story, just like the Sotah ritual is troubling. What strikes me as most powerful is not how Rebbe Meir “solves” the problem, but the fact that he accepts responsibility for what happened. He spoke longer than he was expected to, and he witnessed how that innocent discrepancy created discord at home. By the time she got home the lights had gone out in the house. It was very late.

Instead of castigating the husband for being calloused and unreasonable as he certainly was, Meir only focuses on how he can restore the relationship to what it was before this happened. He knows he can’t fix the dynamics between this man and his wife, he can only accept responsibility for making them worse. For this, he is willing to humiliate himself and the dignity of the Torah for a fragile piece of peace.

God describes the service of the Gershon family of Levites; laws relating to the suspected adulteress and the nazirite are given; God tells Moses and Aaron the priestly blessing; the heads of tribes bring gifts to the Tabernacle. 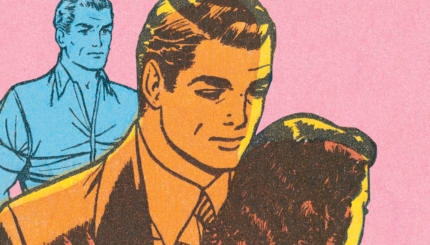 The importance of preserving the relationship between a husband and wife provides an example of the Torah's use of relative morality.