Reprinted with permission from MyIsraelSource.com.

Mr. Prime Minister,
The signing of the Declaration of Principles marks a new era in the history of the Middle East. In firm conviction thereof, I would like to confirm the following PLO commitments:

The PLO recognizes the right of the State of Israel to exist in peace and security.
The PLO accepts United Nations Security Council Resolutions 242 and 338.
The PLO commits itself to the Middle East peace process, and to a peaceful resolution of the conflict between the two sides and declares that all outstanding issues relating to permanent status will be resolved through negotiations.
The PLO considers that the signing of the Declaration of Principles constitutes a historic event, inaugurating a new epoch of peaceful coexistence, free from violence and all other acts which endanger peace and stability. Accordingly, the PLO renounces the use of terrorism and other acts of violence and will assume responsibility over all PLO elements and personnel in order to assure their compliance, prevent violations and discipline violators.
In view of the promise of a new era and the signing of the Declaration of Principles and based on Palestinian acceptance of Security Council Resolutions 242 and 338, the PLO affirms that those which deny Israel’s right to exist, and the provisions of the Covenant which are inconsistent with the commitments of this letter are now inoperative and no longer valid. Consequently, the PLO undertakes to submit to the Palestinian National Council for formal approval the necessary changes in regard to the Palestinian Covenant.

I would like to confirm to you that, upon the signing of the Declaration of Principles, the PLO encourages and calls upon the Palestinian people in the West Bank and Gaza Strip to take part in the steps leading to the normalization of life, rejecting violence and terrorism, contributing to peace and stability and participating actively in shaping reconstruction, economic development and cooperation.

In response to your letter of September 9, 1993, I wish to confirm to you that, in light of the PLO commitments included in your letter, the Government of Israel has decided to recognize the PLO as the representative of the Palestinian people and commence negotiations with the PLO within the Middle East peace process.

A brief history of the role of Jerusalem in the peace process. 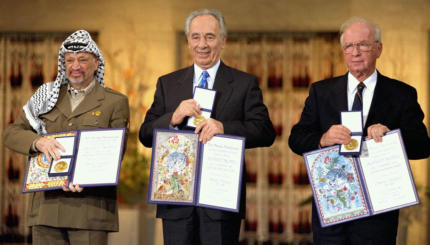 Israel and the Palestinians pursue peace.

An overview of Israel's relationship to the Sinai, the Gaza Strip, Jerusalem, the West Bank, and the Golan Heights, 1987 - 1998.