When I was a rabbi in Chicago, our shul, Anshe Sholom B’nai Israel, held a “Boilathon” every year — an opportunity for people to bring their dishes to the synagogue kitchen where we had a huge pot boiling and waiting to kasher their dishes and allow them to be used for Passover. I know amending “-athon” to something that has nothing to do with a marathon can be annoying, but trust me that “Passover Boilathon” is catchy. It was a fun event.

Whatever word you use for this process, as today’s page shows, the idea that not only do we need to purge leaven from our homes, but we also need to purge it from our kitchen utensils, is quite ancient:

Two things to notice: First, the point is to remove the taste of leaven from the cooking vessel. Especially in an era without modern glazes, one can imagine how tastes would linger in earthenware and wooden implements. Second, Rav Huna reasons that the same cooking method that causes the flavor of food to be absorbed into a cooking implement is the method that should be used to remove that flavor. In this case, since the ladle likely absorbed the flavor of whatever hametz it stirred from a pot of boiling food, it is through a pot of boiling water that the ladle is rendered kosher for Passover.

Rashi tells us that the practice of kashering implements goes all the way back to the days of Moses and the Israelites in the wilderness. After the Israelites captured dishes and vessels from their enemies the Midianites, they cleansed them: “any article that can withstand fire — these you shall pass through fire and they shall be clean … and anything that cannot withstand fire you must pass through water.” (Numbers 31:23)

Our daf today, both sides, discusses which types of vessels can be brought to your local Boilathon to be boiled and immersed for Passover (or for everyday kashrut) and which cannot; which need to be torched (a higher level of kashering) and which cannot be kashered at all. Which, also, don’t need to be brought to the Boilathon at all because they have not absorbed any flavor.

Materials span a range. Earthenware pottery was a hopeless case — it was considered impossible to remove the flavor of hametz from it by either fire or water. For that reason, earthenware was simply shattered ahead of the holiday, and new pots made after the week was out.

On the other hand, vessels of any material that never had contact with hot food were not a problem no matter what they were made of — because it was assumed that cold food would not transfer taste.

Today, many Jews circumvent a lot of this trouble by keeping an extra set of dishes just for Passover. (Of course, this means they miss out on their local Boilathon.) That solution also occurred to the rabbis:

Ravina said to Rav Ashi: With regard to these knives, how do we prepare them for use during Passover?

Rav Ashi said to him: For me, personally, we craft new ones.

Ravina said to him: It works out well for Master, as you are able to afford new knives. However, what should one who is unable to purchase new knives do?

Our rabbis knew that Judaism has to be affordable and reasonable. Indeed, many of the rabbis named in the Talmud were themselves poor. The Talmud works hard to strike the right balance between keeping the law to the highest level and respecting us hard-working folks just trying to make ends meet.

Read all of Pesachim 30 on Sefaria.

This piece originally appeared in a My Jewish Learning Daf Yomi email newsletter sent on December 21st, 2020. If you are interested in receiving the newsletter, sign up here. 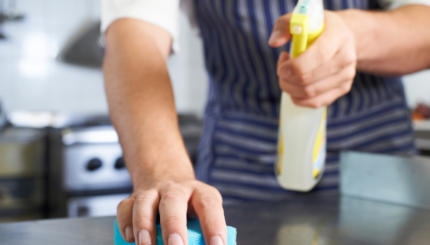 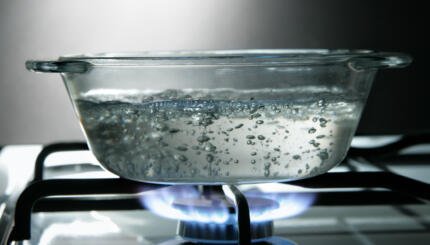 Whether glassware can be rendered fit for kosher use depends on who you ask.