The following peace treaty was signed at Camp David on March 26, 1979, by Israeli Prime Minister Menachem Begin and Egyptian President Anwar Sadat. Also present was U.S. President Jimmy Carter. It marked the first time an Arab neighbor of Israel agreed to recognize and live in peace with the Jewish State.

Convinced of the urgent necessity of the establishment of a just, comprehensive and lasting peace in the Middle East in accordance with Security Council Resolutions 242 and 338;

Reaffirming their adherence to the “Framework for Peace in the Middle East Agreed at Camp David,” dated September 17, 1978;

Noting that the aforementioned Framework as appropriate is intended to constitute a basis for peace not only between Egypt and Israel but also between Israel and each of its other Arab neighbors which is prepared to negotiate peace with it on this basis;

Desiring to bring to an end the state of war between them and to establish a peace in which every state in the area can live in security;

Convinced that the conclusion of a Treaty of Peace between Egypt and Israel is an important step in the search for comprehensive peace in the area and for the attainment of settlement of the Arab- Israeli conflict in all its aspects;

Inviting the other Arab parties to this dispute to join the peace process with Israel guided by and based on the principles of the aforementioned Framework;

Desiring as well to develop friendly relations and cooperation between themselves in accordance with the United Nations Charter and the principles of international law governing international relations in times of peace;

Agree to the following provisions in the free exercise of their sovereignty, in order to implement the “Framework for the Conclusion of a Peace Treaty Between Egypt and Israel”;

The state of war between the Parties will be terminated and peace will be established between them upon the exchange of instruments of ratification of this Treaty.

Israel will withdraw all its armed forces and civilians from the Sinai behind the international boundary between Egypt and mandated Palestine, as provided in the annexed protocol (Annex I ), and Egypt will resume the exercise of its full sovereignty over the Sinai.

Upon completion of the interim withdrawal provided for in Annex I, the parties will establish normal and friendly relations, in accordance with Article III (3).

The permanent boundary between Egypt and Israel is the recognized international boundary between Egypt and the former mandated territory of Palestine, as shown on the map at Annex II, without prejudice to the issue of the status of the Gaza Strip. The Parties recognize this boundary as inviolable. Each will respect the territorial integrity of the other, including their territorial waters and airspace.

The Parties will apply between them the provisions of the Charter of the United Nations and the principles of international law governing relations among states in times of peace. In particular:

They recognize and will respect each other’s sovereignty, territorial integrity and political independence;

They recognize and will respect each other’s right to live in peace within their secure and recognized boundaries;

They will refrain from the threat or use of force, directly or indirectly, against each other and will settle all disputes between them by peaceful means.

Each Party undertakes to ensure that acts or threats of belligerency, hostility, or violence do not originate from and are not committed from within its territory, or by any forces subject to its control or by any other forces stationed on its territory , against the population, citizens or property of the other Party. Each Party also undertakes to refrain from organizing, instigating, inciting, assisting or participating in acts or threats of belligerency, hostility, subversion or violence against the other Party, anywhere, and undertakes to ensure that perpetrators of such acts are brought to justice.

The Parties agree that the normal relationship established between them will include full recognition, diplomatic, economic and cultural relations, termination of economic boycotts and discriminatory barriers to the free movement of people and goods, and will guarantee the mutual enjoyment by citizens of the due process of law. The process by which they undertake to achieve such a relationship parallel to the implementation of other provisions of this Treaty is set out in the annexed protocol (Annex III).

In order to provide maximum security for both Parties on the basis of reciprocity, agreed security arrangements will be established including limited force zones in Egyptian and Israeli territory, and United Nations forces and observers, described in detail as to nature and timing in Annex I, and other security arrangements the Parties may agree upon.

A Joint Commission will be established to facilitate the implementation of the Treaty, as provided for in Annex I.

The security arrangements provided for in paragraphs 1 and 2 of this Article may at the request of either party be reviewed and amended by mutual agreement of the Parties.

This Treaty does not affect and shall not be interpreted as affecting in any way the rights and obligations of the Parties under the Charter of the United Nations.

The Parties undertake to fulfill in good faith their obligations under this Treaty, without regard to action or inaction of any other party and independently of any instrument external to this Treaty.

They further undertake to take all the necessary measures for the application in their relations of the provisions of the multilateral conventions to which they are parties, including the submission of appropriate notification to the Secretary General of the United Nations and other depositaries of such conventions.

The Parties undertake not to enter into any obligation in conflict with this Treaty.

Subject to Article 103 of the United Nations Charter in the event of a conflict between the obligation of the Parties under the present Treaty and any of their other obligations, the obligations under this Treaty will be binding and implemented.

Disputes arising out of the application or interpretation of this Treaty shall be resolved by negotiations.

Any such disputes which cannot be settled by negotiations shall be resolved by conciliation or submitted to arbitration.

The Parties agree to establish a claims commission for the mutual settlement of all financial claims.

This Treaty shall enter into force upon exchange of instruments of ratification.

This Treaty supersedes the Agreement between Egypt and Israel of September, 1975.

All protocols, annexes, and maps attached to this Treaty shall be regarded as an integral part hereof.

An examination of the development of the Israeli military. 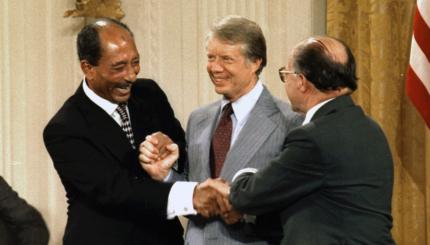 The Yom Kippur War led to a fragile but lasting peace between Israel and Egypt.