Many American Jews identify strongly with one of the major Jewish movements: Reform, Conservative, Orthodox, Reconstructionist and Renewal. Each movement has a network of synagogues, camps, youth movements and institutions that practice and teach a particular orientation toward Judaism. The denominations are mainly distinguished from one another on the basis of their philosophical approaches to Jewish tradition, as well as their degree of fidelity to and interpretation of traditional Jewish law, or halakhah.

How did these communities form?

Non-denominational and trans-denominational approaches to Judaism evolved throughout the mid-20th and early 21st century to meet the demands of Jews seeking community outside of the movements. The Havurah movement — influenced by the anti-establishment ethos of the 1960s — was especially influential in pushing Jews to think not just beyond the main movements, but also beyond the traditional synagogue environment.

For some, being non-denominational simply means not maintaining an affiliation with a specific movement for the sake of serving individuals from a wide variety of Jewish backgrounds. Used this way, non-denominational is a useful descriptor of many college Hillels or community day schools. Non-denominational synagogues also exist, and there is even a non-denominational rabbinic seminary, the Academy for Jewish Religion in New York, which first began ordaining rabbis in 1956.

Hadar Institute is another notable example. The Manhattan-based educational institution, which is both egalitarian and traditional in its approach to halakhah is, as co-founder Rabbi Ethan Tucker has explained, “not affiliated with any movement and is committed to the notion that the Torah speaks to and is accountable to all Jews.”

Non-denominational Judaism is also sometimes used to describe non-Ashkenazi communities, especially Sephardic communal life in North America. Distinct denominations as we know them today first developed in the 19th century in Ashkenazi communities. In Sephardic communities around the world, observance and belief certainly exist on a spectrum, but there is no membership-based organization that oversees Sephardic synagogues, community centers or schools as a movement.

Boston’s Hebrew College is also an influential trans-denominational rabbinical and cantorial school. It first opened in 1921 as Hebrew teachers’ college, with the intention of making the Hebrew language more accessible to American Jews. Hebrew College launched its ordination program in 2003.

Rabbis ordained at both of these trans-denominational institutions go on to work in a variety of leadership positions, ranging from Jewish education to serving as pulpit rabbis at synagogues that do identify with a specific denomination.

Many communities that exist outside the confines of the Jewish movements, such as IKAR in Los Angeles or Mishkan Chicago, began as independent minyanim and have since expanded to meet the needs of their communities. In other cases, synagogues — such as the Bnei Jeshrun Synagogue in New York City — that were once affiliated with movements and have since become independent.

Throughout the late 20th century and the 21st century, Jewish population surveys conducted by the Pew Research Center, universities, foundations and Jewish Federations have continually seen a rise in the percentage of Jews who choose not to identify with Reform, Reconstructionist, Conservative or Orthodox Judaism. This period has also seen a proliferation of non- and trans-denominational synagogues, spiritual communities, pluralistic yeshivahs and many other institutions and expressions of Judaism that are intentionally outside the large denominations. 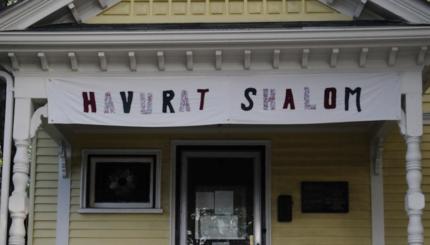 The havurah movement and The Jewish Catalog blended Judaism with the 1960s counterculture.