I have many jobs, but the one I am most proud of, and take most seriously, is being a mom to my five-and-a-half year old daughter.

The Talmud in Kiddushin lists what parents must do for their children. The list includes circumcising sons, redeeming firstborn sons from Temple service, teaching them Torah, organizing their marriage, teaching them a trade and teaching them to swim. Essentially, these obligations ensure that a child will have a strong foundation to live their lives independently. From the perspective of the Talmud, children given such a foundation will ideally be connected to the Jewish community through circumcision, freed from serving in the Temple, possess morals through Torah learning, have companionship and heirs, enjoy a means of supporting themselves, and be able to swim to save their lives.

That final obligation has always stuck with me. It was emblazoned over the pool at the JCC in Milwaukee where I often swam when I was pregnant. Teaching my daughter to swim has always been an important value for me, and since it is mentioned next to teaching a trade, we can understand that both these obligations are related to a child sustaining itself, keeping itself alive.

When I think about raising a daughter in the world today, the most urgent responsibility I feel is teaching her to defend herself. Even more so than swimming, self-defense feels like the skill most likely to save her life. I almost rescheduled our family vacation two weeks ago so she would not miss her Jiu Jitsu lessons.

In addition to being able to physically defend herself, I endeavor to teach her how to advocate for herself. This is also a skill that will help her sustain herself, as we see in this week’s Torah portion. There we learn that a man named Tzelofechad died with no sons to inherit his portion of the promised land. He did have five daughters, but they stood to receive nothing since, according to the Torah, women could not possess land. They would have nowhere to live, no place in the promised land. What a terrible injustice for them and the other unnamed women among the Israelites.

The daughters — Machlah, Noa, Choglah, Milkah and Tirzah — brought their case in a most distinguished manner. They did not just come before Moses, but also Eleazar, who had replaced his father Aaron as priest, the elders of the community, and the whole assembly. They presented their case at the entrance to the Tent of Meeting, a public place, often reserved for community ritual and acts of holiness.

I want to write that the daughters of Tzelophechad were unafraid, but I’m sure that is not true. Can you imagine walking through the crowds to challenge Moses in front of everyone? The last person to attempt such a feat was Korach and things did not turn out so well for him.

I’ve been teaching my daughter that being brave is not synonymous with being unafraid. Fear is real and gives us important feedback about potential dangers. And there might have been very real consequences for the daughters of Tzelophechad. They might have ended up like Korach. There was no way for them to know how their challenge would be received.

The Jewish value of ometz lev, courage, is about having fear and still moving forward. This is the essence of a well-known, and often misquoted, teaching from the great hasidic master Rebbe Nachman of Breslov, which is commonly rendered thus: Kol ha’olam kulo gesher tzar me’od, v’haikar lo lefached klal. The whole world is a very narrow bridge, and the main thing is not to be afraid.

This teaching is based on a line from Rebbe Nachman’s work Likutei Moharan. But the language there is slightly different. Instead of lo lefached klal (do not be afraid at all) we find there lo yitpached klal, which literally translates as “do not let yourself be afraid” — meaning do not let yourself be so afraid that you succumb to it. These are two very different sentiments. Rebbe Nachman’s teaching acknowledges that there will be fear in life. The point is not that we shouldn’t experience fear at all, but rather not to allow fear to keep us from going forward. Like the daughters of Tzelophechad, we move forward with and through fear.

In the end, Moses brought their challenge directly to God, who sided with the women and issued an amendment to the Torah. Their bravery led God to change the Torah.

In teaching our children to have strong voices and speak up and out against injustice, may the courage of the daughters of Tzelophechad serve as an example for how to move forward through fear. And may our children also use their voices to challenge the Divine and bring more justice into their world.

This article initially appeared in My Jewish Learning’s Shabbat newsletter Recharge on July 23, 2022. To sign up to receive Recharge each week in your inbox, click here. 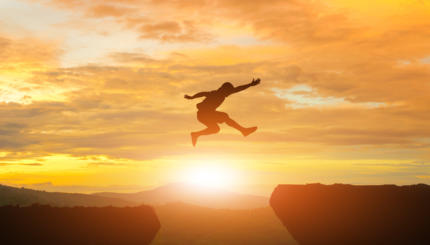 This spiritual trait isn't the absence of fear, but the inner strength to move forward anyway.

Moses teaches the people that their achievement of true fear of God will allow them to not fear any enemy.

Can Our Love Be Bigger Than Our Fear?

My fear is not very far below the surface. It rises when I hear about another shooting in Brooklyn, sometimes ...