I have an ambivalent relationship with mirrors. Looking at my image in one brings up emotions about how I look, so sometimes I avoid them. But a mirror image also can feel like a window, a portal into some other place. So it fascinates me that in Jewish folklore, mirrors are typically treated as portals to the spirit realm.

When I asked friends to name Jewish mirror customs, they had many to share. I learned that a Russian Jewish superstition warns against looking into a mirror at midnight because the dybbuks will be there and may enter your soul. A Syrian Jewish tradition suggests that one who looks into a mirror at midnight on Tisha b’Av will see one’s intended — but it may take ten years off their intended’s life. And in A. Fayvushinsky’s list of Jewish superstitions of Pruzhany, one is cautioned never to place a mirror face down, for this is a sign of death.

These customs suggest the world that lies behind the mirror is eerie or frightening. But mirrors also can be regarded as protective. In the fifth century, mirror plaques were used in Jewish homes and tombs as protective devices. Moroccan Jewish wedding ceremonies often included a gift of a mirror as a protective object for the bride. Moroccan custom also dictated that a mirror be thrown into the mikveh as part of an offering to the spirits, in order to avoid their jealousy. The mirror may offer protection by reflecting evil forces back toward themselves, or by inviting demons to pass through the portal back to where they came from. Mirrors were also sometimes used for divination practice, as in the North African Jewish divination practice of istinzal.

In fact, in Jewish mystical lore, the gift of prophecy itself is often described as a mirror. Both the Talmud and Kabbalah divide prophetic experience into the “bright mirror,” a kind of clear and direct prophetic experience often associated with Moses, and the “dark mirror,” the more enigmatic dreams and visions of other prophets. The Zohar even gives the divine feminine, the aspect of God that connects transcendent and corporeal worlds, the epithet of aspaklaria — literally “the mirror.” In these traditions, the mirror is a portal to divine wisdom, reflecting a deeper truth for those who are able to gaze within it.

One of my favorite tales of the mirror is in the midrashic work known as Pesikta d’Rav Kahana. According to this legend, Serach bat Asher, a granddaughter of Jacob, lives an impossibly long time, from Genesis all the way to the time of the Talmud. One day, she hears Rabbi Yochanan describing how the walls of water looked like window lattice at the crossing of the Sea of Reeds. “I was there,” Search responds. “And it wasn’t like that — it looked like glass windows.” In his book Tree of Souls, Howard Schwartz understands this to mean that the water became reflective like a mirror, “so that it seemed like an even greater multitude crossed there, not only those of the present, but those of the past and future as well.” In this telling, the miraculous path through the Sea of Reeds is one giant mirror portal, and the mirrors reflected not only the ones who crossed, but all who had gotten them to that point and all who would come after. The water walls are magic mirrors that reveal what is implicitly true but not entirely visible.

So the humble mirror that we may use to shave, put on makeup, or find out if we’ve got something stuck in our teeth actually may be a doorway to a world that will almost, but never quite, be ours. A world that reflects us but also lies beyond us.

So the next time you look in a mirror, don’t only look for a familiar image. There might be more there than meets the eye. 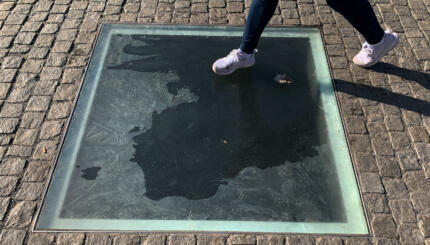 Jewish tradition offers a valuable perspective on creating a culture of remembrance.

This was a post that previous appeared on the MyJewishLearning/Jewish Book Council blog. As I write this blog post, I ...

Earlier this week, Rabbi Jill Jacobs wrote about  Sukkot and social justice and asked, “Does place matter?“ As I write ...