Mary Antin (1881-1949) immigrated to the United States in 1894 from Polotzk, Russia. In 1912, she published her autobiography, The Promised Land–one of the first English-language American-Jewish autobiographies. The introduction to the following excerpt says of Antin’s memoir:  “It is in many ways a paradigm of immigrant autobiography: the classic story of assimilation, told with enthusiasm and hope for the future. It remains today one of the most memorable and vivid depictions of Americanization….” Nevertheless, as the following excerpt makes clear, the family faced the difficulties many newcomers to the U.S. encountered.

Anybody who knows Boston knows that the West and North Ends are the wrong ends of that city. They form the tenement district, or, in the newer phrase, the slums of Boston. Anybody who is acquainted with the slums of any American metropolis knows that that is the quarter where poor immigrants foregather, to live, for the most part, as unkempt, half-washed, toiling, unaspiring foreigners; pitiful in the eyes of social missionaries, the despair of boards of health, the hope of ward politicians, the touchstone of American democracy.

The well-versed metropolitan knows the slums as a sort of house of detention for poor aliens, where they live on probation till they can show a certificate of good citizenship.

First Impressions of a New Home

He may know all this and yet not guess how Wall Street, in the West End, appears in the eyes of a little immigrant from Polotzk. What would the sophisticated sight-seer say about Union Place, off Wall Street, where my new home waited for me? He would say that it is no place at all, but a short box of an alley. Two rows of three-story tenements are its sides, a stingy strip of sky is its lid, a littered pavement is the floor, and a narrow mouth its exit.

But I saw a very different picture on my introduction to Union Place. I saw two imposing rows of brick buildings, loftier than any dwelling I have ever lived in. Brick was even on the ground for me to tread on, instead of common earth or boards. Many friendly windows stood open, filled with uncovered heads of women and children. I thought the people were interested in us, which was very neighborly. I looked up to the topmost row of windows, and my eyes were filled with the May blue of an American sky!

In our days of affluence in Russia we had been accustomed to upholstered parlors, embroidered linen, silver spoons and candlesticks, goblets of gold, kitchen shelves shining with copper and brass. We had featherbeds heaped halfway to the ceiling; we had clothes presses dusky with velvet and silk and fine woollen. The three small rooms into which my father now ushered us, up one flight of stairs, contained only the necessary beds, with lean mattresses; a few wooden chairs, a table or two; a mysterious iron structure, which later turned out to be a stove; a couple of unornamental kerosene lamps; and a scanty array of cooking-utensils and crockery.

And yet we were all impressed with our new home and its furniture. It was not only because we had just passed through our seven lean years, cooking in earthen vessels, eating black bread on holidays, and wearing cotton; it was chiefly because these wooden chairs and tin pans were American chairs and pans that they shone glorious in our eyes. And if there was anything lacking for comfort or decoration we expected it to be presently supplied–at least, we children did. Perhaps my mother alone, of us newcomers, appreciated the shabbiness of the little apartment, and realized that for her was as yet no laying down of the burden of poverty.

Our initiation into American ways began with the first step on the new soil. My father found occasion to instruct or correct us even on the way from the pier to Wall Street, which journey we made crowded together in a rickety cab. He told us not to lean out of the windows, not to point, and explained the word “greenhorn.” We did not want to be “greenhorns,” and gave the strictest attention to my father’s instructions….

The first meal was an object lesson of much variety. My father produced several kinds of food, ready to eat, without any cooking, from little tin cans that had printing all over them. He attempted to introduce us to a queer, slippery kind of fruit, which he called “banana,” but had to give it up for the time being. After the meal, he had better luck with a curious piece of furniture on runners, which he called “rocking-chair.” There were five of us newcomers, and we found five different ways of getting into the American machine of perpetual motion, and as many ways of getting out of it.

One born and bred to the use of a rocking-chair cannot imagine how ludicrous people can make themselves when attempting to use it for the first time. We laughed immoderately over our various experiments with the novelty, which was a wholesome way of letting off steam after the unusual excitement of the day.

In our flat we did not think of such a thing as storing the coal in the bathtub. There was no bathtub. So in the evening of the first day my father conducted us to the public baths. As we moved along in a little procession, I was delighted with the illumination of the streets. So many lamps, and they burned until morning, my father said, and so people did not need to carry lanterns. In America, then, everything was free, as we had heard in Russia. Light was free; the streets were bright as a synagogue on a holy day. Music was free; we had been serenaded, to our gaping delight, by a brass band of many pieces soon after our installation on Union Place.

Education was free. That subject my father had written about repeatedly, as comprising his chief hope  for us children, the essence of American opportunity, the treasure that no thief could touch, not even misfortune or poverty. It was the one thing he was able to promise us when he sent for us; surer, safer than bread or shelter.

On our second day I was thrilled with the realization of what this freedom of education meant. A little girl from across the alley came and offered to conduct us to school. My father was out, but we five between us had a few words of English by this time. We knew the word school. We understood. This child, who had never seen us till yesterday, who could not pronounce our names, who was not much better dressed than we, was able to offer us the freedom of the schools of Boston! No application made, no questions asked, no examinations, rulings, exclusions; no machinations, no fees. The doors stood open for every one of us. The smallest child could show us the way.

An immigrant's memoir of intergenerational conflict. 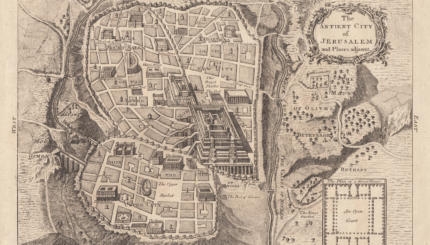 Warder Cresson's journey to Jerusalem, and to Judaism, took a convoluted path.