Halloween is such a strange time for many Jews.  Rabbis, educators, and day school directors remind their constituencies constantly about how un-Jewish it is, how pagan and Christian it is, how we shouldn’t participate. Aside from everything else, they say, “We’ve got an equivalent celebration of our own!” On Purim, Jewish kids get to dress up in silly costumes and receive goodies from friends and neighbors in the form of mishloach manot!

Meanwhile, these pronouncements are ignored by thousands of Jewish children who enjoy Halloween! What a great holiday! Candy, parties, candy, costumes, and candy! And no one is really aware of the origins, pagan or Christian, of the celebration — unless they’ve heard about it from their rabbi!

Before I go down this path any further I should say, in the interest of full disclosure, that my kids do not do Halloween. I haven’t ever forbidden them from trick-or-treating, but in the environment in which we live it’s a barely noticed ritual. That having been said, I want to re-examine the question of Jews and Halloween.

About 20 years ago, a friend and teacher of mine, Rabbi Everett Gendler, told me that in his shul they make “Ya’akov lanterns.” At the time I chuckled and filed the tidbit away without further thought, but the time has come to dust it off and think it through. We Jews have a long history of borrowing customs and rituals from the culture in which we live. Most of our Hanukkah traditions and rituals were borrowed, our end-of-winter Purim revelry bears a close resemblance to similar festivities in other cultures, and there is a long list of symbols at the Passover seder table that echo ancient pagan rites of spring.

The Jewish quality of these rituals, objects, and customs comes not in their uniquely Jewish origins, but in how we have adapted them to function as vehicles for uniquely Jewish meaning. So, for example, we borrowed a child’s spinning top from our Christian neighbors in medieval Germany. On the four sides of the top were written abbreviations for instructions on playing the game: nicht – nothing, ganz – everything, halb – half, and stell – put. On our tops we wrote the letters in Hebrew: nun, gimmel, hay, shin. But they still provided a digest of the rules of the game. Then we transformed the whole thing into a vehicle of Jewish meaning – nes gadol haya sham – a great miracle happened there.

Can we perform a similar transformation on Halloween? It is, after all, a well loved holiday for many people, and would thus be a highly attractive means of communicating some Jewish message. Let’s see what happens when we try.

First of all, we need a date for the celebration. The eve of All Saints’ Day is clearly not useful as a carrier of Jewish meaning. If we look at the Hebrew date equivalent of October 31 over a 20-year period (1989-2008) we find that, although it can fall as early as 28 Tishrei or as late as 26 Cheshvan, the average date is 11 Cheshvan.

Given the traditional imagery of the full harvest moon at Halloween, the full moon of Cheshvan seems a likely choice. But since, for American Jews, holidays that fall on Sunday allow for more relaxed celebration (since we can party late on Saturday night without concerns of work or school Sunday morning), I suggest the Motzei Shabbat (Saturday night) closest to the full moon (i.e., the 15th) of Cheshvan.

Now for the basic meaning-framework. The season of Halloween is roughly midway between the early fall harvest time marked by Sukkot and the dead of winter darkness kept at bay by the Hanukkah lights. The winter darkness is beginning to be apparent, as is the chill in the air. This is truly the season of transition to winter. I suggest, therefore, that the primary meaning of this new Jewish observance be the transition from a warm, light, outdoor world to a colder, darker world in which we seek indoor shelter.

The home, and the warmth and protection it provides, are central themes. We celebrate the physical haven of our homes, and the spiritual haven of long winter nights spent indoors with family or friends. This leads to a central symbol and a central mitzvah. The symbol is the Ya’akov lantern, the hollowed-out and carved pumpkin (carved, perhaps with Jewish symbols–Star of David eyes?) with a candle (kindled from the Havdalah candle) burning inside.

The pumpkin symbolizes the Jewish home–its walls are filled with nourishment, but there is ample room inside to create family experiences. It is lit with a warm glow which not only provides warmth and light for the inhabitants, but shines out as a beacon of invitation to those outside, as if to say, “Kol dichfin yaytay v’yaychol –all who are hungry, let them come and eat.” Of course, like its cousin the Jack o’ Lantern (and, coincidentally, like the Hanukkah candles), the Ya’akov lantern must be placed in a window, since an invitation is only genuine if others can see it.

The mitzvah of this holiday, in keeping with the increasingly apparent change of seasons, is the collection and distribution of warm clothes, coats, and blankets for those in need. The mitzvah requires a berakhah (blessing). The most likely candidate is “Blessed are You, Eternal God, Sovereign of the universe, malbish arumim–who clothes the naked.” Awareness of homelessness and the need to respond to the homeless would certainly be a related part of the day.

An important element of the celebration would be the custom of having children go from house to house to be given candy by householders who thus symbolically express their wish that the season of darkness and cold be a sweet one. If the holiday catches on, there will no doubt be special foods (perhaps pumpkin pie, apple cider, and “comfort foods”), songs, and so on.

The holiday needs a name, and here I am not sure where to go. My best thought so far is Chag Or Habayit — the holiday of the light of home.

Note that such a celebration is rooted in American seasons and weather (unlike Tu B’Shevat, for example, which celebrates trees in the dead of winter because spring is on the horizon in the Land of Israel). This would be a quintessentially American Jewish observance. Note too that the holiday, as I have described it, leaves out some crucial elements of Halloween, including witches, goblins, ghosts, and pranks. But our Jewish cultural borrowing has always been piece-meal. We adopt those elements that we can use, leaving others behind. If the holiday catches on, there may come a time when it is linked to some event in Jewish history, and when its connection to Halloween is largely forgotten.

These suggestions may sound tongue-in-cheek, but I intend them as a challenge. We who live in an open society, who no longer must fear the Evil Others among whom we live, must now begin to think through what elements of the ambient culture can enrich us. I am honestly not sure if I’m ready to carve a Ya’akov lantern, but I’m certainly willing to consider it. Are you?

No Trick, All Treat: Halloween Isn’t Bad for The Jews

Today’s guest post is from our friend (and one of our favorite scholars!) Dr. Joel M. Hoffman. Last year, we ... 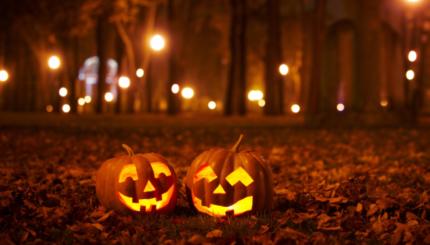