“Half of me is beautiful
but you were never sure which half.”
— Ruth Feldman, “Lilith”

Lilith is the most notorious demon in Jewish tradition. In some sources, she is conceived of as the original woman, created even before Eve, and she is often presented as a thief of newborn infants. Lilith means “the night,” and she embodies the emotional and spiritual aspects of darkness: terror, sensuality, and unbridled freedom. More recently, she has come to represent the freedom of feminist women who no longer want to be “good girls.”

Biblical and Talmudic Tales of Lilith

The story of Lilith originated in the ancient Near East,where a wilderness spirit known as the “dark maid” appears in the Sumerian myth “The descent of Inanna” (circa 3000 BCE). Another reference appears in a tablet from the seventh century BCE found at Arslan Tash, Syria which contains the inscription: “O flyer in a dark chamber, go away at once, O Lili!”

Lilith later made her way into Israelite tradition, possibly even into the Bible. Isaiah 34:14, describing an inhospitable wilderness, tells us: “There goat-demons shall greet each other, and there the lilit shall find rest.” Some believe this word “lilit” is a reference to a night owl, and others say it is indeed a reference to the demon Lilith. A magical bowl from the first century CE, written in Hebrew, reads:” Designated is this bowl for the sealing of the house of this Geyonai bar Mamai, that there flee from him the evil Lilith…” Ancient images of Lilith which show her hands bound appear to be a form of visual magic for containing her.

In the Talmud, Lilith becomes not only a spirit of darkness,but also a figure of uncontrolled sexuality. The Babylonian Talmud (Shabbat151a) says: “It is forbidden for a man to sleep alone in a house, lest Lilith get hold of him.” Lilith is said to fertilize herself with male sperm to give birth to other demons.

In Genesis Rabbah, we encounter a brief midrash that claims that Adam had a first wife before Eve. This interpretation arises from the two creation stories of Genesis: In Genesis 1, man and woman are created at the same time, while in Genesis 2 Adam precedes Eve. The rabbinic tale suggests that the first creation story is a different creation, in which Adam has a wife made, like him, from the earth. For some reason this marriage doesn’t work out,and so God makes Adam a second wife, Eve.

In the ninth or tenth century, a clever collection of legends titled the Alphabet of Ben Sira draws on earlier stories of Adam’s wife, and of Adam’s coupling with demons, and spins an elaborate story in which Lilith is Adam’s first wife:

As soon as Lilith saw this, she uttered the Divine name and flew up into the air and fled. Adam began to pray before his Creator, saying: “Master of the universe, the woman that you gave me has fled.” God sent three angels and said to them: “Go bring back Lilith. If she wants to come, she shall come, and if she does not want to come, do not bring her against her will.

The three angels went and found her in the sea at the place where the Egyptians were destined to drown. There they grabbed her and said to her: “If you will go with us,well and good, but if not, we will drown you in the sea.”

Lilith said to them:”My friends, I know God only created me to weaken infants when they are eight days old. From the day a child is born until the eighth day, I have dominion over the child, and from the eighth day onward I have no dominion over him if he is a boy, but if a girl, I rule over her twelve days.”

They said: “We won’t let you go until you accept upon yourself that each day one hundred of your children will die.” And she accepted it. That is why one hundred demons die every day. They would not leave her alone until she swore to them:”In any place that I see you or your names in an amulet, I will have no dominion over that child.” They left her. And she is Lilith, who weakens the children of men….

Some believe that this story is a serious attempt to explain the death of infants, while others are convinced it is a humorous tale of sexual quarrels and unsuccessful angels. The Lilith of this story confronts both Adam and God: she defies patriarchy, refuses a submissive sexual posture,and in the end refuses marriage altogether, preferring to become a demon rather than live under Adam’s authority. Notice that Lilith flees to the Sea of Reeds:the place where the Hebrews will one day go free from slavery. In this version of the Lilith story, Lilith becomes what all tyrants fear: a person who is aware she is enslaved.

This version of the Lilith tale in the Alphabet of Ben Sira quickly spread throughout Jewish life, and others expanded on it. The Zohar, a mystical work from 12th century Spain, imagines Lilith not only as the first wife of Adam but also as the wife of Satan. In the Kabbalah, Lilith takes on cosmic power. She is a chaotic counterpart to the Shekhinah (the feminine Divine Presence, the bride of the Infinite). In fact, the Zohar imagines that while the Jews suffer in exile, the Holy One (the masculine aspect of the Divine) separates from the Shekhinah, and consorts with Lilith.Lilith’s sexual-spiritual link with the Divine will only end when the Messiah comes and the brokenness in the world is mended.

In folk Judaism, the primary myths about Lilith continue to identify her principally as a stealer of babies. Numerous amulets for pregnant women and babies from medieval through modern times use the three names of the angels mentioned in the Alphabet of Ben Sira (Sanvi, Sansanvi, and Samangelof) to ward away Lilith. Such amulets may also contain a circle with the names of Adam and Eve on the inside of the circle, and the name of Lilith on the outside: a clear warning to Lilith to stay outside the family realm. A red ribbon is also sometimes placed on a crib to ward off Lilith.

In the modern period, the tale of the put-upon wife who flees to a place of liberation became a celebrated paradigm. Numerous modern Jewish poets and authors, female and male, wrote accounts of Lilith that use old stories to express new ideas.

Perhaps the best-known of the new Lilith tales is”The Coming of Lilith,” by Judith Plaskow. In this feminist midrash, Lilith flees the garden because she is an “uppity woman” who doesn’t want to be pushed around by Adam or God. However, she misses female companionship.Lilith soon sneaks back into the garden and befriends Eve. Eve has been told Lilith is a demon, but once the two women share their stories, they become allies and companions in the search for knowledge.

Enid Dame, in her poem “Lilith,” imagines Lilith as an eternal bohemian who leaves Eden, drops in and out of men’s sexual fantasies in the Middle Ages, and now lives with a cab driver in New Jersey,where she still cries in the bathroom as she remembers Eden “and the man and the God I couldn’t live with.”

In Lynn Gottlieb’s story of Lilith, Lilith is made from the sky and Adam from the earth. In her love for Adam, Lilith chooses to forget she came from the sky, and she becomes Eve, settled and happy but ignorant of her own true nature. In her story, Gottlieb dramatizes the struggle of women to love men while still loving themselves.

On the other hand, Jacqueline Lapidus’ brief poem”Eden” imagines a lesbian encounter between Lilith and Eve. Using the Lilith legend, Lapidus invents an origin story for love between women. Scholar and author Ohad Ezrachi frequently writes about Lilith as a split-off sexual component of women, an image created by men fearful of a full relationship. He encourages men and women to see Lilith and Eve as the same person.

Lilith has become such a popular figure that whole enterprises (like the women’s music concert Lilith Fair and the Jewish feminist journal Lilith Magazine) are named after her. Once a source of fear, Lilith has been transformed into an icon of freedom. While some disapprove of this widespread embrace of a former demon, Lilith’s rehabilitation makes sense. The frightening character of Lilith grew, in part, out of repression: repression of sexuality, repression of the free impulse in women, repression of the question “what if I left it all behind?” As modern Jews begin to ask questions about sex, freedom, and choice more directly, Lilith becomes a complex representation of our own desires.

There are more of these fantastic Jewish creatures than you might think. 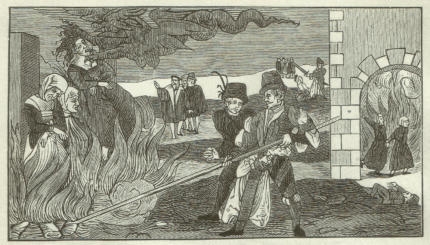