Solomon was the son of King David, the last sovereign of the ancient Kingdom of Israel, builder of the first Jerusalem Temple, and is traditionally viewed as the author of three biblical books: Ecclesiastes, Proverbs and Song of Songs. He was renowned for his wealth, wisdom, abundance of wives and concubines, and the peacefulness of his reign. Later in his life, he would succumb to the temptations of idol worship, for which he was punished by having his kingdom split into competing domains with his son ruling over the smaller one.

Virtually all of what is known about Solomon comes from biblical accounts and other ancient texts, and scholars are divided on how accurate they are. Little archaeological evidence has been found to corroborate the Bible’s florid descriptions of Solomon’s wealth and the lavish construction projects he undertook in Jerusalem, though that may be due in part to the difficulty of digging in a city at the epicenter of centuries of religious and political strife.

Whatever the historical facts, Solomon looms large in Jewish tradition — and beyond it. Two of his works are read in synagogue on fixed days in the calendar — Ecclesiastes on Sukkot and Song of Songs on Passover. The final chapter of Proverbs, the hymn known as Eishet Hayil, is customarily sung at the Shabbat evening meal. But Solomon — and his temple specifically — is also a central symbol of the Freemasons, who often name their lodges temples (or even King Solomon’s Lodge). Legends of Solomon’s ability to control demons, create gold out of other materials and perform other supernatural feats have been embraced by adherents of magic and occultism since medieval times.

The Life of Solomon

Solomon reigned over the kingdom of Israel about a millennium before the dawn of the Common Era. The most extensive account of his life is found in I Kings. There we learn that he was the son of Bathsheba, the woman David famously saw bathing on a roof and took for a wife after sending her husband away to die in battle. After assuming the throne upon David’s death, Solomon began carrying out a purge, ordering the death of his older brother Adonijah, who had sought to usurp the throne, and Joab, the commander of his father’s army.

The source of Solomon’s wisdom is contained in a story related in the third chapter of I Kings, which describes God coming to Solomon in a dream and offering to grant him a wish. Rather than ask for riches or power, Solomon asks for wisdom. This response pleases God, who responds by granting him wisdom along with the riches and glory and long life that he didn’t ask for. Solomon thus became the wisest of all men. “I grant you a wise and discerning mind; there has never been anyone like you before, nor will anyone like you arise again.” (I Kings 3:12)

This incident is followed in I Kings by what is perhaps the most famous Solomon story of all, in which two women come before him both claiming to be the mother of a baby. Solomon calls for a sword and says the solution is to cut the baby in two and give one half to each woman. One of the women is amenable to this solution, but the other protests, saying she would rather give the child up than see it killed. Solomon thus determines that the latter woman is the child’s mother. As the final verse of the chapter relates, the story burnished Solomon’s credentials as the possessor of transcendent wisdom: “When all Israel heard the decision that the king had rendered, they stood in awe of the king; for they saw that he possessed divine wisdom to execute justice.” (I Kings 3:28)

Solomon’s kingdom was vast, wealthy and prosperous. According to the biblical account, he possessed 1,400 chariots and 12,000 horses and presided over a significant trading enterprise. Solomon’s reign was also a peaceful one.

With those blessings in hand, he determined to build a temple in Jerusalem in fulfillment of a promise God had made to David that his son would build a house for God. He secured cypress and cedar wood from Lebanon and hewn stone from the finest quarries, and the interiors were overlaid with gold and adorned with carved reliefs of cherubim and palm. Construction took seven years.

The Temple was by far the most important construction project Solomon undertook, establishing Jerusalem as the locus of Jewish prayer to this day. But it was not the only thing he built. He also built a lavish palace fashioned from hewn stone, choice woods, and bronze. I Kings describes the details of this palace at length, including the size and materials of all its various structures as well as the decorative elements. He also fortified cities elsewhere in his kingdom, in Hazor, Meggido and Gezer, and built garrison towns.

Solomon’s retinue of consorts was also legendary — 700 wives and 300 concubines, according to the biblical account. Among these was the daughter of the Egyptian pharaoh, whom Solomon set up in her own residence in Jerusalem. Only one of Solomon’s wives was ever named — Naamah, the mother of Jeroboam, who would succeed Solomon in ruling over the split kingdom of Judah.

Among the more enigmatic stories of Solomon’s dalliances is his encounter with the Queen of Sheba, a story told twice in the Bible (in the 11th chapter of I Kings and then again in the ninth chapter of I Chronicles) and elaborated upon in later Jewish sources. In the biblical narrative, Sheba hears of Solomon’s legend and travels to Jerusalem to meet him with a large entourage. According to the text, Sheba is so impressed with Solomon’s wisdom and palatial surroundings she is left breathless. She gifts Solomon gold, spices and precious stones before returning home. A later tradition suggests the two had a relationship that resulted in a child who would eventually give rise to Nebuchadnezzar, the Babylonian king who would destroy Solomon’s temple in 586 BCE.

Solomon’s many wives included women from nations that God had commanded the Israelites never to marry lest they lead their husbands to worship foreign Gods. And this is precisely what happened to Solomon, who began to worship foreign gods and even build shrines to them. As punishment, God decided to take the kingdom away from Solomon, but out of deference to his father, God does so only after Solomon’s death, leaving only one tribe for his son to rule.

The Talmud offers conflicting takes on Solomon’s piety. Some rabbis labor to rehabilitate him, which requires some heroic feats of exegesis, as the text in I Kings is rather explicit in multiple places that Solomon sinned, even going so far as to assert that he committed “evil” in God’s eyes and was not loyal to God like his father King David. Other talmudic sources are more frank about Solomon’s wrongdoing. In an echo of the legend about Solomon siring the lineage that would ultimately lead to the destruction of the temple, the Talmud records a teaching that after Solomon married pharaoh’s daughter, an angel implanted a reed into the sea and a sandbar grew around it that was the eventual site of Rome, which destroyed the Second Temple in 70 CE.

In Jewish life, Solomon’s influence is felt primarily through the three canonical works that are traditionally ascribed to him: Song of Songs, Proverbs and Ecclesiastes. Scholars are generally dubious of the truth of this claim, but the rabbinic tradition is mostly unambiguous that these three are works of Solomon, not least because Solomon is mentioned as the author in the opening verse of all three (or in the case of Ecclesiastes, “son of David.”).

There is a tradition that the three works are products of three stages of Solomon’s life: the youthful eroticism of Song of Songs, the middle aged wisdom of Proverbs, and the life retrospective of Ecclesiastes. All three are also read at major observances of the Jewish calendar. Ecclesiastes is read publicly in synagogues on the Shabbat of the Sukkot festival, and Song of Songs is read on the Shabbat of Passover. Eishet Hayil, an ode to the “woman of valor” which is the final chapter of Proverbs, is traditionally sung by men to their wives just prior to the Friday night meal.

The legend of Solomon has also been embraced by the Freemasons, the fraternal organization said to trace its origins to the stonemason guilds of medieval Europe. For the spiritual heirs of these stone cutters, Solomon’s temple, whose craftsmanship was thought to be unequalled in the ancient world, remains a powerful metaphor for personal development. “This structure depicts the capabilities of men when they work collaboratively, using the right tools to diligently develop themselves in order to be better for the world,” one Masonic website says.

Solomon has also long had a presence among enthusiasts of magic and the occult. The origins of this likely trace to a strange story in the Talmud in which Solomon, seeking the secrets necessary to build the temple, has an encounter with Ashmedai, the prince of the demons, in which he tricks him into helping him with its construction. The story makes mention of a ring inscribed with God’s name, which would come to be known as the Ring of Solomon, a symbol popular in medieval magic.

Solomon died after ruling for 40 years and was laid to rest in Jerusalem. He was the last ruler of the united Kingdom of Israel. After his death, he was succeeded by his son Rehoboam, who was rejected by the ten tribes in the north, splitting the kingdom between the Kingdom of Israel (led by Jeroboam) and the smaller Kingdom of Judah (led by Rehoboam). Solomon’s reign is therefore remembered, in many respects, as a golden era in Israelite history. 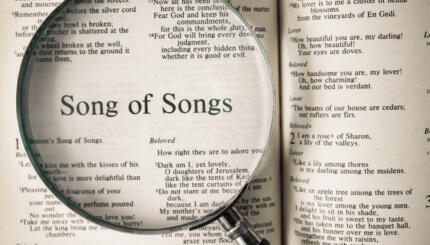