Today’s daf features a short but powerful passage describing the death of Rabbi Yehuda HaNasi, the editor of the Mishnah and one of the most significant personalities of the early rabbinic period. The story is often cited in the context of discussions about the ethics of end-of-life care, for reasons that will become obvious. It begins with this:

On the day that Rabbi Yehuda HaNasi died, the sages decreed a fast, and begged for mercy. And they said: Anyone who says that Rabbi has died will be stabbed with a sword.

Distraught by the impending death of Rabbi Yehuda HaNasi, the sages do what many of us do when faced with the loss of a loved one: They pray as a means to stay the hand of God and keep their teacher alive. They even go so far as threatening anyone who dares to say that Rabbi Yehuda has passed on.

Initially, the rabbi’s maidservant joins the rabbis in trying to keep him alive. Here’s how the Gemara describes her prayer:

Intimately aware that her master’s end is near, the maidservant too is not ready to let go and pleads to God that the request of the lower realms prevail over the upper ones — i.e. that Rabbi Yehuda be allowed to continue living on earth. But then something happens to change her perspective.

When she saw how many times he would enter the bathroom and remove his tefillin, and put them back on, and how he was suffering, she said: May it be the will of God that the upper should impose upon the lower.

Once she notices how often Rabbi Yehuda had to visit the bathroom — he evidently suffered from intestinal disease — and the suffering he was enduring, she reverses her prayer. Now she asks that the will of the upper realms prevail over the lower ones. The only problem was the prayers of the rabbis were efficacious and, as long as they continued, Rabbi Yehuda could not die. So in an attempt to end his suffering, she is moved to act.

She took a jug and threw it from the roof to the ground.

The noise of the jug falling from the roof distracts the sages from their prayers, which are keeping him alive, thus enabling Rabbi Yehuda to die.

When our leaders and loved ones near the end of their lives, we often turn to prayer, as the rabbis did, in the hope that their lives will be extended. But when their discomfort morphs into terminal suffering, sometimes we follow the example of maidservant and seek a merciful death that will relieve their pain. Finding oneself in a space in which the desire to hold on comes face to face with the reality that it is time to let go is a painful feature of the human experience. In this text, it is the maidservant who recognized that this moment has arrived and that Rabbi Yehuda’s need to be relieved of his suffering outweighed the desire of his colleagues to extend their time together.

Contemporary scholars have looked to this text to shed light on contemporary ethical dilemmas, like whether it’s permissible to remove impediments to death for terminally ill patients who are clearly suffering. But the Talmud does not, setting aside for the moment its inclination to measure and quantify, argue and debate. It remains silent — leaving the maidservant’s actions to stand unchallenged.

Read all of Ketubot 104 on Sefaria.

This piece originally appeared in a My Jewish Learning Daf Yomi email newsletter sent on October 19th, 2022. If you are interested in receiving the newsletter, sign up here. 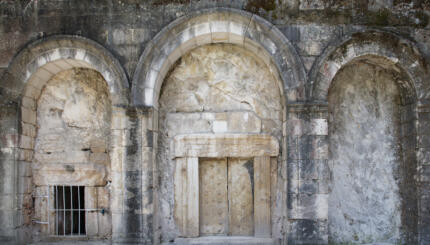 The editor of the Mishnah is one of the most significant figures in rabbinic Judaism.