The rabbis generally referred to morality by the phrase bein adam la-havero (“norms between man and his fellow-man”), which was included in the term derekh eretz (“ways of the world”). From various expressions by some of the most authoritative rabbis, it could be inferred that morality was deemed one of the central components of Judaism: “Simon the Just said, ‘The world stands on three things: Torah, avodah (“divine service”), and acts of lovingkindness’” (Avot 1:2). Hillel said, “What is hateful to yourself do not do to your fellow-man. This is the entire Torah, the rest is commentary. Go and study” (Babylonian Talmud, Shabbat 31a).

In terms of the content of the morality of Judaism, the basic meaning of key moral terms such as mishpat (“justice”), tzedakah (“righteousness”), chesed (“kindness”), and rachamim (“compassion”) is much the same as what is understood by current philosophic analysis. Yet there are special qualities to the morality of Judaism, which, in turn, seem to be the result of distinctive approaches.

The involvement of God in the moral struggle imparts a quality of urgency and passion which is unique to Judaism. “For I know their sorrows,” says God (Exodus 3:7) and “… it shall come to pass that when he cries out unto Me that I shall hear” (Exodus 22:26). Hence the “hysterical” tone of the prophets. Injustice cannot be tolerated. Cruelty and human suffering shake the foundations of society. Judaism did not introduce new definitions of moral terms but rather revealed the true source of morality: God rather than man, prophecy rather than wisdom. Therefore, man could no longer be complacent about the moral situation. “Righteousness was asleep until it was awakened by Abraham” (Midrash Tehillim, Psalms 110).

In Judaism, the realm of morality is not restricted to deed but rather includes man’s inner world of consciousness: thoughts, emotions, intentions, attitudes, motives. All are to a degree subject to man’s control and qualify for moral judgement. Thus the Bible warns against coveting (Exodus 20:14; Deuteronomy 5:18), against hating one’s brother (Leviticus 19:17), against “hardening one’s heart” (Deuteronomy 15:9,10), while the rabbis inveighed against envy, desire, and anger (Mishnah Avot 2:11) and noted that “thinking about transgression may be worse than transgression itself” (Babylonian Talmud, Yoma29a).

Biblical sensitivity to the harm as well as the good that could be done by speech was unprecedented: “Death and life are in the power of the tongue” (Proverbs 18:2 1). Man must be careful not to lie, curse or slander (Leviticus 19:11,14,16), nor to receive a false report or speak evil (Exodus 23: 1, Deuteronomy 19:16-18). The rabbis also condemned the use of flattery, hypocrisy, and obscene speech and urged the practice of clean, pleasant, and non-abusive language. In terms of the good that could be achieved by speech, the rabbis encouraged proper greetings to all, the need to cheer people with good humor, rebuke properly, and comfort with words in times of bereavement (Babylonian Talmud, Bava Batra9, Ta‘anit. 22a). The halakhah [Jewish law]endowed the spoken word with legal force and in the area of vows and oaths applied the biblical teaching: “He shall not breach his word, he should do according to all that proceeds from his mouth” (Numbers 30:3).

In the ancient world, animals were sometimes venerated as gods or exploited for work or sport with extreme cruelty. The morality of Judaism includes concern for man’s relationship to all living creatures. They are seen as junior partners in the building of civilization and therefore entitled to rest on the Sabbath (Exodus 20:8-10). Since “the Lord is good to all and His tender mercies are over all His works” (Psalms 145:9), man must follow suit: “A righteous man regards the life of his beast” (Proverbs 12:10). Man must provide for those animals he has domesticated and must not cause them any unnecessary pain (Babylonian Talmud, Bava Metzia 32b). A number of biblical laws seem to aim at preventing “anguish” and “frustration” to animals, particularly in regard to their care for their young (Exodus 23:5; Leviticus 22:27,28; Deuteronomy 22:4,6,7,10, 25:4). The rabbis prohibited causing animals pain for the sake of sport or hunting when not for the sake of food, and permitted experimentation with living creatures only when it seemed likely to lead to practical advances in medical treatment.

Concern for the dignity of man is another distinctive feature of the morality of Judaism, expressing itself primarily as respecting each person’s privacy and being careful not to cause anyone shame or embarrassment. The rabbis incorporated into the halakhah a special category of’ “shame” or “indignity” in awarding compensation for damages caused one’s fellow (Babylonian Talmud, Bava Kama 8:1). In this area, they showed their awareness of the irreducible dignity or worth shared by every human being, as well as their sensitivity to the individual needs of people depending upon each one’s self-image and standing in life.

Reprinted with permission from Encyclopedia of Judaism.

The concept of Tza'ar Ba'alei Chayim demands that we take animal suffering seriously. 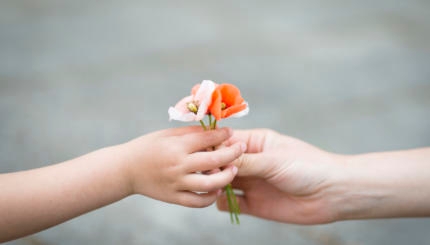 This phrase, which literally means "the way of the world," refers to acts of decency that are commendable if not formally mandated.

A mother's reflections and suggestions.