Moses addresses the Israelites one last time, recounting the giving of the Torah and blessing them tribe by tribe. The Israelites are standing on a mountain overlooking the Jordan Valley from the east, but Moses will not be allowed to enter the Land of Israel with the rest of the people. He dies, and is buried; the story of the Torah is now finished, and the story of the judges and prophets begins.

“And this is blessing by which Moses, the man of God, blessed the Israelites before his death.” (Deuteronomy 33:1)

The final chapter of the Torah contains a very condensed history of the Israelites since Sinai, and a specific blessing for each of the 12 tribes.

I want to focus on the subtle observations of the greatest darshan (commentator) of them all, Rashi. I’ve tried to show how close readings of the Torah text enable us to find layers of meaning that a quick glance cannot reveal — and nobody does this better than our friend from medieval France. Rashi notices every word: In the verse above, he seems to be picking up on the apparently unnecessary phrase, “before his death.” (After all, could Moses have blessed the people after his death?) Thus, Rashi’s explanation, based on earlier sources:

“before his death”–“before” [Hebrew lifney] means close to his death, for if not now, when?

In his usual terse manner, Rashi hints at the urgency of Moses’ blessing, imagining that Moses felt that his death was imminent and this was his last chance to impart any final words of wisdom to the people he had shepherded for 40 years. Moses could put off no longer any words which he longed to speak, for this opportunity was fleeting.

Now, if we stopped right here with Rashi’s midrash, we’d have a powerful reminder that words between intimates cannot be postponed indefinitely, for no one knows the day of his or her death. If you want to bless your loved ones, or say anything else of significance, do so now, for you might not have the warning that Moses received that his days were soon ending. This is solid wisdom, often repeated, and still true for the repeating.

Yet Rashi hints at something else, as well. The phrase “If not now, when?” was almost certainly known to him as part of a larger statement in the name of Rabbi Hillel, from the section of the Talmud called Pirkei Avot [“Ethics of the Ancestors”]:

Now Rashi’s midrash takes on a different meaning, for it hints that Moses’ blessing of the tribes was prompted by a whole philosophy of life, not just the urgency of imminent death. Moses could have said nice things to everybody and died basking in the adoration of the people — but “what am I” if I don’t speak the truth, even if it’s not pleasant? After all, his blessing for the tribe of Reuben — that they “live and not die” — is rather lukewarm, probably recalling earlier prophecies concerning their forefather Reuben in Genesis 49.

On the other hand, Moses is quite willing to mention his own role in the people’s history, claiming in verse 3 that the Torah was “commanded by Moses,” although it came from God. Again, think of our saying from Pirkei Avot: “If I am not for myself, who is for me?” Even though he was called a very humble man, he had every right to remind the people of what he actually did. Perhaps this gave his blessings more legitimacy and his words greater power.

By linking Moses blessing to Hillel’s mini-philosophy of self-examination, Rashi seems to be offering an interpretation of the entire chapter, not only of this one verse. According to this reading, Moses spoke out of a sense of urgency, a sense of truthfulness, and a legitimate desire for recognition of his real contributions. Thus, Moses’ final blessing also becomes his final moment of teaching us by the example of his life, a life dedicated to ideals, actions, and truth. That’s what makes him Moshe Rabbenu [“Moses our teacher”], not just Moses the leader. 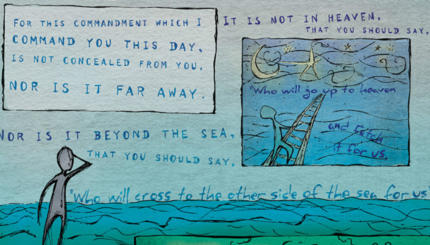 Moses' final address to the Jewish people takes on added significance because of its proximity to his death. 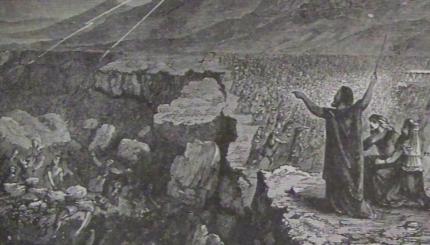