Morning services on Rosh Hashanah and Yom Kippur are broadly similar in structure to all Jewish festival services. But both holidays feature many — and in some communities, lengthy — additions that can make the services difficult to navigate. Here’s a guide.

Rosh Hashanah and Yom Kippur morning services begin with the morning blessings (Birkot Hashachar) and the extended version of Pesukei d’Zimrah (Verses of Praise) that is recited on Shabbat and other holidays. This part of the service is virtually identical to what happens in synagogue on a regular Shabbat morning.

The service begins to take on a distinct High Holiday character as it closes in on the recitation of the two central prayers of the daily liturgy, the Shema and the Amidah.

On both Rosh Hashanah and Yom Kippur, the Amidah includes a unique section that begins ובכן תן פחדך (“And you shall instill awe”), which invokes the idea of God’s sovereignty over the world and the joy that the righteous derive from submitting to God’s will. The Yom Kippur morning Amidah also includes the day’s first recitation of the confessional Viddui prayer. (Viddui is not recited on Rosh Hashanah, but it is traditionally said five times over the course of Yom Kippur.)

In communities where the prayer leader publicly repeats the recitation of the Amidah, this is commonly the place where the first liturgical poems, known as piyyutim, are inserted. These poems are among the most distinctive features of the High Holiday liturgy and they are typically recited responsively or sung in unison, often with the Ark open and the congregation standing. The particular selection of piyyutim, and their placement in the service, can vary widely

The best-known piyyutim come later in the day, but one of the best-known during the morning service is Imru Layloheem. Roughly translated as “give praise to God,” this poem both extolls God’s glory (“The splendor of His throne is fiery blazes, His ministers are fiery flashes”) and God’s omniscience (“He knows what is hidden in darkness, darkness conceals nothing from Him.”).

The final prayer of this part of the service is Avinu Malkeinu (“Our Father, Our King”), a series of petitions that, in many synagogues, culminates in the communal singing of the final line: “Our father, our King, be gracious with us and answer us, though we have no worthy deeds; treat us with charity and kindness and save us.”

As with all Jewish festivals, Rosh Hashanah and Yom Kippur have particular Torah readings associated with them.

On Rosh Hashanah, the Torah reading comes from Genesis. Traditionally, the reading for the first day is the story of the birth of a son to Abraham and Sarah in their old age and Abraham’s casting out of Hagar and Ishmael from his home. The second day reading is the story of the binding of Isaac, Abraham’s aborted attempt to sacrifice his son, which is a recurring theme in the liturgy and imagery of the High Holidays. In communities that observe only one day of Rosh Hashanah, it is common to read the chapter about the binding of Isaac.

On Yom Kippur, the Torah reading comes from the Book of Leviticus and describes the scapegoat ritual, the rite performed on the Day of Atonement in the ancient Temple in Jerusalem in which a goat is symbolically invested with the sins of the people and then cast off into the wilderness.

The Torah service on both Rosh Hashanah and Yom Kippur also features the reading of the haftarah, an accompanying selection from the prophets. The reading for the first day of Rosh Hashanah is from the Book of Samuel and tells the story of Hannah, the childless woman who turns to God in prayer and is eventually blessed by giving birth to a prophet. The second day reading, from the Book of Jeremiah, features a prophecy of Israel’s eventual restoration. The Yom Kippur haftarah describes the harsh criticism of Isaiah of people who mistakenly believe that repentance can be achieved with superficial acts of fasting and physical abstinence that lack spiritual conviction and charitable deeds.

One of the highlights of the Rosh Hashanah service is the blowing of the shofar, the ram’s horn. This is commonly done after the Torah reading just before the scrolls are returned to the Ark, though some synagogues also sound additional shofar blasts during Musaf or at the very end of the prayer service. The shofar service begins with the recitation of a selection of biblical verses (mainly from Psalms) and two blessings: over the hearing of the shofar and the Shehechiyanu blessing over firsts. The blowing of the shofar then commences, most commonly with a “caller” who calls out one of the three types of blasts and the blower who sounds them.

Yom Kippur is one of four times during the year when Jews recite the Yizkor service. This memorial prayer is primarily recited by children for deceased parents, but many synagogues also include prayers for victims of the Holocaust and departed members of the local community. In Ashkenazi communities, Yizkor features the haunting El Maleh Rachamim prayer. And in some synagogues, it is customary for people with both parents living to briefly step outside the synagogue while Yizkor is recited.

The final portion of the morning service is Musaf, the additional service, which on both Rosh Hashanah and Yom Kippur features some of the best-known and most powerful prayers associated with the High Holidays. Musaf typically begins with the prayer leader’s recitation of Hineni, a meditation asking permission to pray amongst sinners, and is followed by the recitation of the silent Amidah.

The silent Musaf Amidah differs between the holidays. On Rosh Hashanah, the Musaf Amidah concerns three of the main themes of the day: malkhuyot (kingship), zikhronot (remembrance) and shofarot (shofar blasts). On Yom Kippur, the silent Musaf is essentially identical to the earlier Amidah.

The repetition of the Musaf Amidah is marked by several much beloved prayers:

Unetaneh Tokef: This haunting composition ascribed to Rabbi Amnon of Mainz includes the famous litany “who shall live, and who shall die,” and concludes with the reassuring refrain that repentance, prayer and charity can remove the evil decree.

V’Chol Ma’aminim: This poem, whose title translates to “We All Believe,” is a reassuring counterpoint to Unetaneh Tokef with its many professions of faith that there is an underlying order to the universe.

Aleinu: This familiar prayer, which closes virtually every daily prayer service, enjoys prominent placement in the High Holidays Musaf, and is the occasion for the only time of the year where many Jewish will fully prostrate themselves on the floor in a gesture of complete submission to God.

The Ten Martyrs: Recited only during the Yom Kippur Musaf, this emotional section recalls the brutal killing of ten Jewish sages at the hands of the Romans.

Priestly Blessing: On both Rosh Hashanah and Yom Kippur, many synagogues will recite the ancient benediction that the priests recited in the ancient Temple in Jerusalem. In many communities, the descendants of the priests will ascend to the front of the congregation and drape their prayer shawls over their hands for this prayer.

What liturgy goes with which holiday, and where you can find it. 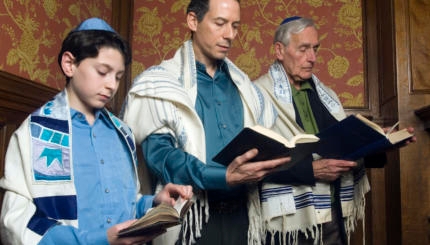 This "additional" service is recited on Shabbat, major Jewish holidays and on Rosh Chodesh.

Each and every holiday in the Jewish calendar comes with its own unique set of insertions into the prayers intended to celebrate the special character of that festival.