Al Hanisim — Pronounced ahl hah-nee-SEEM. Literally “on the miracles,” the prayer added to the Amidah prayer and Birkat Hamazon (blessing said after meals) during Hanukkah.

Dreidel (also commonly spelled dreydel) — Pronounced DRAY-dull. A spinning top with four sides, each marked with a different Hebrew letter and each indicating a different play in this game.

Hanukkah Gelt — Gelt is the Yiddish word for money. Today, Hanukkah gelt is more often used to identify the foil-covered chocolate coins, which are a popular part of many Hanukkah celebrations.

Hanukkiyah — Pronounced hah-noo-kee-YAH or hah-noo-KEE-yuh (oo as in boot). Literally “Hanukkah lamp,” it is more commonly referred to as a menorah (see below). It contains nine candle-holders, one for each night of Hanukkah and one to hold the Shamash (see below). 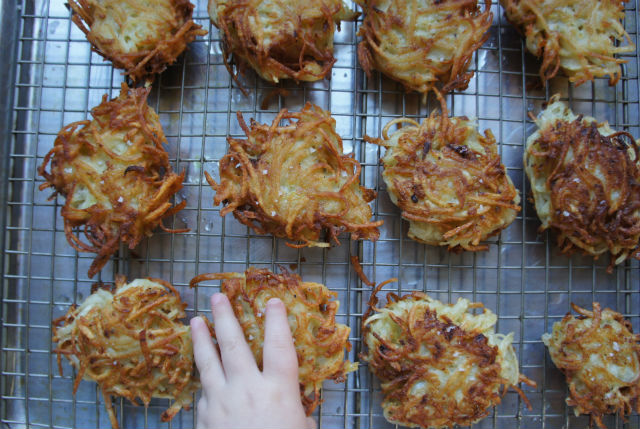 Maccabees — Pronounced MACK-uh-bees. The family of religious zealots who triumphed over the Syrian Greeks and liberated the Temple.

Menorah— Pronounced muh-NOHR-uh. Literally “lamp,” it originally was used only to describe the seven-branched candelabrum that was used in the ancient Temple in Jerusalem. However, the hanukkiyah used on Hanukkah is commonly referred to as a menorah.

Shamash (also often spelled shammash) — Pronounced shah-MAHSH. Literally “the helper,” the candle on the Hanukkiyah that is used to light the other candles.